Ocean’s 8 & The Specter of the “Gender-Flipped” Movie

Ocean’s 8 is a film I have been looking forward to since it was announced (well, since Rihanna was attached to it) and from everything I’ve seen, it looks like a damn good time with some of the best actresses around in film and television. Not to mention three women of color, who are not the same race! Gasp. Yet, there is nerd-raged filled albatross hanging from its neck: isn’t this just a lady version of the original?

From the moment the female-driven Ghostbusters was announced, fanboys were livid. What about the original cast? Well, Bill Murray doesn’t care and Harold Ramis sadly passed away in 2014, so there was most likely never going to be the Ghostbusters reunion OG fans wanted.

The female-led reboot starring Melissa McCarthy, Kristen Wiig, Kate McKinnon, Leslie Jones, and Chris Hemsworth was an attempt to update the series and probably cash in the 80s nostalgia cash cow. Little did they know how deep misogyny goes.

Despite being, domestically, the highest-grossing live-action comedy of 2016, because of how much the movie cost ($144 million) vs what they made ( $229 million worldwide—an 85 million dollar profit), it is considered a flop. Now, was the movie itself great? It depends on who you ask.

I didn’t love it, but it was also not the garbage fire haters wanted it to be. It was a serviceable film that wasn’t allowed to be a film, it has to be a statement.

Before it had been released, it was being spammed by anti-lady Ghostbusters, that ended up making it the most disliked movie trailer on Youtube. They also went to IMDB and gave the film a 3.5/10 rating before any screenings took place, let along it being released to a general audience.

Thankfully, the Ocean’s 8 film is not being treated in the same way. Only the first trailer has a slightly overzealous thumbs down rating, and it seems like the actresses they’ve collected are just too cool and talented for anyone to really pull out the nonsense. (You can also make an argument that a movie starring eight very traditionally attractive women, who even in the trailer are dressed in gorgeous gowns and are super glamorous, is an easier sell to sexist men than four funny women in action-comedy playing scientists and wearing jumpsuits.) 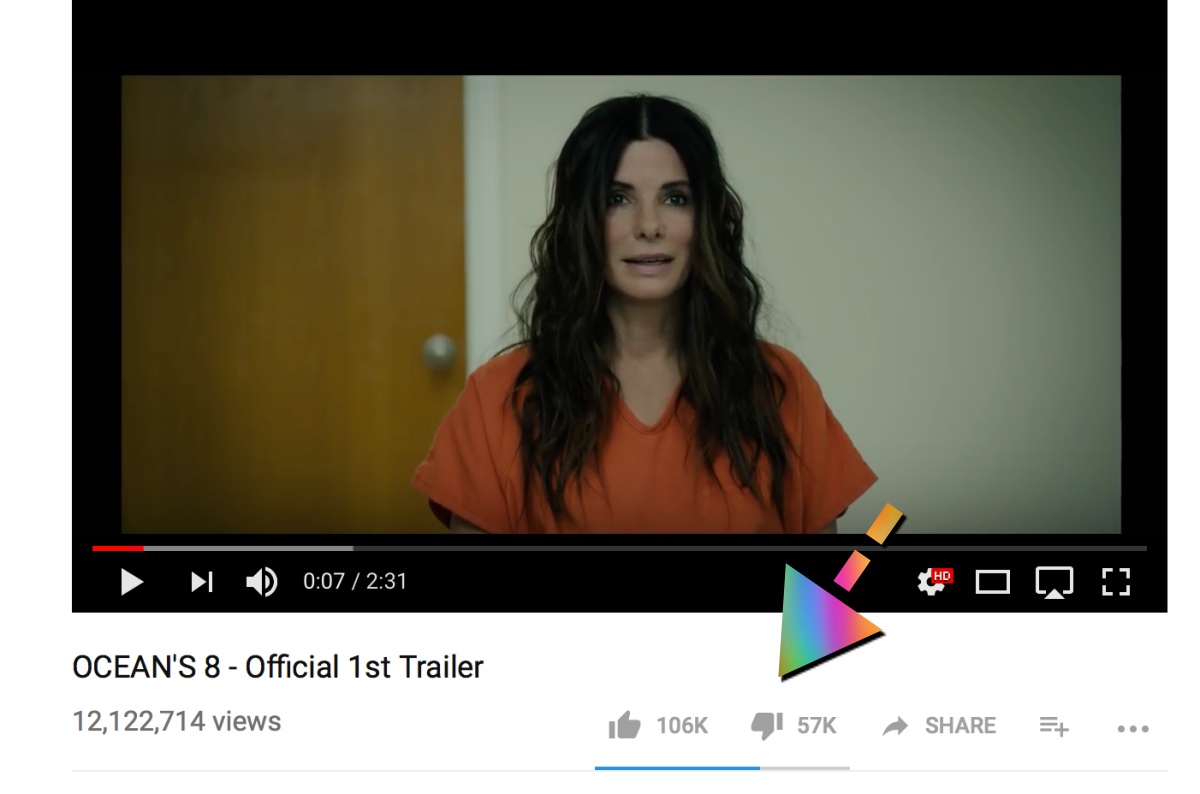 Yet, if you look at the comments, if there is a complaint, it’s “why ladies?”

“Heist movies don’t have a gender,” says Ocean’s 8 scripter Olivia Milch, 29, in her interview with The Hollywood Reporter. Milch acknowledges that audiences “are going to be hesitant” and that “you want to make something its own and to be true to the new characters you are creating.” However, the idea that this story is being ruined or that it can have no value because it’s a remake is absurd.

We want this movie to be good because it’s well written, not because it stars all-women, and to just go in with good faith, not assuming this movie has a “feminist agenda.”

Regardless of people’s feelings about the genre switching it’s going to continue. Overboard the gender-switched remake of the 1987 film did well, despite mixed reviews from critics. 2019 will bring us a gender-bent Dirty Rotten Scoundrels movie, starring Anne Hathaway and Rebel Wilson, and What Women Want, with Taraji P. Henson. We have a female Doctor and at this rate, we will probably have a female Bond before long and Spielberg has already said he’s open to a female Indiana Jones.

So it’s time to embrace that gender is a construct.

(Side note, if there is not a single queer woman in this film I am going to be so nettled.)