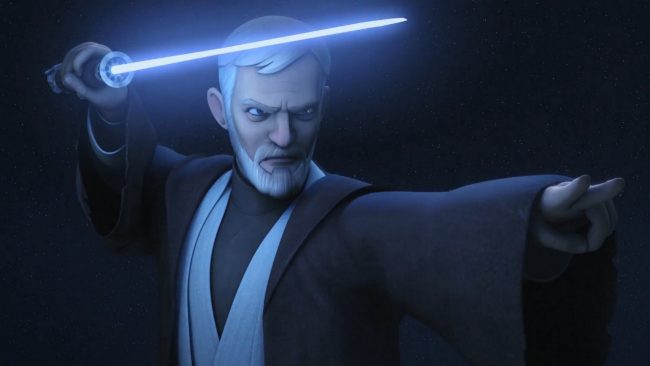 “Twin Suns,” the latest episode of Star Wars Rebels, is a beautifully crafted 22 minutes of storytelling, and one of the best Star Wars tales to date. Showrunner Dave Filoni, who co-directed and co-wrote this episode, has repeatedly insisted that the Lucasfilm creative group would only bring in a fan-favorite character like Alec Guinness’ Ben Kenobi if the addition would contribute to protagonist Ezra Bridger’s own journey. In other words: no fan service for the sake of fan service in these parts. Indeed, Ezra is an integral part of “Twin Suns,” and he learns valuable lessons about the freedom to choose one’s own destiny and the importance of loyalty to one’s family. But the episode also ties up Obi-Wan Kenobi’s arc in a narratively satisfying bow, and has repercussions for the influence of the saga at large.

“Twin Suns” begins with a stooped, disconsolate Maul (his “Darth” days are well behind him) dragging himself through the unforgiving Tatooine desert on a final, desperate mission to find and kill his old enemy, Obi-Wan Kenobi, once and for all. As performed by the excellent Sam Witwer, Maul’s deranged howl echoes through far-off canyons, lamenting with a single word (“Kenooooobiiii!”) his lifetime of darkness and failure. But then it comes to him: all he has to do to draw out Kenobi is to “tempt his noble heart.”

Enter Ezra Bridger: Ezra is drawn to Tatooine by the Sith Holocron, rebelling against the wishes of Space Mom and Dad, Hera and Kanan, as he attempts to warn Master Kenobi of Maul’s impending attack. The parallels to A New Hope are numerous: impetuous but well-meaning teenage boy wanders around the Tatooine wasteland with a sassy astromech droid, gets waylaid by Tusken Raiders, and is eventually rescued by old hermit Ben Kenobi.

Venerated voice actor Stephen Stanton was tapped to play the voice of Ben Kenobi, and his Guinness impression is spot-on. “Old Ben’s” entire aura is impeccably invoked: the scuffed-up design of his boots, the slow, measured gait, the professor-like clasping of the hands within his tattered brown robe, the affectionate patting of the droid. It would be eerie if it weren’t so comfortingly familiar. Ben’s conversation with Ezra over the crackling fire is also reminiscent of his conversations with Luke, including a revised edition of Ben Kenobi’s much-maligned statement about the nature of the truth and “a certain point of view.”

However, “Twin Suns” is not just an homage to the beloved Star Wars episodes of the past: it also adds thematic nuance and character depth in a way that truly bridges (yes, hence Ezra’s last name) the gap between the prequels and the original trilogy, and between the character of Obi-Wan Kenobi and Ben Kenobi. The long-awaited rematch between Kenobi and Maul is surprisingly–but appropriately–short, and the aftermath illustrates just how big of a “noble heart” Ben Kenobi really has.

Obi-Wan Kenobi has led a pretty tragic life: Qui-Gon Jinn died in his arms (thanks to Maul), Satine Kryze died in his arms (thanks to Maul), and his beloved and troubled padawan, Anakin Skywalker, betrayed Obi-Wan and the entire Jedi Order that he holds dear. If anyone is due for a John Wick-style revenge tale, it’s Obi-Wan–undoubtedly that’s where all of the Sith!Obi-Wan AU fanfic comes from. But “Twin Suns” gives us the opposite of this wish fulfillment, foregoing the tempting path of anger; after all, revenge is not the Jedi way. When Maul derides Ben Kenobi for his current state of squalor–“Look what has become of you!”–Ben responds with, “Look what I have risen above.” We know from Obi-Wan’s conversation with Darth Vader during their duel in A New Hope that whenever Obi-Wan Kenobi is struck down, he rises again more powerful than before. And that power is not fueled by anger, but by an boundless capacity for forgiveness, and by embracing a purpose larger than himself.

“If you define yourself by your power to take life,” Ben tells Maul in “Twin Suns,” “Then you have nothing.” Maul is a husk of his former self, driven purely by hatred and spite, seeking death–Obi-Wan’s or his own. But Ben Kenobi has a purpose: watching over and protecting Luke Skywalker. Ben is his usual placid self until Maul begins to inch towards the reason behind Ben has remained on Tatooine, at which point Ben’s expression flickers slightly. It is only when Maul hits on the truth that Ben Kenobi ignites his lightsaber – in defense, not in anger. Here, Ben embodies the true Jedi ideal, embracing his role not as a fierce Clone Wars general but as a protector.

The fight itself, as well as the conversation beforehand and the aftermath, demonstrate how much Obi-Wan Kenobi has changed over the decades. As explained by this fabulous Rebels Recon video from the Star Wars YouTube account, Maul comes at Ben with the same move he used to kill Qui-Gon Jinn all those years ago–but this time, Ben is expecting it, and he defeats his old adversary with one fell swoop. That is a wonderful exhibition of growth, as displayed in all the best instances of storytelling: when a character encounters a similar situation, and acts differently. When Maul and padawan Obi-Wan Kenobi initially faced off in The Phantom Menace, Obi-Wan summons his grief and vivisects Maul in a fit of rage, but here, old Ben Kenobi has found his peace, and now he helps Maul find his. 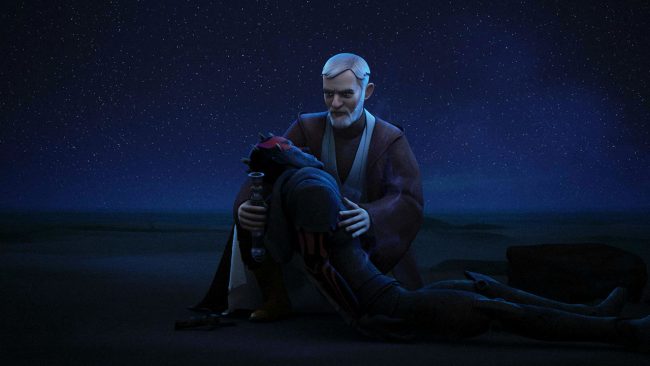 The defining element of the “Twin Suns” duel is its brevity. Their fight is mercifully short because Ben knows what he has to do, but does not revel in the violence of the act. After striking the swift killing blow, we are treated to a gut-punch of a familiar image: Obi-Wan Kenobi cradling a dying being. This time, it is not his father figure or his lover, but the person (broadly speaking) who killed them both. It’s an incredible act of forgiveness on Obi-Wan’s part, and a lesson to us all.

If Obi-Wan Kenobi can forgive the one who caused him so much suffering, who inflicted such personal pain, perhaps we, too, can learn to look across the aisle and offer an olive branch to the people we believe have wronged us. As rabbi and philosopher Jonathan Sacks writes in The Dignity of Difference:

Forgiveness breaks the chain… It represents a decision not to do what instinct and passion urge us to do. It answers hate with a refusal to hate, animosity with generosity. Forgiveness means that we are not destined endlessly to replay the grievances of yesterday. It is the ability to live with the past without being held captive by the past. It would not be an exaggeration to say that forgiveness is the most compelling testimony to human freedom. It is about the action that is not reaction.

This is a theme that Star Wars has embodied from the conclusion of the original trilogy, with Luke’s refusal to kill his father, and Darth Vader’s subsequent redemption before his death. In “Twin Suns,” Ben Kenobi drives home the importance of forgiveness as a way of moving forward towards a new hope (#sorrynotsorry) rather than wallowing in the agony of the past as Maul did. Indeed, the final shot of the episode, of Ben watching a young Luke run to his Aunt Beru in the distance, provides the perfect coda to Ben’s journey and paves the way for the hero’s journey we know is yet to come.