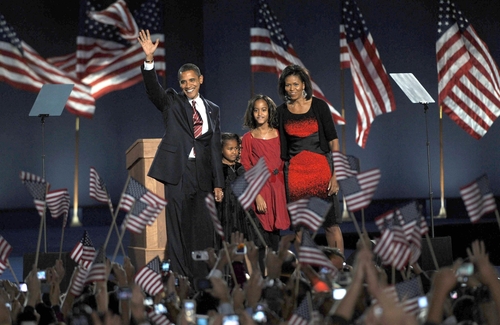 I’ve always admired President Barack Obama for the way he talks about gender, not only in relation to policies and activism, but for the simple act of effortlessly going back and forth between gendered pronouns, often within the same story or sentence, whether it’s in a pre-written speech or an impromptu answer to a question. It’s clear that when he thinks of abstract, hypothetical examples to illustrate his points, he just as easily imagines women in his head as men, believing in gender equality at a fundamental level.

And so, it’s no surprise that he would be the kind of man to write about the feminist responsibilities of men. In a wonderful essay for Glamour Magazine, President Obama writes unabashedly about being a feminist, what shaped his feminist views, the sexist shortcomings of his past, and what having daughters has taught him about what men need to do to help in the fight for gender equality.

When he speaks of his early life, he first talks about the fact that the most important people in his life—his single mother, his grandmother who helped raise him, and his wife—are women, and that as he’s gotten older, he sees how far women have come. However, he also acknowledges his own struggles with the version of masculinity society prescribes, as well as knowing that he didn’t do enough to put his money where he mouth is as far as an equal division of labor between him and Michelle.

He reveals and acknowledges that “I was often away from home serving in the state legislature, while also juggling my teaching responsibilities as a law professor. I can look back now and see that, while I helped out, it was usually on my schedule and on my terms. The burden disproportionately and unfairly fell on Michelle.”

Yes, there are policies that need to be put in place, or enforced, but according to the President, the real changes will begin when we as individuals start challenging the way we think about gender, and he is optimistic about that happening:

“It is absolutely men’s responsibility to fight sexism too. And as spouses and partners and boyfriends, we need to work hard and be deliberate about creating truly equal relationships.

The good news is that everywhere I go across the country, and around the world, I see people pushing back against dated assumptions about gender roles. From the young men who’ve joined our It’s On Us campaign to end campus sexual assault, to the young women who became the first female Army Rangers in our nation’s history, your generation refuses to be bound by old ways of thinking. And you’re helping all of us understand that forcing people to adhere to outmoded, rigid notions of identity isn’t good for anybody—men, women, gay, straight, transgender, or otherwise. These stereotypes limit our ability to simply be ourselves.”

It’s heartening that he not only believes in gender equality, but that he understands and includes people outside the gender binary when talking about that. President Obama is a great example of someone who is genuinely putting the work in, and I’d recommend not only reading the full essay at Glamour, but passing it around to any men in your life.