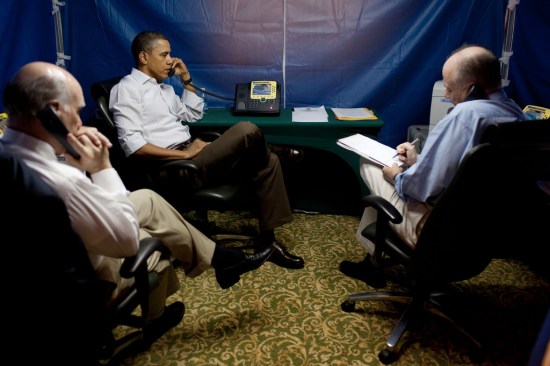 What might first appear as a bizarre juxtoposition with the leader of the free world apparently on a camping trip inside a tent within a hotel room is actually one of the most information-secure locations in the world. This photo, recently released on the White House Flickr account, shows President Barack Obama inside a portable Sensitive Compartmented Information Facility, or SCIF, while traveling in Brazil. During his trip, the President used the SCIF to conduct high-level meetings regarding the escalating military situation in Libya.

Generally speaking, a SCIF is any space that has been specially prepped to prevent information within it from being intercepted by someone outside of the SCIF. The layers of protection are elaborate, as SCIFs are designed to prevent all levels of electronic observation, and can cost up to $200 to $5,000 per square foot to set up in the Baltimore/Washington area SCIFs are in high demand.

The mobile SCIFs are set up when the President or other official is away from the security of Washington and need to carry out secret business. While the details are classified, the mobile SCIFs are soundproofed, use only hard-wired connections, sport electronic countermeasures, and use a secret blue tarp-like material that prevents electronic transmissions from escaping. Phil Lago, founder of SCIF provider Command Consulting Group, likens their protection to a “ring of electronic waves” which prevent signals from getting in or out of the tent.

Even after the careful assembly of a SCIF, which sometimes contain their own air supply, there are further environmental concerns such as the concentration of people nearby and the relative position of windows. And all of this anti-snooping technology can now be fit into two large trunks. Of course, SCIFs don’t rely entirely on high-tech gizmos to keep information safe. Layers of security personal, cameras, and even fences can be involved in making an area secure.

The high-cost and breathtaking requirements of the mobile SCIF certainly seem absurd to civilians like you and me who can keep their conversations secret simply by whispering. Although government extravegence is a frequent target for critics, the value of a mobile SCIF seems self evident. Even while traveling in South America, the President remained in command while fighting escalated in Libya, and was able to do so because the space was secure.

(BBC via The High Definite, image via White House Flickr)