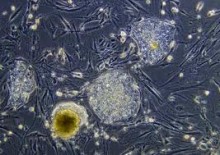 Last year, President Obama issued an executive order to remove “limitations on scientific inquiry” affecting human embryonic and non-embryonic stem cell research. Yesterday, a federal judge named Royce C.  Lamberth may have slapped those limitations back on when he ruled against Obama’s order, saying that it violated a law first passed in 1996 and renewed each year since that bans “research in which a human embryo or embryos are destroyed, discarded or knowingly subjected to risk of injury or death.”

Judge Lamberth issued a temporary injunction that returns federal policy to the “status quo” — only nobody knows what that means, and the distinction is not a trivial one for many scientists whose work involves embryonic stem cells.

For scientists, the problem with the judge’s reasoning is that it may render all scientific work regarding embryonic stem cells illegal — including work allowed under the more restrictive policy adopted by President George W. Bush in 2001.

Under the Obama administration, private money was still needed to obtain the embryonic stem cells, but federal money could be used to conduct research on hundreds more stem cell lines, as long as donors of embryos signed consent forms and complied with other rules.

Private and state funding for stem cell research is unaffected by the injunction, but its impact could still be significant: According to the Wall Street Journal, “hundreds of millions of dollars in federal funding” could be affected should the judge’s ruling hold up against a possible appeal by the US government.

(via NYT. Title image via HowStuffWorks.)