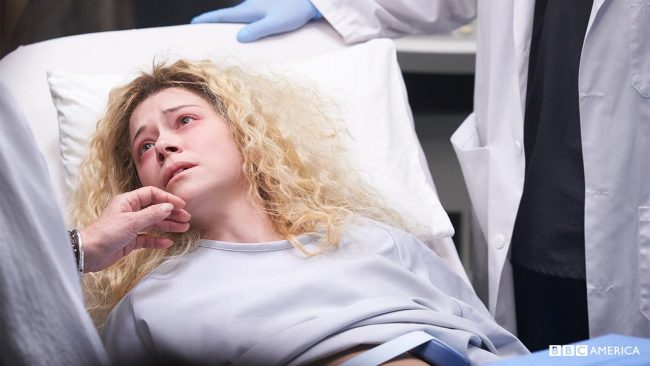 Nina: The penultimate episode (can you believe that there’s only one episode left?) of Orphan Black was all about Helena, who is about to deliver her babies.

Casey: Unfortunately, Helena has gotten herself captured by Coady and Westmorland, and their intentions are to further their personal research using Helena’s babies. Of particular interest is the babies’ cord blood – the blood from the placenta and umbilical cord that remains after birth and contains stem cells. It is becoming more and more common for people to save cord blood after they give birth due to the myriad uses these stem cells provide. Today there are almost 80 different diseases, varying from cancers to blood disorders, in which cord blood stem cells can be used as a cure.

Nina: Westmorland is ready and eager to perform a cesarean section to claim Helena’s babies but Coady stops him. According to her, a cesarean section could have unpredictable epigenetic effects. The differences and benefits of c-sections versus vaginal births have long been studied for their impacts on health, and it’s been known that babies delivered via c-section tend to develop more immune diseases, asthma, and allergies. For one thing, babies born by c-section aren’t exposed to the microbes in their mother’s vaginal tract, which can have impacts on how their immune functions and gut flora (digestive functions) develop.

For another: birth is a stressful experience, but that stress plays out differently depending on how the baby is born. Typically, a vaginal birth has a gradual build of stress as it’s pushed out, but a c-section creates a sudden shift from one environment to a new one. More than one study has remarked that these differences in stress experiences mark different patterns of methylation on their DNA. Methylation is a process that can change the activity of a DNA sequence and dictate whether a gene is expressed or not (as a rule, more methylation = repressed gene expression). Methylation is important for normal development and processes, but when it happens where it shouldn’t (or doesn’t happen where it should) it can cause problems.

We saw methylation mentioned once earlier this season, when Cosima was looking at Aisha’s medical files. She found that Aisha had low promoter methylation, which meant that a region of DNA that should have been “turned off” wasn’t and was causing Aisha to develop tumours. One study that looked specifically at methylation of hematopoietic stem cells (the blood cell-producing stem cells found in bone marrow) in babies born vaginally versus babies born by c-section found major differences in methylation in genes linked to metabolism and immune function.

Westmorland doesn’t so much care about these potential epigenetic impacts as long as they don’t affect his would-be “fountain of youth” gene. For Coady, however, keeping these changes to a minimum is critical.

Casey: Of course, Coady doesn’t want the cord blood for therapeutic uses. Getting her hands on these stem cells would provide her with a limitless source of clone genome for experimentation. While it may not be the exact genome as Project Leda, these stem cells are similar to cells obtained from Kira – they contain enough of the clone genome to make them worthy of Neolution’s interest.