... or, Rachel Duncan and the tablet of infinite betrayal. 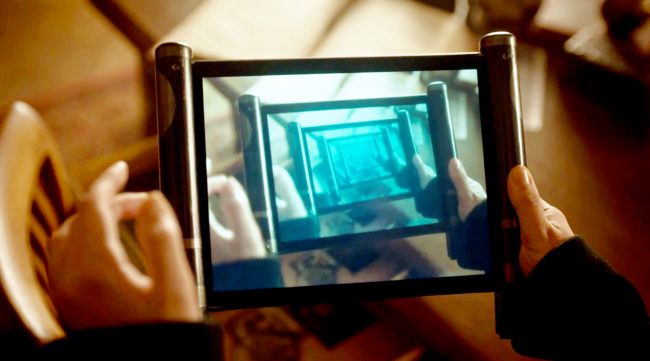 Casey: The latest episode of Orphan Black was definitely an intense one. Flashbacks of Rachel showing us the beginnings of her icy demeanor at a young age, the fate of Kira and her eggs up in the air until Rachel’s rebellion to save her, and Alison’s new haircut all left us at the edge of our seats. And what a way to end the episode, am “eye” right?

Nina: In our science recap for the season 4 episode “The Mitigation of Competition”, we speculated about the technologies behind Rachel’s cybernetic eye. The gist of what we learned back then was that Neolution has extremely sophisticated technology and that existing vision replacement tech (like the Argus II implant) require bulky headsets and transmitters and are limited to very simple high contrast images, like a white cross on a black background. In this latest episode we learn that Westmorland has been spying on Rachel’s doings through her eye this entire time, perhaps even receiving audio from her eye device (but I’m banking that Westmorland somehow bugged her office for audio, otherwise her entire plan would have quickly fallen apart), and has the ability to transmit images to her eye (whether gory swan heads or his own disapproving mug) using his tablet. This is basically the same sort of augmented-reality tech that lets you have animated Pokèmon overlaying a live camera feed from your phone, except this one was wired right into Rachel’s optic nerve. Hold on while I flashback to 2009 and dust off the “there’s an app for that” meme.

Casey: Due to Rachel’s discovery of Westmorland’s “eye spy cam”, Rachel once again experiences enucleation—that is, the removal of the eye while leaving the muscles and orbital contents intact (usually done when removing a tumor-filled eye with the hopes of leaving enough intact for a transplant). Of course this time, Rachel wasn’t under anesthesia, and the eye wasn’t removed by surgical professionals. Instead, Rachel used her trusty friend the martini glass to stab-stabbity-stab her eye out. This required her to 1) get the sharp end of the martini glass stem under the eye and into the eye socket, 2) sever the rectus and oblique muscles attaching the eye to the socket, and 3) sever the optic nerve, releasing the eye from all of its connections. Pretty intense stuff to do on yourself with only the aid of vodka.

Nina: Or gin? Whatever the case: Rachel preps for her self-surgery (if we can really call it that) with a lot of alcohol. People have been using alcohol as an analgesic since ancient times, but to be honest, the science literature on how it works (and the methodologies used for testing) isn’t great. It’s unclear if the mechanism for pain relief and numbing are from direct effects of alcohol on neurotransmitters, indirect effects on your own emotional or affective state, or some combination of both. But when it’s all said and done, the effects of alcohol on pain are highly variable and don’t happen in everyone. Rachel clearly figured she’d take the gamble and that the payoff of removing her own eye was worth the risk of severe pain. Considering she didn’t immediately pass out the moment she started pulling out her eye, the enormous amount of alcohol that she consumed must have been satisfactory to numb her enough to get the job done.

Now we’re left wondering what’s next for Rachel: more rebellion? Redemption? Or something else entirely?