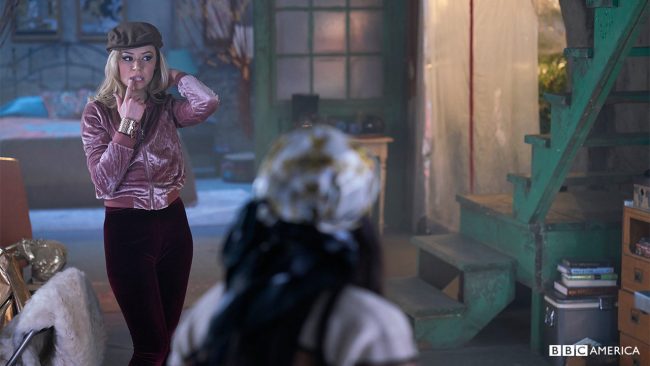 Nina: Krystal’s back and ready to take down big cosmetics (while looking cute). After her friend’s hair falls out in a reaction a stolen lotion that leads back to the Dyad Group, Krystal has an investigative date with Len Sipp, CEO of BluZone Cosmetics and discovers that the mystery lotion was a bad batch of a dermal delivery system for gene therapy (which makes me wonder why the heck Len is just leaving failed and potentially dangerous fancy lotions lying around at parties).

Dermal delivery (AKA absorbing through the skin) could be great because it wouldn’t necessarily rely on a viral vector (finding the right vector was the major challenge for Cosima’s cure development last season). One thing that makes dermal delivery challenging is the skin’s natural function as a barrier. The outermost layer of the skin, the stratum corneum, has a major lipid component, so most research has looked into delivering drugs and therapies through the skin by manipulating lipid-based vesicles or liposomes (and there’s definitely research out there specifically looking to use this technology for tissue regeneration).

To Krystal’s horror, Len has tested his product on bunnies, but for dermal delivery, rodents are probably not the best model. Mouse skin, for example, is much thinner and contains more hair follicles which increases the odds for transdermal delivery.

Casey: We also learn in this episode that Westmorland has been using parabiosis in an attempt to increase his lifespan. Parabiosis refers to the sharing of blood circulation between two organisms. For scientists in the laboratory, this usually refers to experiments in which two mice are attached at the skin (literally sewn together side-by-side) and microvessels form at the union site, allowing the animals to share blood circulation.

In parabiosis experiments, scientists found that if you joined together an old mouse with a young mouse, the old mouse began showing signs of age reversal – that is, the old mice appeared to become younger when sharing the blood of a young mouse. Westmorland is building off this idea, taking plasma donations (without proper consent for their usage) from the children on Revival and injecting this “young plasma” into his bloodstream. His goal is to prolong his life via factors within the children’s blood. Pretty creepy.

Back to BluZone, in case it isn’t clear what Neolution might want with BluZone’s dermal delivery system, a hint is in the company’s name. Remember Delphine’s trip to Sardinia? Westmorland identified Sardinia as a goldmine for his quest for prolongevity, but it definitely isn’t the only area of world known for its exceptionally long-living. Demographers Gianni Pes and Michel Poulain identified five geographical hotspots that seem to have the highest concentrations of people living into extreme old age and called them “Blue Zones”. Sardinia is one of them; the others are Okinawa, Japan; Nicoya, Costa Rica; Icaria, Greece; and Loma Linda, California, USA (specifically the Seventh-day Adventists in this last case).

These areas represent somewhat isolated communities, which has made them draw researchers hoping to identify a genetic component. Pes and Poulain also spent some time observing these populations to identify common lifestyle factors. What they found was exactly the sort of stuff we’d expect would contribute to longer, healthy lives: among other factors, these groups tended to practice regular physical activity, favor plant-based diets, smoke less, and spend more time socially engaged with their communities. But all of that obvious stuff doesn’t seem to be interesting enough to Westmoreland — regeneration in a lotion bottle is more his speed, and in true Neolution style, once they nail down their longevity solution, they’re definitely going to commodify it and sell longevity to people who can afford it.