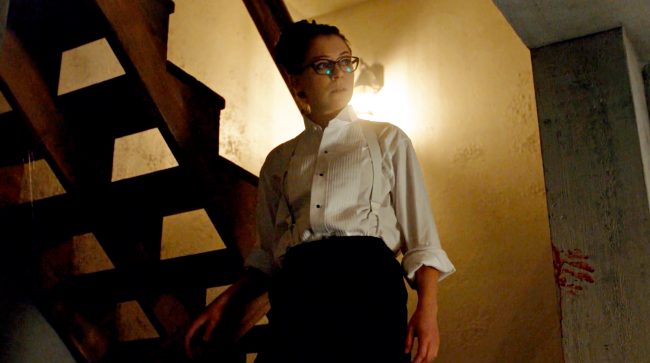 Nina: This was the Cosima Episode! And in true geek-monkey style, it was packed with science content. We got to see Cosima push boundaries, though not without pushback—if that’s what you would call getting locked in a cage with a dead body. Yikes. But the point is: Cosima has been piecing together Westmorland’s whole deal and is calling him out.

Casey: Cosima cracked Westmorland’s so-called “fountain”: the Lin28a gene. This gene is expressed during normal development and regulates the self-renewal of stem cells. Its expression at a specific time is important for proper timing and location of organ and tissue development; however, this gene expression must be turned off at the proper time. If expression isn’t turned off, the results can be catastrophic. For example, Aisha’s cancer, known as Wilm’s tumor, is due to abnormal expression of Lin28a. Of course, we learn that Westmorland isn’t trying to cure her cancer, but he is instead manipulating it in order to further study his gene of interest.

We learn that Yanis was originally of interest to Westmorland because of his abnormal expression of Lin28a. While he came to Westmorland as a normal child, the manipulations of Lin28a in his genome led to the growth of numerous tumors and the change in his personality and demeanor. This episode also brought to light the fact that Susan synthesized Lin28a from Yanis’ genome and put this mutated form of the gene into the Leda genome. This was then passed down to Kira, which is why she is of such interest to Susan and Westmorland.

Nina: Susan told Cosima in season 4 (“Human Raw Material”) that Leda were meant to be baselines with known genetic manipulations. Since we know that, at least from the Neolutionist standpoint, Project Leda was about getting this controlled expression of Lin28a to manifest as healing and tissue regeneration. The only issue is that Lin28a was not expressed in the Leda clones. It’s only by accident that Sarah and Helena are fertile clones and we could see that the sequence that Susan synthesized wasn’t a total dud—it just needed a second generation to manifest. We’re seeing evidence of it in Kira and in Helena’s twins. Surely, if the other clones hadn’t been “barren by design,” then they probably could have produced children with similar traits.

The major difference between Kira’s mutation and what we see in Aisha and Yanis is that Kira’s mutation is self-regulating. It expresses tissue regeneration but it keeps itself in check instead of tipping over into the cancerous uncontrolled cell growth and division.

It’s interesting that Westmorland has put all of his chips on Lin28a. Cosima calls him out on this, telling him that “it’s never about one gene.” While Lin28a is nicknamed the “fountain of youth” gene, there are hundreds of genes tied to aging and age-related diseases that have been proposed as candidate prolongevity genes. It should be noted, though, that the interactions between genes, their protein products, and other regulatory elements don’t make for a straightforward process. There are so many factors that influence expression, which is why Westmorland’s tinkering with Yanis’ genome produced so many effects and didn’t yield the specific result Westmorland craved.

Now please let Cosima out of the cage.