And we shall drink from the fountain first! Welcome back to our Orphan Black science recaps, where Casey, a graduate student in genetics and developmental biology, and Nina, a professional science communicator, examine the science in each episode of OB and talk you through it in (mostly) easy-to-digest terms.

Nina: And we’re back for another season (and we’re definitely in denial that this is the final season).

Casey: Time to begin our final trip through the crazy science of Orphan Black!! And we certainly started off with a bang! Or should I say an ominous growl from a mysterious monster!! The premiere started us off right where we left off: Orphan Black’s own version of The Island of Doctor Moreau, in a strange village known as Revival.

Nina: While Sarah is trusting a pointy stick to keep her safe as she treks through the Island’s woods to find Cosima, Cosima and Charlotte are navigating Revival. A peppy new acquaintance, Mud, tours Cosima around and reveals its founder to be P.T. Westmorland (the same P.T. Westmorland who founded Neolution). Yeah … and according to Mud he’s just celebrated his 170th birthday.

Cosima, being Cosima, is skeptical, but Delphine confirms this and explains that Revival, that the entire island, is a decades-long prolongevity study. They’re searching for keys to life extension, the “fountain” that Rachel mentions in her speech. 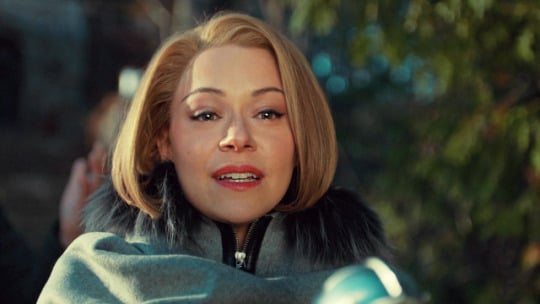 And may the odds be ever in your favor. (image via themomentofhappiness)

Casey: Revival in essence is the heart of Neolution. It is a self-sustained community of believers, where Neolutionism can live out, bringing to life the ultimate goal of human perfection. People come from all over the world so that Neolution can find answers to their problems. For example, we see a little girl named Aisha whose mother has brought her to Revival in hopes of curing her cancer.

Nina: Delphine has a role to play as part of Revival (she tells Cosima that everyone has their own part to play. What will Cosima’s part be?) Outside of running Revival’s only clinic, Delphine is also sent to conduct research in other countries, just like she did as part of Dyad. Her next stop? Sardinia.

If P. T. Westmorland is interested in longevity, then Sardinia is significant. Sardinia is an island region of Italy known for its large population of centenarians and supercentanarians (AKA people who are older than 110 years). What’s especially neato about Sardinia is that it has a significant population of centenarian men (it’s common enough knowledge that women tend to have longer life spans than men, and this is likewise true for examples of extreme old age). It’s also home to one of the largest and oldest biobanks in the world. The biobank has been collecting genetic samples from Sardinians for almost two decades as part of a project to identify the genes that might be responsible for their extreme old age. (Fun fact: back in September 2016 the Sardinian biobank made the news when it was thought that thousands of the Sardinian DNA samples had been stolen. It turned out that they had just been moved over to a nearby hospital some time earlier and not everyone had gotten the memo.)

I’m sure we’ll be finding out more about Revival and P.T. Westmorland’s experiments as the season unfolds.