Kira's still not a lizard. 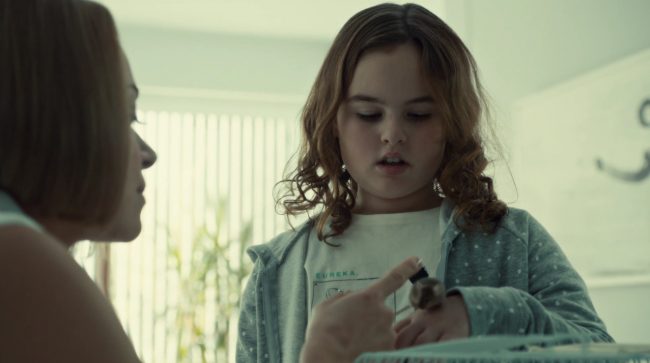 Forget lizards — Kira’s looking to mice to learn more about her biology.

Nina: Remember in season one when Kira got hit by a car and was … fine?

Casey: Well it turns out that wasn’t just a stroke of luck. There is something special about the offspring of Leda clones in that they can self-heal at a pretty fast rate. Kira managed to heal from getting hit by a car in the time it took to get to the hospital and Helena’s baby healed itself after impalement by the time Helena awoke from surgery. It definitely seems like this has something to do with the synthetic sequences in the Leda genome.

Nina: Rachel says herself that she thinks it must come down to something in Kira’s genes (and Kira confirms that Cosima thinks so, too).

Casey: Why would Helena’s babies be of even more interest to Rachel and Neolution than Kira? Well, simply put, they are still in utero, and there are many tissues associated with the fetus and the placenta that contain stem cells that would be of interest to those wishing to study the children’s genomes. While things like cord blood and placental tissue aren’t ever-lasting, they can provide an excellent basis for Neolutionists to begin experimentation. And as the kids grow, they will continue to provide usable samples such as their baby teeth, making them a much more viable source of material than Kira.

Nina: As for Kira … Rachel gifts her with a mouse. As if it isn’t a symbolic enough gift to give Kira the moment she becomes part of Rachel’s experiment, this isn’t any ordinary laboratory mouse: it’s an African spiny mouse (Acomys sp.). As Rachel describes, the spiny mouse has the ability to regenerate skin and fur, not to mention glands, and some cartilage and fatty tissue, but not muscle, without forming any scar tissue (scar tissue doesn’t have glands or hair follicles). Even though it’s practically unheard of in mammals, this sort of regeneration is more common in other types of animals, like salamanders, echinoderms (like starfish!) and lizards. And not to contradict Rachel, but the regeneration process isn’t all that mysterious.

Let’s say a lizard with tissue regeneration traits has its tail cut off. Within hours cells gather at the injury site to generate a blastema. A blastema is a mass of cells with the ability to generate or regenerate tissue.These cells have a sort of “memory” of their tissue of origin. As the blastema forms, specific genes become activated. These form a group of genes responsible for directing the body plan in a developing embryo (namely, Hox genes), and when they’re activated in the case of regeneration, their job is the same: to guide where a specific body part should develop (so that they replace a missing tail with a new tail and not, say, a foot). As the new tail develops, new muscle tissue, nerve tissue, and blood vessels develop with it and reconnect to existing muscle tissue, nerve tissue, and blood vessels at the site of injury. And voilà! a functional, regrown replacement.

As Sarah rightly says back in season one: her daughter is not a lizard. But studies have shown that the mechanism for the spiny mouse’s tissue regeneration is probably very similar. The spiny mouse likely developed its ability as a defence mechanism, much like some lizards drop their tails to escape predators. Its skin is reportedly 20 times weaker than your average mouse’s, so it tears really easily.

Kira, like her mum, seems to be made of tougher stuff.