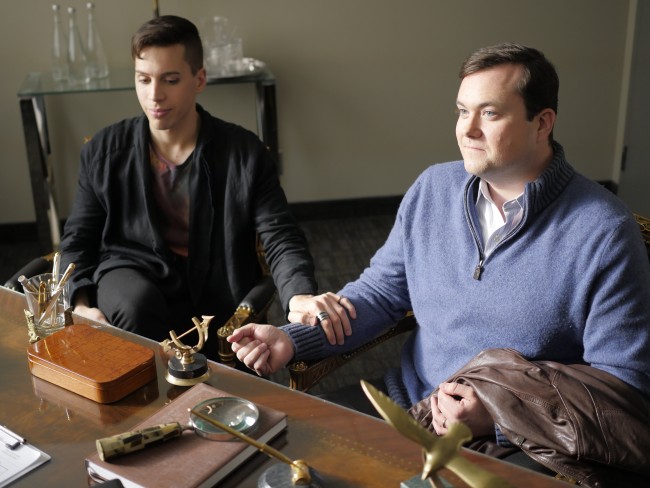 Nina: This episode clicked new puzzle pieces into place for more than one plotline. Mysterious new clone MK was finally confirmed to be Veera Suominen, the sole survivor of the Helsinki clone cull mentioned in season three and highlighted in the Orphan Black comics; Rachel took Susan’s “for the greater good” conversation to heart and decided not to treat Charlotte’s early-emerging clone disease symptoms; and everyone was getting to the bottom of Lifespring fertility clinic and what ties its “Brightborn baby package” might have to Neolution. And, of course, we are one step closer to understand the Neolution Worm’s purpose.

So, not to brag, but one of our Neolution Worm theories was correct! Called it!

Cosima and Scott successfully extracted a Worm from Aldous Leekie’s decomposing head, along with a sizeable tumor. While it’s not unusual for parasitic worms to cause tumors—the blood fluke, Schistosoma haematobium, which we discussed as a potential gene vector in our season premiere’s recap, has been strongly associated with simple-squamous carcinoma, a type of epithelial/skin cancer. To produce the tumor, the Worm would have had to alter or damage the DNA in its surrounding cheek cells to cause them to grow uncontrollably.

That said, Leekie clearly didn’t have this tumour before he died (or, at least, we couldn’t see it) and as Cosima observes “the tumor is living but the surrounding tissue is necrotic.” The Worm seems to have been supporting some of Leekie’s cells somehow in order to have a source to feed on during the months spent buried in the Hendrixes garage. Epithelial cells, even tumor cells, typically need a blood supply to survive and grow, so it’s unclear how the Worm has managed to keep the tumor cells alive.

Casey: As Cosima and Scott ominously inform us, the Neolution Worm is being used as a form of gene therapy. The worm is a vector embedded in the cheek of the Neolutionists, and it delivers foreign DNA into the cells of the host, where it gets incorporated and alters target areas of the genome. Cosima and Scott realize this is the purpose of the Neolution Worm because of the presence of fluorescence in the tumor surrounding Leekie’s Worm. Fluorescence is often used to track foreign DNA, RNA, or proteins by scientists because it is visible by eye, relatively easy to incorporate, and it doesn’t interfere with the function of the cells. In this case, the DNA within the Worm that will be delivered to the host has a sequence for a fluorescent protein attached to it. When the DNA is incorporated into the host cells and expressed, the fluorescence is also expressed, and can be seen visually within the cell. This allows for an indicator that the foreign DNA has been successfully incorporated in the genome.

As far as the Neolution Worm goes, the fluorescence provides and easy way of screening the people with implants to see if the gene therapy is working, so the Neolutionists can track the progress of their work. The fluorescence could be seen in a simple biopsy, or even detected using PCR to detect the foreign DNA.

Nina: Now the question is this: what is the purpose of the Worm’s gene therapy? If it’s to treat the clone disease, why would so many non-clones have the implant?

Casey: Maybe it’s along the lines of the “Brightborn baby package” and the gene therapy is a means of creating a greater human race. I wouldn’t think the purpose would be sinister considering Dr. Leekie himself had one. The question remains though, why does the Worm kill the host upon removal if it is a means of improving the host? And what will happen to Sarah the longer she has the Worm in her cheek?

Nina Nesseth is a professional science communicator, emerging playwright, and serial tea-drinker. She’s happiest when science-ing at people (yes, that’s “science” as a verb). You can find her on Twitter@cestmabiologie.