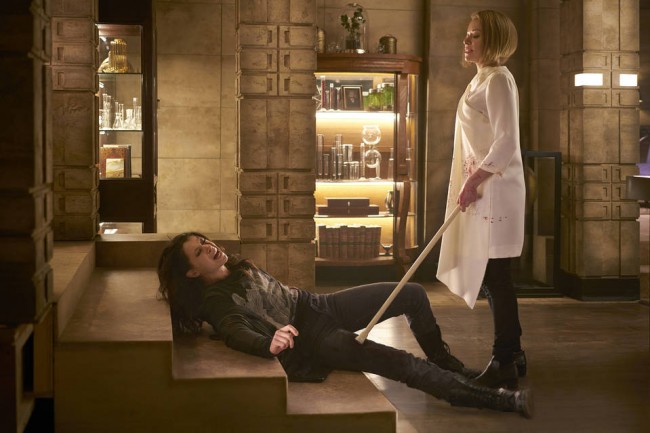 Warning: This post includes discussion of blood and violence from this episode.

Nina: We have a cure for the clone disease! I mean, Susan Duncan swiped it for her own gain and has done everything in her power to prevent Cosima’s access to it. And this episode left us, once again, with Cosima’s life hanging in the balance (and Sarah’s, and Mrs. S’s, and Kira’s…), but yes—a cure exists!

Casey: A CURE!!!! Now we know that Cosima has been working for seasons on developing a cure for the clone disease, but how exactly did she manage to finally succeed? In previous episodes we know that Cosima and Scott had isolated the sequence for the cure, but had not yet found a usable vector, and we saw Cosima and Susan initiate the generation of a stem cells from a blastocyst formed by Sarah’s egg and Ira’s sperm. These were the parts needed to create the cure.

“So what does that mean, then? That we’ve got a cure? And … and you’re gonna get well, Cosima?” (image via OBTumblr)

Once the stem cells were isolated from inside the blastocyst and grown in culture, Cosima had a working line of self-renewing cells with the combined Leda and Castor genomes. She would then need to test the vectors with the inserted gene therapy sequence on the cells. In this case, Cosima exposed the cells to the vector and looked for successful uptake of the vector into the cells, incorporation of the sequence into the cell genome, and survival of the cells after exposure to the vector.

Cosima’s tests were successful in Susan’s lab, and she managed to find a vector and sequence combination that kept the cells alive after exposure and uptake. The cells even exhibited a self-renewal rate (rate of cell division and therefore doubling rate) that indicated to Susan that the cell line could be used to continue the Leda human cloning project. Basically the moment Cosima could finally breathe easily (pun intended), she was facing the realization that dozens, perhaps hundreds of clones just like her would be generated, experimented on, and manipulated in unknown, horrific ways.

Also, there’s another thing that I really need to bring up for this episode: why does everyone keep pulling knives out of their bodies after they’ve been stabbed? Please, if a person is ever stabbed or impaled by some object and that object is still embedded in the body, do not remove it. You may have heard this advice before, and it’s good advice. Susan and Sarah both should really know better.

Have you ever tried that experiment where you fill a sandwich bag or balloon with water and then puncture it with sharpened pencils (I’m sure Rachel would appreciate this experiment)? The water doesn’t leak out because a sort of temporary seal forms around the pencil. But when you remove the pencil? Water everywhere. Impalement injuries are similar: the impaling object is dangerous because it has damaged tissue and might have damaged blood vessels, but while it is still inside the wound, it’s acting like the pencils in experiment. Once the object is removed, any damaged blood vessels will bleed unimpeded.

Sarah was stabbed in her upper leg. You know what else is in the upper leg? The femoral artery, a major artery which, if severed, would lead to rapid blood loss. Arteries deal with blood under high pressure; they have elastic and muscular walls that will constrict to try and restrict blood flow should the artery be cut. However, since the femoral artery is such a large artery, if it were severed and not treated immediately, the injured person would experience shock, fall unconscious, and die within minutes from severe blood loss.

Luckily, when Sarah pulled the knife out of her leg, there was blood, but not that much blood. It seems that her femoral artery was missed. (It’s located more toward the inner thigh than outer, thankfully).

Casey: Hopefully Sarah can hold out long enough to get to safety, just as Cosima managed to hold on long enough for Delphine to save her! Unfortunately, we have about ten months to wait until we see if Cosima really is cured and if Sarah will be okay, not to mention the fate of all of Neolution’s scientific developments now that they are in Rachel’s hands. Orphan Black’s fifth and final season is sure to be intense!

Nina: This marks the final OB science recap for season four! Thanks for nerding out with us over gene therapy and maggot-bots. Have a happy hiatus and we’ll see you next season!