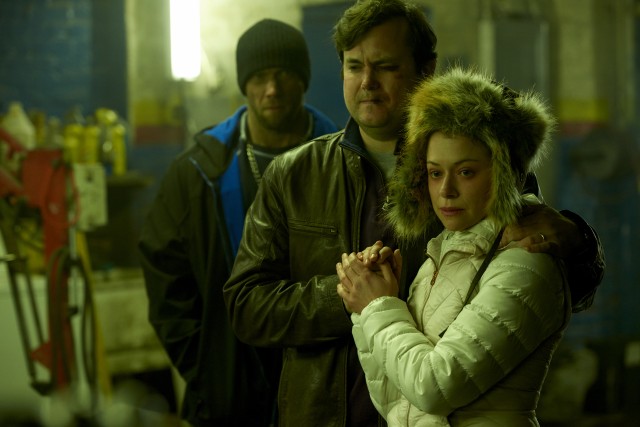 Nina: With nothing more than a nursery rhyme as their lead, this episode had Sarah, Felix and Mrs. S travel to London to track down and kill the Castor original. One song, some shady phone calls, and a handful of shadowy buildings and alleyways later and we find out that the cryptic number that Rachel decoded is a prisoner’s ID number (!) belonging to Siobhan Sadler’s mother (!!) who is the original cell line for BOTH Castor and Leda (!!!!!!!!!!!!!!!!!!!). This last piece may sound unreal, but Kendall Malone’s condition, while rare, is anything but science fiction. 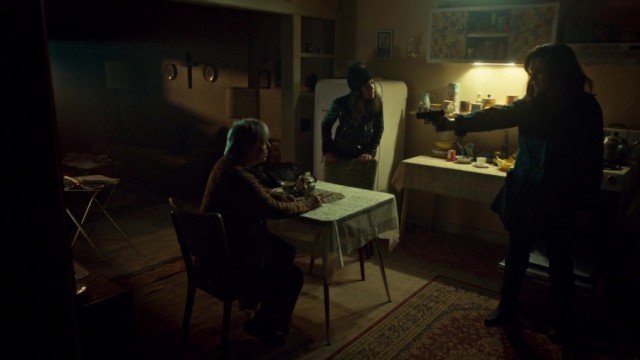 Casey: Kendall is what is known as a chimera: a person who has populations of cells derived from two independent sources. This occurs most frequently in the case of dizygotic, or fraternal, twins. The twins start off as two separate eggs fertilized by two separate sperm growing together in the womb. During development, one twin (in this case Kendall) will absorb the other twin (in this case her brother), but retain cells from the sibling. These cells may be localized to a certain area or tissue, like specific patches of skin, or parts of the liver, or they can be distributed throughout the body, creating a patchwork of genomes in the person.

If the chimerism is between two siblings of different genders, this can lead to hormone problems during growth and development, or even lead to the person being intersex, depending on which organs are affected. With Kendall, we know that her reproductive organs were not influenced by her brother’s cells, because she was able to successfully have a child – Mrs. S.

Despite the fact that Kendall is one person, her chimerism led to the ability for Duncan to create two distinct lines of clones from the two genomes found in her body. Technically, she is the Leda original, while her brother is the Castor original, but because her brother exists only as cells incorporated in Kendall’s body, she can be considered as the original for both Castor and Leda.

Nina: It’s thought that many, if not most, cases of chimerism go unidentified. Basically, unless the chimera’s second cell line forms a distinctive tissue or organ (such as in the case of intersex chimeras) or unless that second cell line causes hormonal or autoimmune problems, there would be no reason to suspect that a person might be a chimera. Otherwise, it would only become apparent with tissue sampling and DNA sequencing, as long as both cell lines are retrieved in the samples…which is exactly what happened with Kendall (my guess is that the samples were a standard blood sample and cheek swab).

Finally, let’s make at least one thing clear: it isn’t really correct to start referring to Sarah as Siobhan’s “mother.” Genetically speaking, sure, Sarah and Kendall’s Leda cell line share roughly 100% of the same material (besides what tweaks and synthetic sequences that the project introduced in Sarah) and so Sarah and Siobhan share about 50% of their DNA (similar to a parent/child relationship)—genetically it’s like having an aunt that’s an identical twin to your mother. Calling Sarah Mrs. S’s mum kinda like saying that Alison, Cosima, or any of the other Leda clones are Kira’s mother.

Need to visualize the Castor-Leda family tree? Casey made this handy-dandy chart: 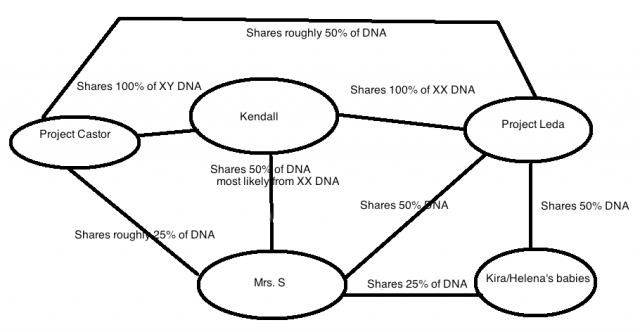 Nina Nesseth is a professional science communicator, emerging playwright, and serial tea-drinker. She’s happiest when science-ing at people (yes, that’s “science” as a verb) and watches way too many movies (but she lacks stamina and falls asleep if she tries to watch two in a row). You can find her on Twitter @cestmabiologie.