The Walk Review: Uncanny Valley Is Massive | The Mary Sue

NYFF Review: The Uncanny Valley Is Massive in Zemeckis’s The Walk 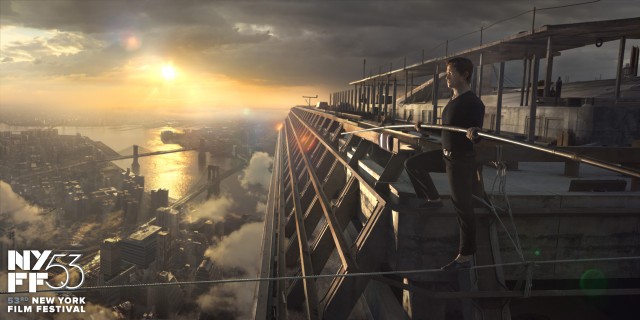 There is a scene, early in Robert Zemeckis’s latest film, The Walk, when Ben Kingsley’s mentor tells protege Philippe, played by Joseph Gordon Levitt, how to pay respect to an audience. It isn’t about giving a big, dramatic bow or overblown statement; it’s about knowing how to be subtle enough to allow your true emotions towards them to come out sincerely.

This might be the defining scene of Robert Zemekis’s career, because he clearly he knows what a lot of audiences and critics have grown kind of tired of from him; the exaggerated, manipulative, false emotional beats in his movies that are more frustrating than they are moving. He just told the audience he knows that’s a problem. AND YET … He did the same thing AGAIN in The Walk! He literally wrote at the beginning of his movie the biggest problem with The Walk: the fact that you can feel the hand of Zemeckis constantly trying to forcibly get the response he wants, rather than letting you get there on your own.

I was pretty excited about The Walk for one big reason: I LOVE heist films. And just the way Man on Wire was done almost like a caper, approaching The Walk like a polished heist is a great concept for a film. Both films focus on breaking into the World Trade Center so a high wire artist named Philippe Petit could walk across the void of the two towers on a wire. Doing it within this genre should allow for an affective retelling that recreates the walk and shows the formation of Petit’s crew.

After all, a really good heist movie is all about the personnel, planning, and execution of the crime. And I will say, the moments when the movie plays like a heist is when the film is its most entertaining and engaging. They are often funny, thrilling scenes and show the details required to get this done, but it takes a good 40 minutes before the heist really starts. Rather than end with the conclusion of the walk as fulfilling their task, Zemeckis tags another 5 to 10 minutes on in order to preach the social importance of Petit’s walk, ruining any of the goodwill the film had just earned in its better second half.

So how does it start? Well, it’s a true story with awards potential, so it starts with the origin story, of course: childhood moments when Petit learned to work on the rope. These very Zemeckis-y moments feel forcibly sentimental, manipulative, and unnecessary from the too-soft lighting to the almost cartoonish production design and uninspired inspirational music, and the entire thing starts out feeling too slow. The movie’s premise and actual story we end with feels like something that should pop with energy in everything from the score to the cinematography, the design, and the editing.

The movie eventually finds that pumped up energy, but the time it takes to get there really threw me off—almost as if you could walk into this movie 40 minutes late and have a more enjoyable time than if you arrived on time. This is heightened by the fact that all the background stuff about his life, and why he walks across the wire, was handled so beautifully and emotionally in the retelling done in Man on Wire, a documentary whose positive memory with the audience might be a disservice to this movie, rather than a marketing asset.

It also does itself no favors by starting with Joseph Gordon-Levitt as Philippe, standing on top of the Statue of Liberty with a New York backdrop that includes the Trade Center Towers. I understand why you would want to have your narrator on-screen, but this unbelievably weird approach is just off-putting. For one, everyone laughed whenever Levitt was in these sequences, because the shot looked so strangely green-screened and airbrushed. Second, while I know the real Philippe had a pretty unusual Parisian accent, showing Levitt doing his impression in close up really calls attention to the performative nature of his work in this film, so it pulls you out of the story and instead reminds you that he’s ACTING.

And third and most importantly, the visual with narration cuts the tension about the story he’s retelling because his physical presence reminds us constantly, “I’m okay; nothing bad happened to me.”

Levitt is fine in the role and finds a nice balance between playing a character and doing an impression, although I found any convincing or seduction of his crew to be pretty superficial (most of this due to the script, rather than Levitt). People join Philippe for adventure and to be part of something “important,” but we never really see what it was about him that got people to work with him specifically. He usually just seems like a selfish, obsessive jerk who can be pretty unlikable to the few people who can stand to be around him.

Unfortunately, most of the cast playing members of the crew are treated pretty badly. Despite lots of good character actors (James Badge Dale, Ben Schwartz, Steve Valentine, Clement Sibony) doing their best to bring their roles to life, the film isn’t interested in them enough to make them stand out and feel distinct within the crew or even play up the tension between the French participants and New Yorkers. I felt especially bad for Charlotte Le Bon, who is called one of Philippe’s accomplices and happens to be his girlfriend, but is turned into the den mother when the heist is really happening (by the way, she’s the only woman with more than two lines in the movie). Ben Kingsley is still a great actor, and is good in this movie, but feels underused. I should also say that every single actor playing a cop in this movie is like something out of a cartoon.

But understandably, this movie’s appeal is going to primarily be the effects and visuals, which is an understandable reason to pay to see a movie, to be fair—especially if they really suck you into the experience and story—and I can completely acknowledge that there are moments when the movie looks great (especially the primary architecture of the World Trade Center recreated). A lot of people have also apparently had physical reactions to the 3D, getting a sense of vertigo and disorientation, which is pretty impressive (not that I want anyone to get sick during a movie).

Honestly, and I might just have a vision problem when it comes to 3D, but the movie felt very flat during my screening, and I never felt the depth and heights intended, which is strange, because some of the stills from the movie managed to create the effect more than the actual footage. But even so, for people who did get the effect intended, the 15-or-so-minute walk still managed to start to feel repetitive, and that awe eventually left the room to be replaced by the movie’s overwhelming cartoonish “cheese” factor. Oh, and there is one of the worst digitally animated birds in this movie that I’ve ever seen that made a friend and I both ask ourselves, “Why couldn’t they have just used footage of a real bird?”

The line between what feels real in this movie and what feels false is probably what I left the theater feeling worst about. I know there is a lot of hard work put into this film to try to create something and make it feel as real as possible, but it just never did. I never felt sucked in by the story or characters, who, even if based on real people, don’t feel like real people. And that feeling of excitement, energy, or nervousness the effects tried to evoke (and I wanted to feel) is absent. It’s impressive that they could reach what they did in this movie, but admiration for tech isn’t reason enough to recommend audiences see a movie, especially in expensive IMAX 3D.

I can’t recommend people spend $20-$25 on a movie like this, even for the better second half. But like Avatar, without the 3D effects, it probably isn’t worth spending the money on standard 2D, either—especially when we have a much better movies worth the price coming out in theaters this same week.