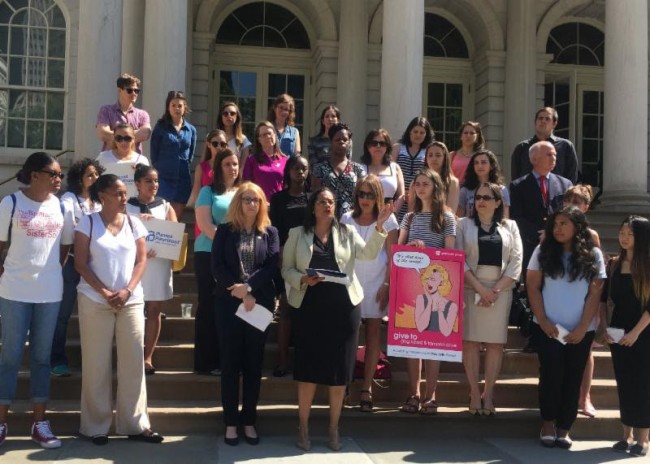 One law will reach approximately 800 public schools and 300,00 students. Another will supply millions  of tampons and napkins to youth, domestic violence, community development, single adult women, and family shelters. A third requires the Department of Correction to provide inmates with sufficient pads and tampons “immediately upon their request.” Mayor DeBlasio is expected to sign it into law within the month.

Council Members Laurie Cumbo and Helen Rosenthan, co-chairs of the Women’s Caucus of the New York City Council pointed out that the cost of feminine hygiene products can be as high as $100 annually and with nearly “30 percent of teens” living in poverty in NYC, the city speaks the message that “feminine hygiene products are not luxuries, they are necessities.” Steven Levin, Chair of the General Welfare Committee adds that “accessibility in shelters is equally critical to the availability of basic necessities such as shampoo and toothpaste.”

Ferreras-Copeland, who’s been pushing for this legislation spoke about how the change will not only impact day-to-day convenience, but also fight against period-shaming:

They allow women and girls, whether in school or in the board room, to participate fully in their daily activities and avoid health risks. Providing menstrual hygiene products privately, immediately and for free is also about sending a body-positive message by not perpetuating shame and humiliation, and acknowledging that women’s bodies, even those of women serving time in prison, deserve some dignity during their periods.

Council Speaker Melissa Mark-Viverito, CEO of Planned Parenthood in NYC Joan Malin, and founder of Free the Tampons Nancy Kramer were also among the many voices applauding the legislation as a landmark decision. Kramer said she hopes it will “lead to policy for our country and then around the world.” Here’s hoping!