Sexual Harassment Is A Common Problem In The Scientific Community, Says This Study

"UGH" is a statistically likely response to this news. 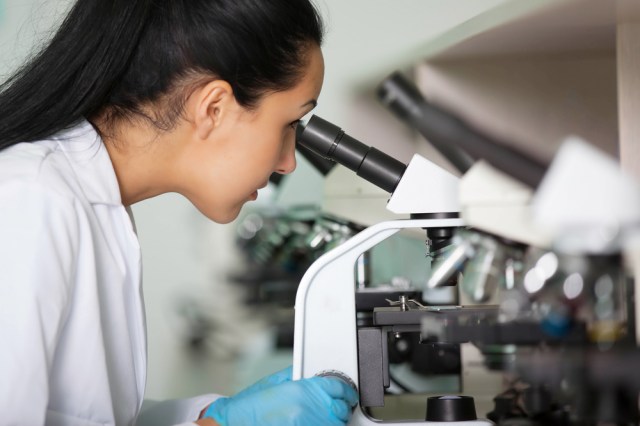 Everyone’s heard their fair share of annoying arguments as to why certain fields of study like science and technology are more male-dominated; often people claim that women just aren’t trying as hard as men to succeed in their careers, or that they aren’t naturally as interested in certain subjects as men are. Or, maybe, it could be that there’s little to no support for women who need to report hostile work environments, which ends up turning them away. You think it might be that one? I think it’s that one.

According to a paper recently published in PLOS One, more than 600 male- and female-identifying scientists in various fields (anthropology, archaeology, biology, zoology, and others) were recently asked to anonymously complete a survey about their experiences with sexual harassment in the workplace. The survey contained questions such as the below:

1) ‘‘Have you ever personally experienced inappropriate or sexual remarks, comments about physical beauty, cognitive sex differences, or other jokes, at a field site? (If you have had more than one experience, the most notable to you).’’

2) ‘‘Have you ever experienced physical sexual harassment, unwanted sexual contact, or sexual contact in which you could not or did not give consent or felt it would be unsafe to fight back or not give your consent at a field site? (If you have had more than one experience, the most notable to you).’’

Their findings indicate that of the women who responded, 71 percent reported having faced some kind of inappropriate sexual comment in the field, most frequently while they were trainees. 26 percent also said they had experienced sexual assault.

As you can see in the above chart, 41% men also reported facing inappropriate comments, and 6% reported assault as well.

Exacerbating the problem is where the remarks are coming from; the below charts suggest that while most of the inappropriate comments and unwanted reported by men came from their peers in the field, a whopping majority of those same reports from women were instigated by their superiors. 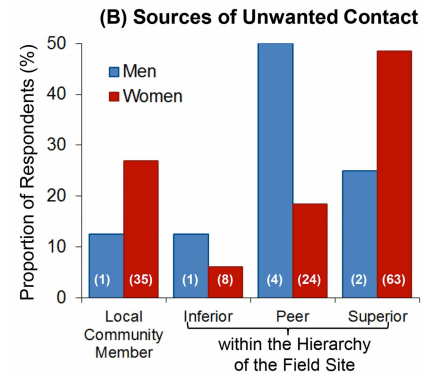 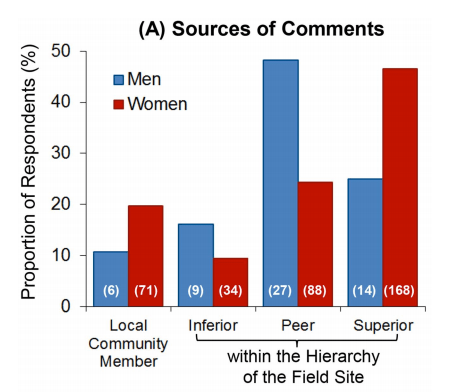 “Other workplace aggression research suggests that abuses where the perpetrator is superior in rank creates more psychological harm for the victim,” paper co-author Kathryn Clancy  told The Verge. “It’s like a double whammy for the female trainees disproportionately affected by harassment and assault.”

The study goes on to suggest that many labs don’t make an effort to inform trainees and other employees of their sexual harassment policies, if they have one at all.  Of those scientists who responded to the survey, only 38% reported knowing of any code of conduct at their field site; a mere 22% were aware of any sexual harassment policy, and only 20% actually knew how to officially report a transgression. Oddly, men were also statistically more likely to know about their field sites’ harassment policies than women were (30% vs. 20%).

We should note that this was not a random survey and that most of the participants were referred via e-mail and social networks, so we can’t point to these numbers and say definitively that 71% of all female scientists everywhere have been harassed. But when you factor in a similar and recent study that suggests male scientists are significantly less likely to bring female trainees into their lab—particularly when these men are stationed in elite research facilities or have won some kind of award—it stands to reason that there are many complex factors keeping women away from promising scientific careers, rather than just not being as interested or as good enough.

Hopefully taking steps to systematically change the culture of the scientific community at large will result in a more equal and less hostile environment for all scientists. One good place to start? Ensuring that employees and trainees regardless of gender are made fully aware of their labs’ harassment policies, and that they are given safe and straightforward methods of reporting unwanted comments and behavior that exist outside of their immediate superiors.

(via The Verge, Slate, PLOS One, featured image copyright foto infot via Shutterstock)