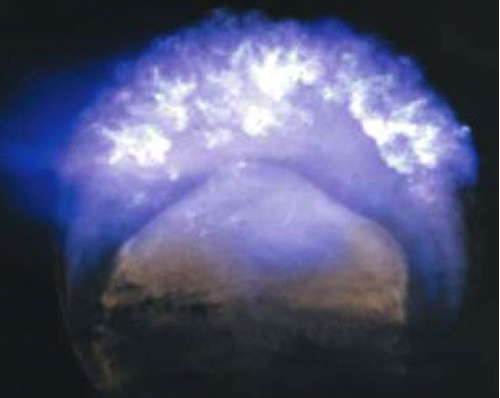 How’s this for one-upping a fireworks show? In July 1962, the U.S. government set off a hydrogen bomb … in outer space. Filmmaker Peter Kuran, who made the documentary Nukes in Space, collected these recently declassified images.

According to science historian James Fleming of Colby College, space scientist James Van Allen had agreed with the military to detonate a nuclear rock 250 miles above the Pacific Ocean, to test the following:

Well, as it turned out, though the initial atomic bomb tests had little effect on the magnetosphere, the hydrogen bomb code-named “Starfish Prime” set off on July 9 produced an artificial extension of the Van Allen belts visible across the Pacific Ocean. Reportedly, blackouts and eerie electrical malfunctions, like garage doors opening and closing on their own, occurred after the blast.

I’m surprised this isn’t more common knowledge (or I could just be ignorant). Just a guess, though: These tests were probably somewhat of a contributor to the gaping hole in our Earth’s atmosphere.

NPR has a video here: