New Report Says the NSA Poses as Facebook to Spread Their Malware, Good Thing We’ve All Moved on to Twitter

When searching for terrorists, leave no picture of a baby or pet unchecked. 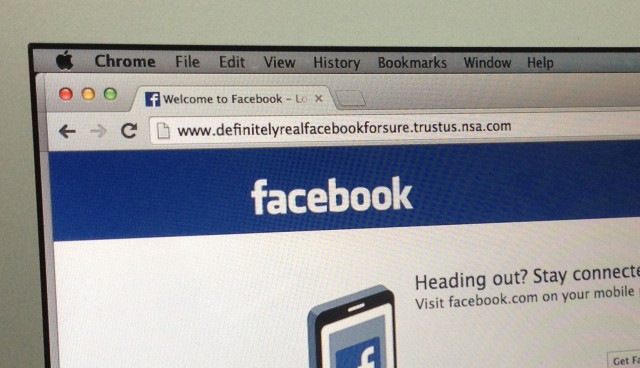 Oh my God, the NSA is posing as Facebook to spread malware and steal all of your data! Can you even belie—no, I can’t do it. I just cannot be surprised at the depths of this whole NSA spying debacle anymore. I don’t have anything left. If they mounted a camera to my skull that observed my face at all times, all they’d see is a complete lack of shock. When it comes to Internet spying, I’m pretty much dead inside.

However, despite the fact that we already know about the NSA’s spying, ability to record your inane conversations through your computer’s microphone, and harvesting of your data with malware, the rabbit hole just seems to keep going deeper. In a new report from Ryan Gallagher and Glenn Greenwald (which is absolutely worth reading, you who are currently using the Internet), the reporters detail just how the NSA goes about spreading its malware around the world, and it brings new information in the fact that they actually pose as a Facebook server to get the job done.

I hope posting all those selfies was worth it. The report states:

In some cases the NSA has masqueraded as a fake Facebook server, using the social media site as a launching pad to infect a target’s computer and exfiltrate files from a hard drive. In others, it has sent out spam emails laced with the malware, which can be tailored to covertly record audio from a computer’s microphone and take snapshots with its webcam.

I mean, monitoring communications made over electronic infrastructure that you don’t personally own is one thing. My mother always taught me not to write anything down that I wouldn’t want printed in the newspaper, so I’d be inclined to blame myself if something I willingly transmitted over the Internet was commandeered and seen by someone else.

However, using the same tactics as malicious hackers in spam emails and impersonating friendly websites to install malware and mine data that isn’t even being willfully shared online is a pretty low blow.

Congratulations, NSA. I may have reached saturation as far as being surprised, but your ability to consistently disregard common sense as to what is an acceptably defensible covert surveillance practice is impressively disappointing.

Now I guess we just wait for next week’s report that secret NSA ninjas are hiding in our walls and floors. Hey, maybe they’re the ones who keep stealing my left socks.

(The Intercept via Gizmodo, image my own)