All of Us Are Out Here Endlessly Buying New Notebooks 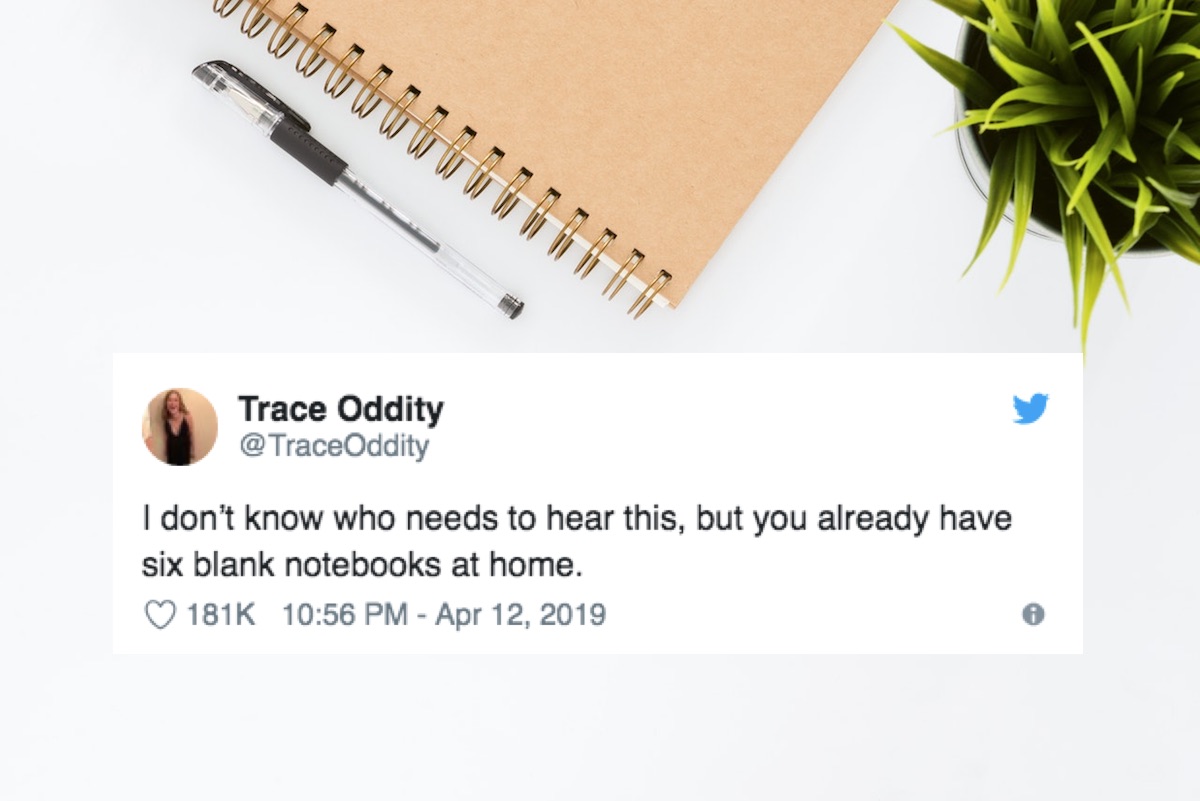 A few days ago, a Tweet went by that made me smile: “I don’t know who needs to hear this, but you already have six blank notebooks at home,” Twitter user @TraceOddity wrote. Actually, that smile was more of a grimace, because six notebooks? Try thirty-six. I am a repository of mostly-unused notebooks. And apparently, I’m far from alone.

The Tweet struck a chord, garnering a staggering 181k “likes,” 41k retweets, and thousands of replies. I think I’m a little surprised by this result because I’m a collector by nature, so I rather thought this bottomless notebook hoarding was just another thing I did.

I know a lot of writers, and writers love a good notebook, but I assumed that they were getting more mileage out of them. Yet as soon as the Tweet was dropped in our Mary Sue chat, every staff member said that they felt called out.

save the subtweets and @ me next time ok? pic.twitter.com/jG5DoDTJgV

I don’t think there’s any one reason why we’re apparently buying more and more notebooks while we have untouched notebooks languishing at home. I certainly don’t think you have to be a writer or an artist to have this affliction. Anyone bent on tackling any sort of project may understand the temporary hope a fresh notebook offers. As far as indulgences go, it feels manageable, a self-selected present that will surely result in increased productivity.

“This time, I’ll use it, and really do [insert project],” you think to yourself, as though this matte cover with the dinosaurs on it has better energy to receive your input than the one with cats or classical art.

Other considerations abound, and contribute to additional purchases: the size of the book, the cover (hard or soft?), the paper quality, the paper ruling (lined or unlined? College-ruled or wide?), what pens will pair best with it. I can’t go on a trip without the perfect-sized travel notebook for whatever bag I’m taking, can I? How can I attend this press event without a notebook of the right consistency and professional appearance? Oh, you’re offering free branded notebooks at your event? Don’t mind if I take one or three.

Only six? Clearly it isn’t me

I can’t speak for others, but I know I’ve been like this for a long time. When I was 12, a “psychic” at a country fair told me to go home, gather up all of my assorted notebooks, and try to consolidate my ideas. I always thought she was incredibly intuitive, but in retrospect I probably told her that I was a writer and she was aware of this all-too-common condition. It’s only worsened with age and a paycheck. I have actual entire bookshelves full of nothing but mostly unmarked notebooks. For every notebook I’ve filled, its many empty brothers are nearby, crying out for ink. But even with an increased awareness of Notebook-Buying Syndrome, I can’t tell you that I’m liable to stop.

I know that I’ll discover notebooks in far-flung locales I simply must have, because how will I ever encounter them again? I know that I’ll be gifted more notebooks, because what safer bet is there for a writer? And I know I’ll have a project or the desire to be inspired to one, and surely this time—surely—this new notebook will do the trick.

Let’s take a look at a few of the Twitter replies that hit just a bit too close to home.

I will not stand for these attacks against my person! pic.twitter.com/XVfgK5rcm7

In which I am further attacked:

They are not BLANK. They each have 2-4 pages messed up.

Exactly. The whole point is to buy a new one for a new project only to end up needing to consolidating into 1. But you can’t throw the old 1 out for that random phone number you wrote down.

But what if this is the notebook that fills the yawning void in my soul? pic.twitter.com/c09fW2fkZl

How did you get inside my apartment to take a picture?

Six is for amateurs. pic.twitter.com/aK6XDf4JvX

At least we’re prepared for a dire future:

One day, when we complete the transition to a paperless society, Staples will sell its last notebook, and on that day, we who have routinely bought blank notebooks with no regard for our current stash will be sitting on RICHES.

And of course, the counterargument we can all understand:

Yes but on the other hand look at this cool notebook I got on clearance at Target pic.twitter.com/NQUGqu24sU

Is this you? How many notebooks are you sitting on at currently? I’m afraid to go count. The answer is “a lot.”

I don’t know who needs to hear this, but you already have six blank notebooks at home.