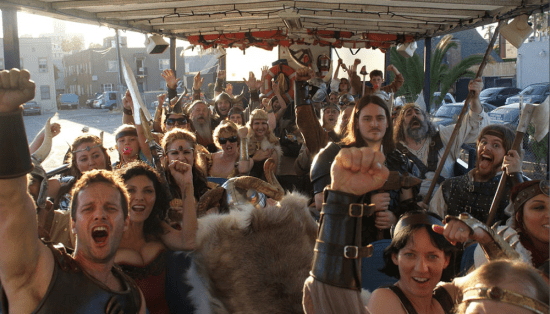 The Norse Hollywood Dining Vikings (Facebook page here, natch) have made a pasttime of dressing up like vikings and carousing their way over to wherever vikings shouldn’t be. Like… a laser lights show, the Red Bull Flugtag Races, a chain of gay bars, or IKEA (although Jonathan Coulton would probably disagree).

The group started with professional blacksmith and prop-maker, “occasional viking,” and “the reigning ‘Pirate of the Year’ for Pirates Magazine,” Tony Swatton; who told AOL News:

“At some point, [a friend] and I decided it would be fun to dress up like vikings and go to restaurants and do reviews,” Swatton said. “The next night, we went to Griffith Park Observatory where they were doing a laser show about the northern lights. There were 15 of us and we all had our weapons — axes, spears, everything — and we heckled everything.”

Swatton notes that in order to visit the Flugtag races, they traveled by subway, but that they made sure to send their weapons by car; and that it is indeed difficult for the group to go anywhere without someone shouting “What’s in your wallet?”

Their next planned event?  Octoberfest.

“We will bring 100 vikings for what we like to call extreme dining!” [Swatton] said. “We will be storming the fest in search of food and we will have a viking birthday for a member called William the Elder who is turning 75. His cake will be in the form of a Viking Longship with chocolate shields and dragon figurehead.”

…and in the name of chocolate cake.  We highly recommend you read the whole article, which is full of gems, right here.