Free books, to free your mind. 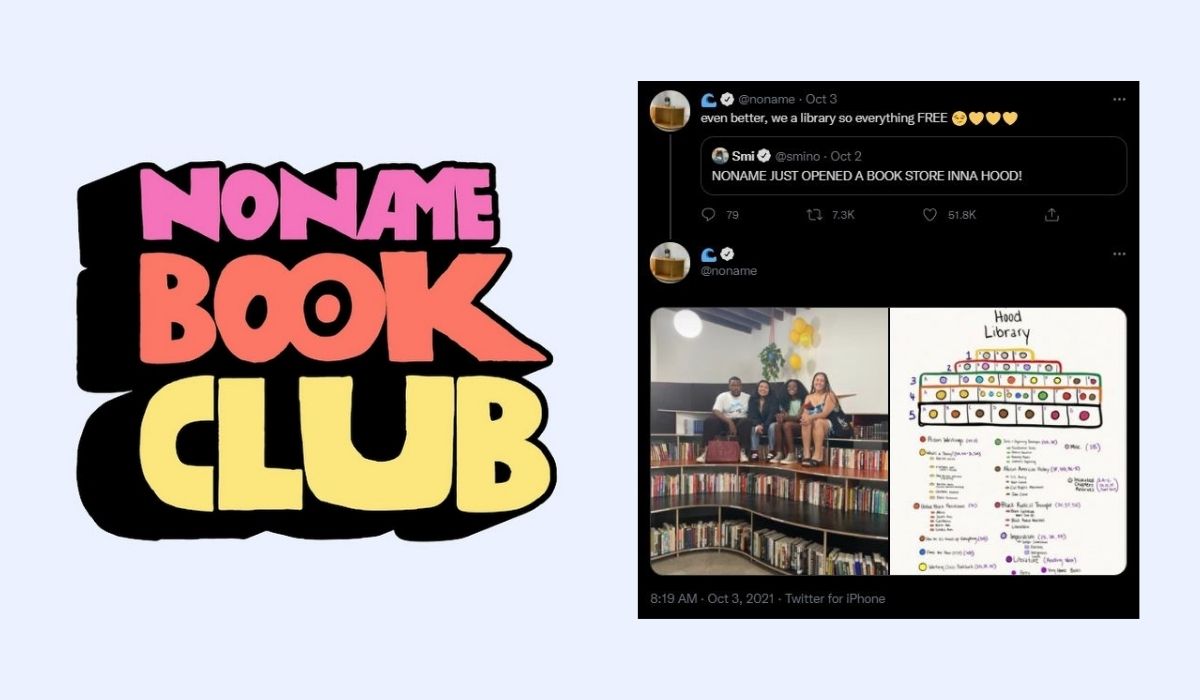 When Noname began her book club in the summer of 2019, the endeavor started as an in-person and online way to reach others by reading books by people of color, with a focus on liberation. Twelve national chapters and a wave of support later, the book club has physical headquarters.

We are so excited to finally open our Radical Hood Library! This is a black led organization that was created to service black/brown folks and the RSVP prioritization will reflect that 🤍

There will be music, free food, and more! Please bring a new or used book. See you there!!! pic.twitter.com/UYviQfSAww

our library is completely free to our local community. consider donating for $1/month to help us stay open 🙏🏾https://t.co/AfAJhAUSSc

my favorite sections of the library…

This book club didn’t just start from an idea via Twitter convos that turned into some meetings and then a library. The transformative seed started, as it does for many readers and artists, from exposure to books and encouragement of the imagination from childhood.

Back in 2019, when Noname began the book club, she spoke to Trevor Noah on The Daily Show about her intimate history with community book spaces. Her mother opened an independent bookstore in the ’90s, and she became further exposed to the importance of reading and community through that experience.

She also brought up the inherent rebellion of opening a book space that is focused in reading material for Black liberation. Noname does this by citing the FBI operation COINTELPRO. Of the many ’60s-era surveillance program’s targets (such as the Anti-War, Civil Rights, Black Power, and other movements) were Black libraries. Fifty-three years ago this week, the department sent a one-page memo announcing an increased focus on Black bookstores and their owners.

.@noname started a bookclub that features local POC-owned booksellers as a f*ck you to Amazon and the FBI.

In addition to the discussions online and in-person, the book club is also focused on access to materials. They promote Black-owned bookstores and library usage. Last year, they also partnered with seven cities across the U.S. to ensure that the book club picks are in the collections of their branches. This comprises almost 200 branches between the seven cities.

The services offered by the Noname Book Club go beyond group discussions and reading. In 2020, the book club expanded its operations with the Prison Program to send books to those incarcerated. In April, they were sending 44 books per month, but now, that number is over 600. Speaking of, Noname stated that even if the library (in the way they imagined) didn’t work out, the space would serve as shipping, packing space for these books sent to prisons.

This opening (like everything Noname does) garnered unfair criticism. Some pointed out that she is engaging with capitalism by renting the space the library is held in and that she should’ve hosted it in Chicago (where she started her career). Since she’s lived in L.A. for the last few years, it makes no sense for her to run a physical location across the country. Also, to the capitalism bit, people are saying this while tweeting from a device that they bought and on a privately owned platform selling user-data to companies that will turn around and sell you things. So, that complaint is likely just a way to tear the organizers down rather than be constructive.

While publicly funded spaces like traditional libraries, etc., are so vital, I love to see these community-made and run spaces. This book club, like others (The Smart Brown Girl Book Club), gives regular people not only the space to discuss difficult topics, but to be equipped with community knowledge without going into debt from going to college. College is invaluable, but still not accessible, whereas programs like these center on accessibility.