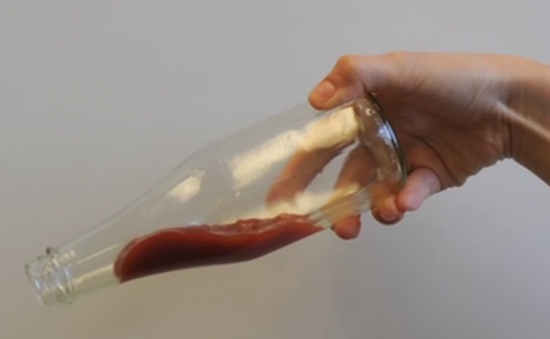 If you haven’t had at least one experience with swearing at a ketchup bottle that just refuses to give up the crimson deliciousness held within, you aren’t a real person. At least not as far as I’m concerned. As for all you real people, those of you who have done battle with a counterproductively viscous condiment, your troubles may soon come to an end. MIT PhD candidate Dave Smith and his crew have developed a super non-stick coating that could completely eliminate bottle-clinging remnants, and seriously reduce your stress level.

The miracle is something called LiquiGlide, a “structured liquid” that is rigid like a solid but still provides a useful liquid-like lubrication. Before we go any further though, you really need to see what this looks like in action.

Crazy, right? Still, as amazing as it is, this seems kind of like a trivial pursit for a team of MIT scientists. That’s in part because it was never ultimately intended for this use. The spray — LiquiGlide is applied with a spray —  was originally intended to be used for industrial sorts of things like use in gas lines, maybe even on vehicle windshields. It may still be used for those things, but as it turns out, getting the tech ready for bottle use is easy enough to push out ahead of other applications since all it requires is a quick in-bottle spray session; the spray was designed with only FDA approved substances, so it should be on the fast track in that regard.

Helping ketchup out of the bottle isn’t just a convenience thing either. If this spray was uniformly applied to bottles of all sorts, it could drastically cut down on food waste and save on the order of tens of billions of dollars. Recently, LiquiGlide took the gold in MIT’s Entrepreneurship Competition, but it still has a long way to go until implementation. While the creators of LiquiGlide gave it a name, they’ve yet to form a company to sell it, or sell that company. Nonetheless, they’re in talks with several bottle companies. Let’s hope those work, for the sake of condiment users everywhere.

Give it one more look, this time with mayo.