What Does Ylvis’ “The Fox” Have in Common with “Deck the Halls?” Non-Lexical Vocables. Here’s What That Means 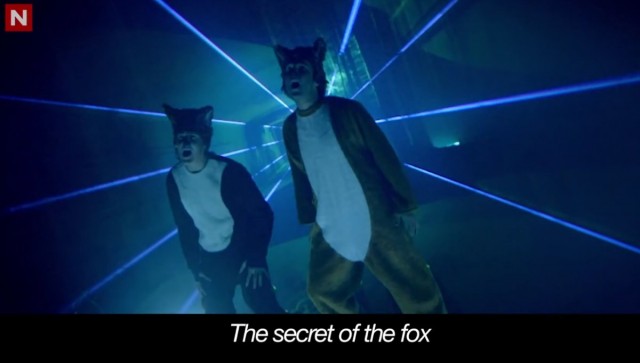 As evidenced by “The Fox”, the answer to the question “What does the fox say?” is a lot of unintelligible gibberish. That gibberish is called Non-Lexical Vocables. Basically, sounds we make with our mouths that aren’t words. Things like “fa la la” and “na na na” are non-lexical vocables, but why do we use them and not other sounds?

There’s no clear origin for non-lexical vocables, because they predate recorded history. Humans probably made these sounds before we developed the capacity for language. McCulloch compares it to how babies will make repetitive babbling noises as they’re first learning to speak. (We can confirm this behavior in at least one baby first hand.)

Typically, non-lexical vocables are simple sounds to make and follow a pattern that’s often repetitive. They are common in many languages and appear in the music of a number of cultures. This could be because they’re easy to sing. Think of the theme song from Doug. Now stop thinking about it. We bet you can’t. It’s in there pretty good, isn’t it. Sorry.

Come to think of it, Skeeter communicates in non-lexical vocables quite a bit, though his signature honks are a bit more complicated than your average human is willing to make out loud. Perhaps Beaker the Muppet is a better example.

The non-lexical vocables that we use tend to make stronger use of vowel sounds than consonants. That’s probably because, when singing, it helps to use sounds you can stretch rather than something like a hard “T” that’s more percussive. In the podcast, McCulloch uses beatboxing as an example of what happens when you try to use hard consonant sounds, and she even links to our guide on how to make Google Translate beatbox. (Thanks!)

You can listen to the full episode over on the Grammar Girl site, which we really think you should be subscribed to anyway. Also, be sure to check out McCulloch’s other posts on her fascinating All Things Linguistic blog. Good luck getting the theme from Doug out of your head.

(via Grammar Girl, image via Ylvis)