I just wanna sit in an odd position in peace, IKEA, damn! 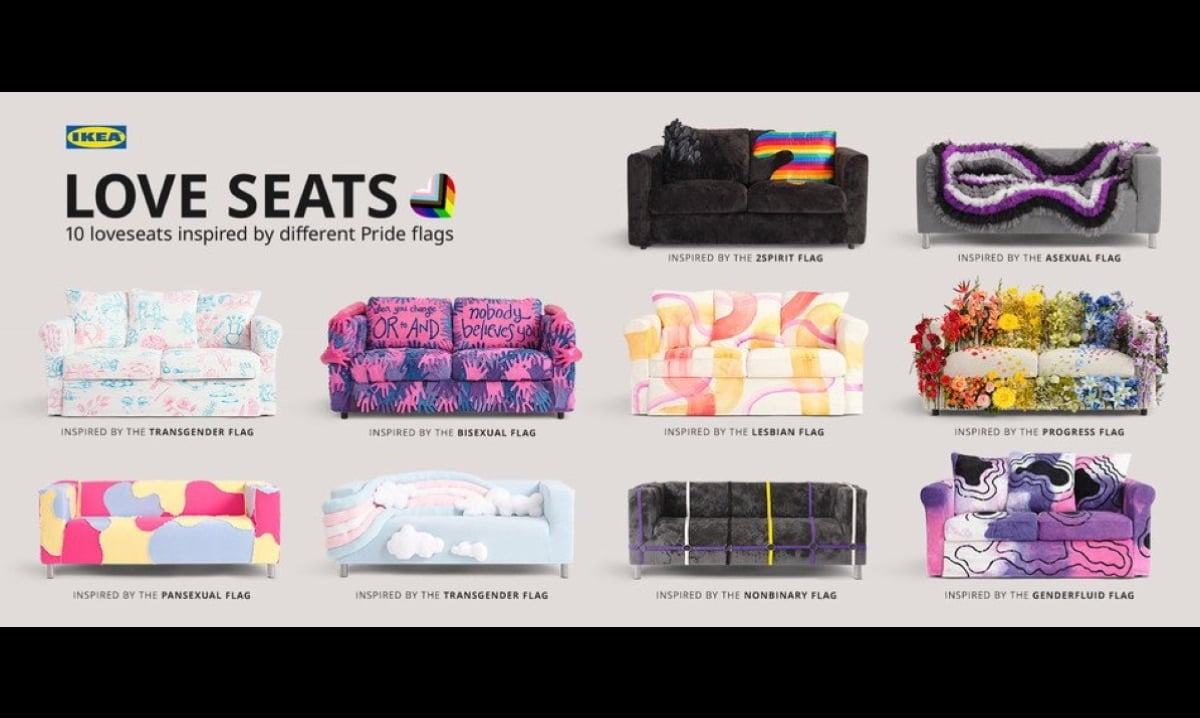 UPDATE: A previous version of this article named Brian Lanigan as the designer of the bisexual couch. The designer is actually Charlotte Carbone with Brian being the inspiration behind the design.

With Pride Month comes the understanding of there being a wave of merchandise released that’s full of rainbows, plenty of PRIDE, and Nickelodeon GAK hands reminding you of the bisexual struggle.

The Ikea pride collection is so insanely cool??? pic.twitter.com/yNfbcvrfjx

A few things before I legitimately try and make room for that adorable transgender cloud couch in my office because it is REALLY cute. First and foremost, when I think of companies trying to get my pink, purple, and blue dollars, I expect T-shirts and multicolored snacks (or plain white snacks if you’re Skittles). Never in my mind did I think someone would run an entire furniture campaign designed around the colors of different queer flags.

According to IKEA’s website, “There’s more to Pride than a rainbow. That’s why we created Love Seats – a collection of IKEA loveseats inspired by the Pride flags of different 2SLGBTQ+ identities. Designed and created by artists active in the 2SLGBTQ+ community, the loveseats are a platform to celebrate identity and share stories of love.”

I think it’s neat that IKEA worked with queer people to create these loveseats and the website shares everyone’s stories via text or video. That being said, I (and Twitter) couldn’t help but notice one particular design.

I dare you to think of anything funnier you could put on a bi themed couch than “nobody believes you” https://t.co/F5Q595Tsbu

everyone is talking about how “nobody believes you” is written on the bi ikea couch but can we talk about how its COVERED IN FUCKING HANDS?????????? pic.twitter.com/dYgUAsJU8w

Dressing up as the NOBODY BELIEVES YOU bisexual couch for Halloween pic.twitter.com/oDsoO3uEJF

My initial question when seeing the couch was wondering why it was the only one that had a message written on it at all—and why it had to be one that spoke directly to my “don’t forget the and” aesthetic as a disaster bi. Then again, if I were to make “on the nose” bisexual pillows I’d make it so you could only see the lettering in the dark, because we’re invisible to everyone in the light of day.

As for the hands, well, I said a silent prayer to my cats who would most definitely try and figure out how to lay on the arms of the loveseat.

What are those hands made out of?

Are they resistant to cat claws?

To be fair, the one who inspired the look of the couch came out to explain the meaning behind it and is even aware of it being a “Don’t Dead Open Inside” moment because of the pillows. “Don’t Dead Open Inside” refers to sign campaigns that line up the words in a way that can easily be misread. Currently, we’re in the age of SASA LELE because of two sale signs that lined up in a way that, when read across, reads Sasa Lele.

Hey everyone, I’d love to explain the NOBODY BELIEVES YOU love seat! The line “when you change ‘or’ to ‘and’, nobody believes you” is from a poem I wrote in high school about bisexual erasure I experienced from an ex-partner and others.

Brian Lanigan’s story is what inspired the look of the couch with designer, Charlotte Carbone, bringing it to life. Brian goes on to say, “I’m a spoken word poet and the hands are meant to represent the audience reaction, especially those of other bisexual folks who would approach me after performances and share their story with me,” before including a link to the poem in question.

I’d like to think that Brian is looking at that 2015 video and saying, “Damn. It’s a whole ass couch now.”

Honestly, the entire collection is a range of “wow that’s actually cute I would buy that” to “this is one of those red carpet events where someone shows up in actual, handpicked flowers, and they hired beekeepers to release a couple of bees to create the perfect ambiance.” There really is no in-between, here.

I kinda love it. I’m bisexual, I might as well have eye-catching furniture to go along with my inability to sit properly.

I’ve already shared my thoughts on the bisexual loveseat, it’s only fair that I delve into the rest!

Happy Pride, everyone! I’m gonna try and talk my wife into a new blue, pink, and white fluffy cloud couch!