Let’s Stop Waiting for Our Hogwarts Letters: Why You Don’t Need to Be the “Chosen One” to Be Magical 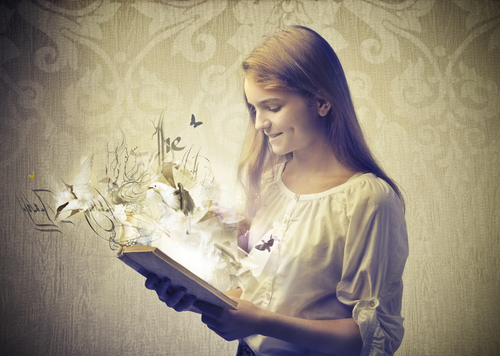 I never got my Hogwarts letter. (It was entrusted to Errol to deliver, I’m sure, and he must have gotten lost.) Giles never showed up at my library to say I was the one girl chosen in all the world to stop the spread of evil. And Merriman Lyon did not visit on my eleventh birthday to tell me I’m one of the Old Ones and must seek the Signs because the Dark is rising.

When I was a kid, I used to add “magic wand” to my birthday wish list every year. (I would have settled for a charmed amulet or even a mildly enchanted paperclip.) I routinely checked the back of my closet for the entrance to Narnia. And I was always on the look-out for a stray dragon’s egg in the woods behind my house that would hatch a friendly, telepathic, teleporting dragon, because they were oh-so-common in central Massachusetts. I wanted magic! I wanted to be the secret unicorn princess with the special power to save the world that suddenly blossomed on my whatever birthday, granting me strength, wisdom, and bravery in abundance.

But it didn’t happen, though all of the above may explain why I write fantasy for a living.

I’m the author of 11 fantasy novels for adults, teens, and kids. My newest book is The Queen of Blood, the first in a new epic fantasy series from Harper Voyager called The Queens of Renthia. It’s about a world filled with nature spirits. But these aren’t your sweet, frolicking pastoral sprites…these spirits want to kill all humans, and only certain women—queens—have the power to control them.

My main character, Daleina, isn’t a Chosen One. She isn’t destined to be a hero. There are no prophecies about her, no shuddering of the world when she was born, no magical whatever gifted to her. She’s a mediocre student with a modicum of power but no secret or latent talents. Her only true “magic” is her determination. She wants to protect her family and save her world, and she’s willing to work hard to do it.

I wanted to write about an ordinary person who wants to do extraordinary things.

I chose this because I believe there’s magic in the mundane. I think the most Muggle of Muggles carries wonders in his or her heart, and that we are all capable of more than we know.

Right now, I’m rewatching the Lord of the Rings—special extended edition, of course—a little bit each night before bedtime, because when you spend your childhood hunting for dragon eggs then a bit of orc slaughter is a lovely lullaby, and I am reminded of how much I admire Sam. Frodo is brave and true, of course, and he does personify the “little guy defeating the massive evil” trope beautifully. But Sam…ah Sam, he’s nothing special. He’d tell you that himself. Yet without Sam, Frodo never would have made it to Mordor. Frodo may have been destined to be the ring-bearer, but it’s the ordinary magic of friendship and loyalty that bears the bearer.

One of the reasons I love fantasy so much is the feeling it creates. When I finish reading a fantasy book, I feel as if the world is a little larger and more magical and I am a little stronger and braver than I was before. I believe it is (or can be) a literature of hope and empowerment. And I believe it’s important that the people who are empowered aren’t always the obvious ones.

So that’s why I wrote about Daleina.

I think it’s time to embrace the fact that Errol lost that Hogwarts letter. Accept that I’m not going to pull the sword from the stone. And there are perks to that. If I were sucked through a portal into a fantasy world, I’d most likely have to make do without indoor plumbing, Chapstick, or ever seeing my family again. That’s not okay. If I were destined to save the world, I wouldn’t get to choose how I live in it. And that’s the key:

Without a prophecy, you get to choose your destiny. You get to be the hero of your tale. Sheer determination is a magic in and of itself, and you can wield it, if you choose.

It won’t stop bad things from happening—certainly doesn’t for Daleina (sorry, Daleina!)—but I think what I’m trying to say is: you don’t have to be chosen to choose yourself. We are the heroes of our stories, and we don’t need anyone else’s permission to be powerful. You don’t have to wait for your Hogwarts letter. You are magical, exactly as you are.

Sarah Beth Durst is the author of ten fantasy novels for adults, teens, and children, including The Lost, Vessel, and The Girl Who Could Not Dream. She was awarded the 2013 Mythopoeic Fantasy Award and has been a finalist for SFWA’s Andre Norton Award three times. She is a graduate of Princeton University, where she spent four years studying English, writing about dragons, and wondering what the campus gargoyles would say if they could talk. Sarah lives in Stony Brook, New York, with her husband and children. Visit her at sarahbethdurst.com.