[Product Review] Get a Nio Tag and Stop Losing Stuff

A pricey but effective solution to a common problem. Always misplacing your stuff? The Nio Tag from Bluenio is a small, simple device that pairs with a smartphone app meant to solve that problem and more. Bluenio sent us one to review, and we tried it out for all its intended uses and then some. Here’s what we thought.

Bluenio sent us the Nio Tag pictured above a few months ago before we moved Geekosystem Headquarters to its current location in midtown Manhattan. Ironically, we lost it in the move. The worst part is that if we didn’t turn it off before packing, it would have been incredibly simple to find it.

The Nio Tag works by pairing to your Bluetooth-enabled smartphone or tablet. Once paired, the Tag and your phone can work together in a number of beautiful ways. The simplest use is probably as a locator/tracker. If you lose the Tag or whatever you’ve attached it to, you can trigger it to alarm remotely. The app even gives you a hot/cold display to let you know if you’re getting close. If we left the Tag on before we packed it, finding it in our new office would have taken a few minutes rather than a few weeks.

And leaving it on wouldn’t have been a problem. The Nio Tag boasts a 4-month standby battery life, so unless you’re constantly having to set it off to find your things, you shouldn’t have to worry about recharging it more than a few times per year using the included micro-usb charger.

The Nio Tag works both ways. Not only can you find it with your smartphone, but if it’s your phone that you can’t find, you can use the Nio Tag to trigger an alarm on your phone to track it down with a single press of a button. Even if that’s all it did, it’d probably be worth picking up if you’re the kind of person who is forever misplacing things, but it does a lot more.

You can also set the Nio Tag to go off when it gets too far away from your smartphone. At a party and you’re worried you’ll leave your umbrella behind? Stick the Nio Tag to it, and if you try to leave the party without it, your phone will go off as you walk out the door. My mother-in-law does this when she wants us to take home leftovers. She’ll take my wife’s car keys and put them in the refrigerator with the food. If we try to leave without an assortment of tupperware, we can’t get very far. The Nio Tag can function as a high-tech version of my mother-in-law.

The Bluenio website claims this feature can also be used for “Child Protection” with the line “Keep them close, even when you lose sight of them.” 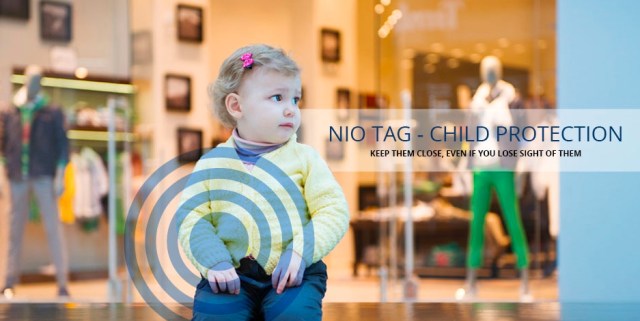 The idea being that you can Nio Tag your child like a penguin and track them in the wild. If your child wanders off in a crowd, they won’t get very far without setting off the alarm. It’s like a high-tech baby leash, which is better than a low-tech baby leash, because baby leashes are stupid.

I have a child, and as much as I love the Nio Tag, I don’t know that I’m ready to entrust it with my daughter’s safety. Still, I happened to be travelling during our review period so sure enough, I tagged my daughter at the airport. She’s just over a year old and not quite walking yet. Her primary means of transportation is scooting on the floor like a dog scratching its butt on the carpet—my point is that she’s not likely to get very far on her own.

While we waited for a flight, I set her loose and let her scoot around (keeping an eye on her the whole time because I’m not a monster). As expected, when she got out of range both the tag and my phone went off. She stopped scooting and looked around. We were in an open area without anyone around, but the Nio Tag is loud enough that it would have been easy to hear in most situations, even in a crowd. Just probably not at a concert or something particularly loud.

I’m not ready to endorse the Nio Tag as a child safety device entirely. It’s something that’s nice to have, but not something I’d suggest relying on instead of actually keeping an eye on your children in a crowded place.

The Nio Tag also works as a motion alarm. If you’re worried about someone making off with something you own, put a Nio Tag on it and if it moves you’ll hear it. There are also “NioSoft Tags” in the app that turn your smartphone or tablet into a Nio Tag, and therefore also a motion-sensitive alarm. This feature appears to only work with the iOS version of the app, and its not alone.

Nio Tag’s app is available in both iOS and Android versions, but at least for now the iOS version is a bit more substantial with several apps and features the Android version is lacking. Notably, the NioSafe app which lets you use your smartphone and Nio Tag for 2 Factor Authentication, or just use the Tag itself to unlock your secured information.

According to the Nio Tag site, the Android version should be caught up soon.

The Nio Tag will set you back almost $60, which seems a little high, but if you really are someone who’s always misplacing things, or an iPhone user in urgent need of an easy-to-use 2 Factor Authentication system, it might be worth picking up.