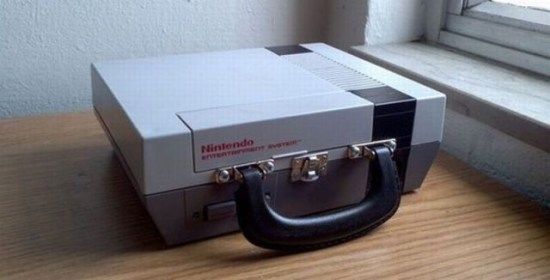 Find yourself in need of a portable 8-bit system that can make you look like a hip, on-the-ball, businessman from the 80s? Look no further than the briefcase NES. Need a few really awful “portable system” jokes? Look no further than this post. The new Nintendo ZS (get it? zero screens! HA!) is everything you could possible need for a long day at the office. Except controllers. And a television. And the applicable wires. And maybe a light gun if you want to play Duck Hunt. Maybe two, because the one of them only registers every other shot, but you’re little brother isn’t quite old enough to notice yet. Yup. A long day at the office.

It’s not entirely clear if this is an actual briefcase made from the hide of an NES that wasn’t quite mobile (ha?) enough to get away from its attacker or whether someone just bolted a handle onto their trusty system, but either way, it’s awesome and I want one. Not to play with or anything, but to put on my shelf and use as an excuse for ironically bad humor. The best use for anything.