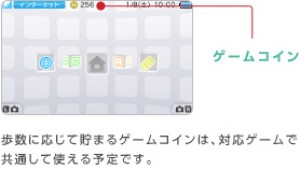 Before I get into the article, I must first point you to the post category tag and reiterate this is currently speculative, as a proper, detailed source hasn’t really turned up yet. Secondly, I must disclose that I can’t read Japanese, and have no idea if those screenshots are indicative of the 3DS Coins, but they were posted on a site that seems to know what’s up regarding said Coins. So, as the story goes, the upcoming Nintendo 3DS is said to include “Game Coins” which are accumulated through a pedometer via walking (or, let’s be honest, cheating and shaking the 3DS), that can be used to unlock in-game content. The coins are also said to be universal, allowing any game on the portable to use the system.

If the 3DS Coins are a real thing, they’re both really neat in theory, yet very dangerous in practice: If they’re meant to unlock game content, that means a portion of a game’s content will be locked on the cartridge to begin with, basically taking the reason for the argument against day one downloadable content (If DLC was available on day one, why didn’t you just put it on the disc in the first place? Oh, because you want me to spend more money.) and making it more pronounced, in that the content will actually already be on the game cartridge. Of course, this won’t be such a problem if we never have to pay for Game Coins, although people might get tired of walking everywhere (or shaking their 3DS while they watch TV) to experience the entirety of their game.

A universal coin system, on the other hand, would have a lot of promise, allowing players to earn coins from one game and spend them in another, although we could potentially see certain games having content that costs more coins than the game itself actually offers.

Assuming the Game Coins really do make it into the final product, I hope Nintendo has the foresight to make the portable sturdy enough to withstand hours of shaking.