Bury your gays IN A PILE OF JOY AND UNICORNS. 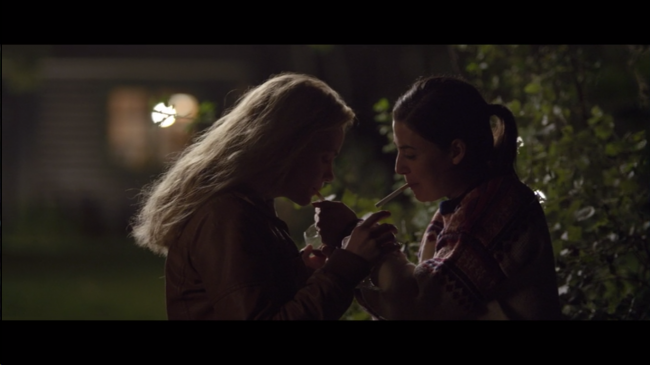 Kiss Me, via Wolfe Video & Netflix

Making this list ended up being much more difficult than I had imagined it would upon conception. My mind was occupied with a single thought: just what constitutes as a happy ending? There are films such as Andrew Haigh’s Weekend which I adore, but the endings of which strike more of a melancholy chord than a cheerful one. Blue is the Warmest Color has a similar tone, as our leading lady walks away from the camera, away from her ex and hopefully into a happy, less toxic light. The sad fact is that the majority of well known LGBTQIA films either end in death, fear or some sort of grief. Pariah was such a stressful film that I didn’t know where to place it on my list and Girlhood, while having its euphoric moments, also ended on a note of ambiguity.

There’s a lot that I learned while making this admittedly short list. I’ve realized that I haven’t seen as many LGBTQIA films as I’ve thought (much to my own disappointment) and, even given how hard it was to find LGBTQIA films with happy endings in the first place, it was harder still to find them featuring people of color. That being said, there are some films out there I’ve added to my list as of late that should help me delve deeper, such as Fire, Circumstance and Mosquita Y Mari. I’d love to see any and all recommendations you have in the comments below!

For now, here’s an easy guide to LGBTQIA films that won’t leave you feeling emotionally hollow by the end. Spoilers follow!

Perhaps one of my favorite romances ever, Alice Wu’s Saving Face tackles a number of themes that easily could have derailed and become somber. Instead, the mother-daughter relationship is tested, but not broken, while our leading lady is conflicted not over her sexuality, but rather how she reinforces that truth to her family. Instead, she gets the romantic comedy treatment, the race against the clock to the airport sequence, the awkward flirting that leads to more and the swoon-worthy reconciliation. And, most important to me, it’s immensely re-watchable, like all good rom-coms should be.

But I’m a Cheerleader

A film about a teenage girl being sent to a conversion therapy campy certainly doesn’t sound upbeat. However, the tone of the film is so critical of the practice (and celebratory of LGBTQIA love) that it’s hard to stay too dour. Aided by bubbly performances—Natasha Lyonne in particular is a standout—a vibrant set design and one of the sweetest, most heartwarmingly earnest endings I’ve ever seen, But I’m a Cheerleader escapes its sharply satirical lens to become something hopeful and genuine.

The Way He Looks

Directed by Daniel Ribeiro, the Brazilian film The Way He Looks embraces its unconventional storyline so confidently that all you notice is the sweet romance in the center and the strength of friendship surrounding it. Leonardo (Ghilherme Lobo) is a blind high schooler looking for independence, which he finds in the new kid, Gabriel (Fabio Audi). Touched by hazy summer heat and well-timed music, The Way He Looks casts an innocent gaze over first love and the awkward years of being a gay teen.

This was a rainy day find where I was motivated to do very little and instead just vegged in bed all day long. Netflix is home to a lot of B films and movies that were panned upon release, but every once in a while you find a gem, such as this barely-seen Swedish film. Lushly shot as if the characters resided in a music video, and with touching, tender interplay between the actresses, Kiss Me (also known as With Every Heartbeat) is the perfect romance to watch as the rain keeps you indoors.

A young man working as a hairdresser for a drag queen troupe desperately wants to be onstage, performing his heart out. His absentee father comes back to town at an ill-advised moment; chaos ensues. On paper, Viva sounds like a film that could have gone the familiar route of bogged-down familial drama, but while it does touch on that and there are somber moments peppered throughout, the film is ultimately about finding what brings you the most joy.

This film has a pretty low score on Rotten Tomatoes, much to my confusion. There’s nothing in me that believes Imagine Me & You is a great film, but it’s cute, easily digestible and, like Saving Face, it repositions the LGBTQIA storyline as a romantic comedy. Lena Headey and Piper Perabo have excellent chemistry that have us rooting for them the moment their eyes meet.

I suppose you could argue that there’s some sadness mixed in with the ending of this film, but the majority is spent deep in the throes of hope, as two groups come together to help each other in their causes. There’s something abundantly cheesy but also embarrassingly tear-inducing in the closing montages, as the coal miners walk hand in hand with the LGBTQIA group for their Pride march, coming together to fight against prejudice.

I wouldn’t go so far as to say I personally liked this movie (I really, really didn’t), but it has its supporters, and while it comes off as a film from the 80’s rather than today, it’s charming in its way. Katherine Heigl and Alexis Bledel play a couple on the brink of marriage as Jenny (Heigl) tries to rally her family to support their impending nuptials. In theory I like the idea of the film (especially its goofy wedding dance sequence), it’s just that the execution was lacking. However, I would love to see more films of Jenny’s Wedding‘s ilk: romantic comedies or family dramas surrounding an LGBTQIA couple where their sexuality isn’t the film’s biggest emotional hurdle.

I wanted to put Velvet Goldmine on this list as well, but if I’m being honest, there’s a good chunk of that film that escapes my memory. However, there’s plenty of Todd Haynes movies to love, especially his most recent: the critically-adored Carol. Playing with the subdued nature of the time and Haynes’ characters, Carol is silent glam, passion-filled gazes and lingering touches that pack as much heat as a full-on love scene. On top of all of that, and in addition to the blistering performances by Cate Blanchett and Rooney Mara, Carol also gets a happy ending and a chance at love that its two leading women weren’t sure they’d ever have. It’s a must-see for a many number of reasons, but the love story is at the very top.

Allyson Johnson is a twentysomething writer and a lover of film and all things pop-culture. She’s a film and television enthusiast and critic over at TheYoungFolks.com who spends too much of her free time on Netflix. Her idols are Jo March, Illana Glazer, and Amy Poehler. Check her out at her twitter @AllysonAJ or at The Young Folks.