Nightmare Before Christmas Actually About Cultural Appropriation | The Mary Sue 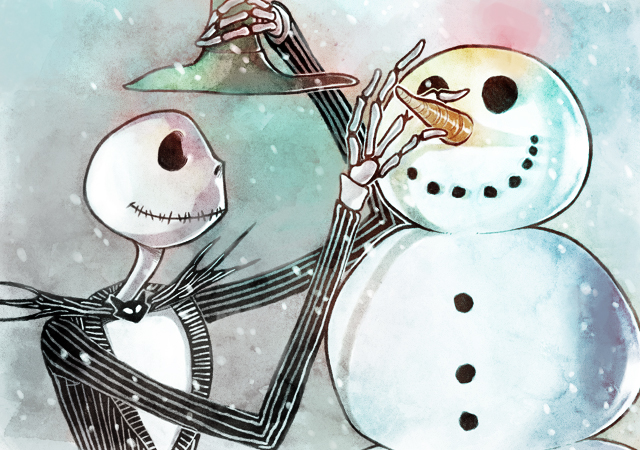 It’s Christmas time. Wreaths upon doors. Presents wrapped and under the tree. Songs of peace on earth and good will towards men. So … let’s talk about cultural appropriation! And kids movies!

The Nightmare Before Christmas came out over twenty years ago; and while I’m quite sure others have made this connection, it was only this Halloween (while a cover of “What’s This?” popped up on Pandora) that I realized Jack Skellington’s choices are an allegory for the real life appropriation of other cultures.

In case there’s any confusion over the term, law professor Susan Scafidi has defined “cultural appropriation” as “Taking intellectual property, traditional knowledge, cultural expressions, or artifacts from someone else’s culture without permission.” She goes on to say, “This can include unauthorized use of another culture’s dance, dress, music, language, folklore, cuisine, traditional medicine, religious symbols, etc. It’s most likely to be harmful when the source community is a minority group that has been oppressed or exploited in other ways or when the object of appropriation is particularly sensitive, e.g. sacred objects.”

Despite what some news programs will tell you about us being in a post-racist world, examples of cultural appropriation in the new millennium pop up all the time, most often used for “creative expression.” From Gwen Stefani recently defending her Harajuku Girls stereotypes, to Pharell wearing a Native American headdress during an Elle shoot, to Katy Perry’s ongoing stereotyping of black people in her videos. It’s certainly not just celebrities that do this — every October we see pictures from Halloween parties of racist costumes pulling from gross stereotypes/cheap imitations of real traditions and wearing them for a joke. Then there’s that Washington football team, Urban Outfitters using fake Navajo designs on their clothes (including the “Navajo hipster panty”), this recent bit of bad taste from Ralph Lauren, and countless designer fashion shoots that, like the Elle shoot, have used Native American headdresses.

With all of these, it comes down to repackaging and misrepresenting that culture, often for your own gain. Quite frankly, it’s a shitty thing to do whether you realize you’re doing it or not. So with that in mind, now let’s talk about how that happens in A Nightmare Before Christmas. (And just a note: I am a white woman and am certainly not the absolute authority on this subject. I encourage readers of color to add other examples of cultural appropriation to the comments because I know that my examples above are just a handful of many.)

Jack starts the movie uninspired. While everyone else in Halloween Town is ecstatic with that year’s Halloween extravaganza, their Pumpkin King has grown bored of his aesthetic. Of course then Jack wanders off, discovers Christmas Town, and is overjoyed to discover what is surrounding him. “What’s This?” is arguably the least spooky, least Halloween-sounding song in the whole movie, because he’s embraced the Christmas spirit so thoroughly. Now, he still doesn’t go and talk to anyone in this new place (which I always questioned as a kid because that alone could have possibly prevented so many of the disasters that come later), but he does fall in love with all these new things that inspire him.

However, when he goes back to his own town and brings back some of the Christmas-y things he’s found, he has difficulty explaining to his fellow Halloween creatures what each thing does and why it’s so wonderful. Nearly all of his subjects pipe up during the song to comment that it seems strange or to put it into the context of what they know. Jack knows that Christmas is not like Halloween and that it shouldn’t be like Halloween, but he doesn’t know how to put it into words. Finally, he “gives them what they want” and describes Santa Claus in a palatable way for the Halloween Town citizens; namely, that Santa is a demon with actual claws.

Up until this point, Jack doesn’t believe his own hype – but because he’s an artist and wants to figure out how to make something Christmasy like Christmas Town, he starts experimenting with the stuff he brought back. He spends days up in his room trying to come up with what makes Christmas so amazing, dissolving ornaments and making equations; and while he’s fascinated by it, he still comes back to, “But what does it all mean?” Jack has bits and pieces of what Christmas looks like, but he has no context for what actually makes Christmas what it is. Because of that, his experiments fail and he’s left frustrated by the whole process. It’s during the song “Jack’s Obsession” that he starts trying to reason with himself why he can’t figure this out. Instead of considering the possibility that the problem is with how he’s going about it, he decides the clear answer is that Christmas is inferior and it’s up to him to make it better. The song ends with:

You know, I think this Christmas thing
It’s not as tricky as it seems
And why should they have all the fun?
It should belong to anyone

Not anyone, in fact, but me
Why, I could make a Christmas tree
And there’s no reason I can find
I couldn’t handle Christmas time

And hence the iconic moment in the movie when bursts open the doors and shouts, “Eureka! This year, Christmas will be ours!”

From there we start to really see cultural appropriation come into play. The entirety of the “Making Christmas” montage highlights how one culture can cheapen another’s through careless imitation. They’re doing the standard making of the presents, wrapping the gifts, and getting the sleigh ready, but they’re “improving” it all by making it scary and gory. The similarities to fashion companies faking traditional tribal designs (but twisting them to be trendy) are apt. There’s a sense of entitlement here; entitlement and arrogance. The only person in town who questions all of it is Sally. Even though she’s nervous around the man she has feelings for, Sally tries her best to reason with Jack, but he doesn’t listen to her warnings.

And then we get to Christmas Eve and the ultimate appropriation of Christmas — literally stealing Santa. Of course, Jack doesn’t see it as kidnapping him. No, to Jack this is showing Santa all the good work they did and surprising him with a gift. Jack explains that they’re doing Santa a favor — “Consider it a vacation!” He never stops to think how he forced Santa there and gives him no opportunity to refuse the idea. No no, in Jack’s mind this is all how it should be, and he clearly knows best. It once again comes down to arrogance that he can clearly do this Christmas thing not only just as well, but better, by making it more like his stuff, with no communication with anyone from Christmas Town.

Of course, when this all backfires completely and Jack is left with his project in burning shambles around him, he has the good sense to realize he’s at fault for all of it. And being the hero of the story, he of course makes things right by saving Santa and Sally from Oogie Boogie’s clutches. With Boogie defeated, Jack apologizes earnestly to Santa for messing this all up. And Santa… is still pissed. And it’s great. He is clearly put out and doesn’t cheerily wave off the whole experience. Because like marginalized people when their cultures are appropriated, it’s not Santa’s responsibility to be tactful when dealing with someone who kidnapped him, disrespected his work, and then nearly got him killed. His snippy reaction is absolutely appropriate for the situation.

There is a sense that, after Santa fixes Jack’s messes and saves Christmas, Jolly Old Saint Nick does accept Jack’s apology as he calls out “Happy Halloween” to Jack and makes it snow in Halloween Town. This moment is important because it’s the first time someone from Christmas Town actually shares something Christmasy with Jack and the others — before this, it’s all about stealing away bits and pieces without Santa or his elves knowing. Suddenly, Jack’s fellow Halloween citizens start to “get” Christmas, indicated by the reprisal of Jack’s “What’s This?” song. The movie ends with everyone embracing this little bit of Christmas in a sincere way.

Now, there is a big difference between The Nightmare Before Christmas and actual examples of cultural appropriation — while Santa Claus is generally upset and annoyed by Jack’s bad choices, real world cultural appropriation tends to happen to people whose cultures have already been historically abused and exploited, particularly through colonialism. It perpetuates nasty, long-held stereotypes connected to those abuses, dehumanizes people who have already been treated badly, and is most often committed by people of privilege. So those aspects of appropriation are obviously not in the film.

However, The Nightmare Before Christmas is still a good allegory for the general idea of cultural appropriation. It’s one of the few pieces of mainstream kids media that brings up the concept. While certainly you can and should point to real life events to explain appropriation, this film is a good way to ease kids (and some adults) into understanding it and then applying the idea to those real life examples.

But I think what I like best is that the message of the movie isn’t that you should avoid learning about cultures outside your own. No, the lesson is to see how Jack went about it the wrong way and realize how he could have done it better. If you’re going to learn about other people’s cultures and traditions, approach it from a place of respect. Go to the people who live that life and treat them as the experts. Listen to others if they say you’re stepping over your bounds. Show humility. Ask questions in a respectful way. Don’t try to “improve” cultural elements just because that’s easier than understanding it fully. Above all, practice empathy. And that’s a pretty good lesson for us at any age.