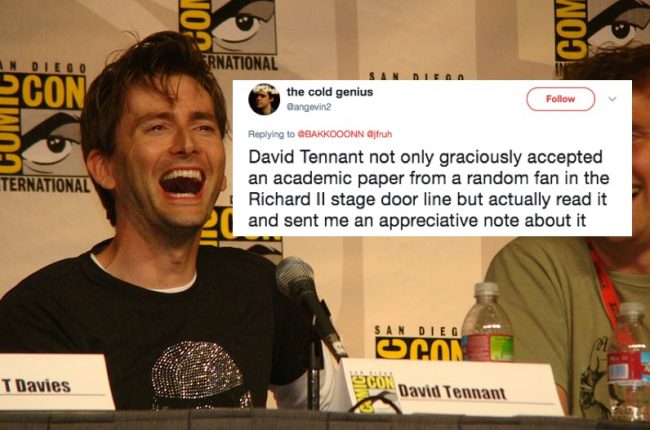 It’s rough out there emotion-wise, as day after day seems to arrive with fresh allegations that expose many of our famous faves as awful abusive creeps. So this Twitter chain wherein people share happy stories of fun celebrity encounters and anecdotes feels like balm for our wounds.

if anyone has any nice allegations against a celebrity that would be great too. does a famous actor give good christmas presents. does lady comedian alwyays smoke people out

Popular Twitter user BAKOON put out the call for “nice allegations” to come rolling in, and did they ever. Obviously, many of these stories are unconfirmable, so we should take them with a grain of salt; but celebrities are people too, who have had many real-life interactions, and some of them are actually pretty cool people at heart. Fame and fortune doesn’t have to render you into a power-hungry monster. Sometimes, you’re still just a guy who will make snacks for the person helping you out with tech support.

Here are some of my favorite replies:

i was an extra in a movie with Michael Keaton. He played frisbee with us, took pictures, and signed my friend’s Batman DVD

Danny DeVito tipped $120 to have two cases of wine one delivered one block to his apartment.

Can confirm. Chatted @ a con with Romero since he was signing outside of posted autograph hours. No line. Husband and I’s first date was all Romero movies. He said that sounded “horrible”. Haha

all of the 6 lead actors on the good place are unbelievably kind, cordial, and complimentary, in addition to being way funny & talented

Salma Hayek danced with my little sister at a party once, as did Shannon Doherty, and Spice Girl Mel C played Connect 4 with her. Lucy Liu was so incredibly kind and lovely when we worked together when I was nine that she became one of my first big crushes.

Alan Moore is an absolute sweetheart to fans. I went to a signing he did once and the line moved so slowly because he was striking up full-fledged conversations with everyone who stood in front of him (He and I talked about The Simpsons).

Celine Dion is the kind of person that includes you in the conversation if you’re standing nearby, which changed me as a person.

Michael Emerson did a show at my theater & spent a day planting flowers in a patch of dirt in front of the rehearsal hall. They were pretty.

I was at stage door for Richard II and someone said “I wrote a paper on you” to him! So that was you! I remember that

Laura Linney did an acting workshop at my college & made herself late for the presentation the school wanted her to do because one of the acting duos didn’t get a chance to work with her. She stayed in the green room and went through the whole process with them

My husband sat next to him at a film festival event in SF a couple years ago. When it was over, Keanu stayed and picked up other people’s trash.

There are a lot more stories to read on BAKOON’s thread, but these have helped to warm my heart considerably during this long dark slog of very bad allegations against the rich and famous that seems to have no end in sight. It’s nice enough to hear that someone whose work you admire isn’t a total dick to fans (many, many celebrities are, all other sorts of harassing behavior aside), but accounts like these, where famous folks seem to go above and beyond the call of duty, are really helping to restore some of my faith in humanity.

Here’s my favorite celebrity encounter: a few years ago I went to a John Oliver stand-up show, which was fantastic. Afterward he graciously mingled with the crowd, and I wanted to get his autograph, but I didn’t have a notebook on me. All I had was the book I was reading at the time, which was Samuel Pepys’ 1665 account of the Black Death in England, A Journal of the Plague Year, kind of a weird choice to present for autographing. Oliver was absolutely delightful when I approached with trepidation to ask him to sign the book, and this is what he wrote: 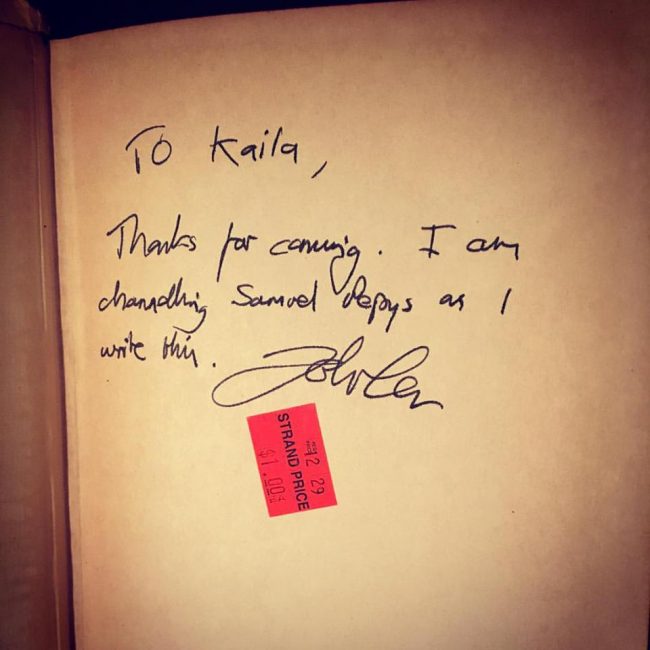 “I am channeling Samuel Pepys as I write this.” This book is now one of my more treasured possessions, and John Oliver is a damned good egg. He made a fan for life that night.

If you’ve had some fun and/or heart-warming celebrity encounters, tell us about ’em in the comments. I think we could all use some cheerful stories.