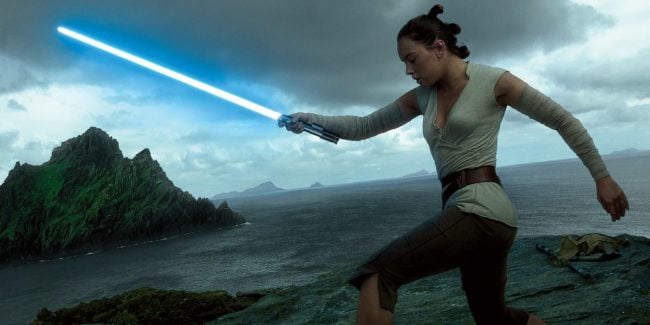 It’s apparently gotten to the point that trailer releases are as big a deal as film releases. At least, that’s what you’d think from the level of secrecy Disney/Lucasfilm have surrounding every single marketing move. Not even Mark Hamill being Luke Skywalker leaves him exempt from the consequences of the Mouse House.

Earlier this morning, in response to a fan question about when we can expect the next trailer for The Last Jedi, Hamill tweeted this: 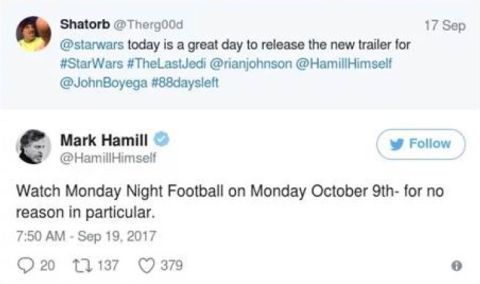 So … the next trailer for The Last Jedi is set to drop on October 9th during Monday Night Football. Thanks. Got it.

But apparently, we weren’t supposed to know that yet, and shortly after the above tweet was tweeted, it was deleted (but not before the internet screencapped it, obviously), and Hamill started answering the question very differently on Twitter:

I have no idea. Disney will announce when they are ready. #WaitForVIIITrailer

What I don’t get is what the big deal is. Like, we know when the movie is coming out (years in advance!), what’s the big deal about us knowing when the trailer is coming out? It’s not as though trailers themselves are a surprise. We know there’ll be more trailers, Disney. Us knowing when they’re coming is not going to keep us from watching them. I understand wanting to prevent spoilers of the actual film, but spoilers on marketing? Come on. We know how this works, and it’s really okay.

I mean, if the marketing tactic being employed was something like “On October 9th, members of the Last Jedi cast are gonna begin a North American tour to go to the homes of Star Wars fans and bake them cakes,” first of all 1) cool surprise, and 2) I’d understand wanting to keep that under wraps: because it is a cool surprise. Trailers aren’t surprises. They’re just trailers. They’re commercials. Disney is being protective of their commercials.

In any case, the next Last Jedi trailer should drop October 9th. That is, unless Disney changes the date, because it doesn’t want to risk spoiling its ads.