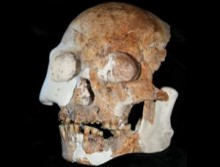 A new analysis of bones found in southern China say the remains could actually be from a new species. The skull seen pictured to the left was found in Longlin cave, Guangxi Province, in 1979, but has only now received a full analysis, which has found that the skull is anatomically unique among all members of known human species.

Darren Curnoe of the University of South Wales in Sydney Australia says the skull sports a mix of primitive features seen in human ancestors thousands of years ago, mixed with modern traits similar to those found in current humans. The 1979 remains aren’t the only appearance of this possible new species, as Curnoe and Ji Xueping of Yunnan University have found evidence of the new species at another site, in Malu cave in Yunnan province. Curnoe has named the species “Red Deer Cave” people, as the site has evidence that the people cooked large deer.

Curnoe says the Red Deer Cave people could be related to the earliest members of Homo sapiens, though he hopes they’re from a new evolutionary line that evolved parallel to Homo sapiens — like Neanderthals did — and feels this could be a possibility considering the remains look fairly different from our own species. Though, Chris Stringer, of the Natural History Museum of London, suggests the remains might be related to the Denisovan people, due to some of the remains features, and the fact that the Denisovans were living in East Asia.

Though we’re not entirely sure where the Red Deer Cave people belong in our evolutionary tree, they seem to have survived up until (relatively) recently, as some of the remains found are only 11,500 years old, which would mean they survived through the toughest portions of the most recent ice age. The next step in the process of placing the Red Deer Cave people in our history is to extract DNA from the remains, which was unsuccessful at first, though Curnoe is bringing in some topnotch DNA laboratories to assist the next time around.