What Actual Fresh Hell Is This Review of The Incredibles 2 in The New Yorker? 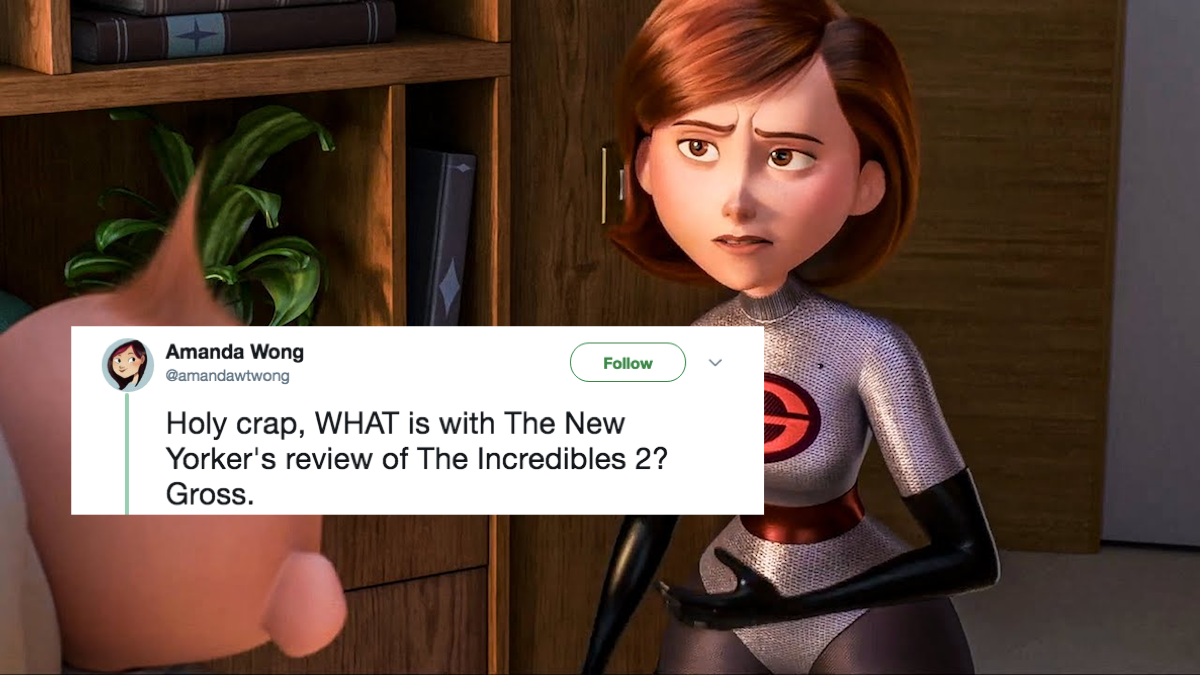 Hey everyone! I found it, the worst thing that you will ever read!

On Twitter, background artist Amanda Wong read New Yorker film critic Anthony Lane’s review of Pixar’s animated smash hit The Incredibles 2 and was kind enough to excerpt it for more mass consumption. “Kind,” but also I can never unsee this.

Here is what Lane had to say about this fun family film in that magazine of record:

Holy crap, WHAT is with The New Yorker’s review of The Incredibles 2? Gross. pic.twitter.com/2PCVW4BQga

Now, you know what, there’s nothing wrong with being attracted to animated characters. This isn’t intended to be a shaming of that. No, what’s mind-bogglingly head-scratching here is why Lane apparently felt the need to include these highly sexualized observations, which have nothing to do with the quality or plot of the film, in his review.

Wait, wait. It gets better, by which I mean vastly, incredibly worse. Here is Lane’s opening sentence of his review:

As a rule, any marriage in which one partner can willingly cry out to the other, “Trampoline me!,” inspires only envy and awe.

I would remind you that this film is rated PG, Mr. Lane—I’m not sure why your mind keeps going here:

I’m disappointed to report that the action in question is merely the manic pursuit of a gigantic drill that is whirring through a crowded city and demolishing everything in its path, rather than a lazy afternoon in the marital boudoir with the door discreetly shut.

And why you feel the need to tell the reading audience of The New Yorker about it.

At least he doesn’t refer to Elastigirl as wasp-waisted, I think to myself, at least not wasp-waisted, but oh, I thought wrong. For then I continued to read the review.

He is strong and she is stretchy; he is no more vexed by being pummelled by rocks than he would be by stubbing his toe, and she can flatten herself into a human pancake or, though normally waspish of waist, spread her torso into a handy parachute.

Lane goes on, after this auspicious beginning, to wax rhapsodic about his love for the original Incredibles—his attitude toward that film “resembled that of an ancient Egyptian toward the sun god, Ra,” and he manages to use the word “concatenation” and the phrase “sylvan hillside” within the next few paragraphs. This is, you are given to understand, an Intellectual High Brow Film Critic Who Knows Art.

The review continues on apace and somewhat more normally until Lane once again returns to his obsession with Elastigirl and her assets, which allows him to write the words “choked our yearning” (Lane is the first to have used this particular combination of letters, according to google) and to comment on the heroic super-mom’s skintight outfit:

First came “Mad Men,” which boasted its own range of period accoutrements, but which choked our yearning for the suits, the smokes, the frocks, the whiskey tumblers, the Sinatra albums, and the rest of the gear by reminding us of the society that they once adorned, with its oppressions both casual and institutional, and its half-concealed despairs. “Incredibles 2” can scarcely own up to those, not with young children in the audience, but what it can do, even without stating the dilemma, is to offer a solution. Hence the sight of Helen, accelerating off to work, away from her justly abandoned man, in her black mask, her long tall boots, and her empowering outfit, as tight as a second skin.

After that, he launches into the paragraph that Wong highlighted above. I call your attention again to this:

Because Mommy just leaned over to Daddy and whispered, “Is it just me, or does Mrs. Incredible kind of look like Anastasia in ‘Fifty Shades of Grey?’ You know, the girl in the Red Room, with the whips and all?” And Daddy just rested his cooling soda firmly in his lap and, like Mr. Incredible, tried very hard to think of algebra. As for how Daddy will react later on, during the scene in which Helen and the husky-voiced Evelyn unwind and simply talk, woman to woman, I hate to think, but watch out for flying popcorn.

You know what, there’s debate about what this last sentence even means amongst the Mary Sue staff, but none of the options are great. Is Daddy doing something inappropriate with the popcorn? Is Mommy throwing popcorn at Daddy because he’s so aroused by the mere sight of two women speaking together onscreen that he must be castigated? I feel like I need to douse my eyes in bleach. I’m sorry for making you consider these questions.

I have a few more quick questions for The New Yorker: what in the actual fresh hell is this review, and how are Lane’s comments remotely appropriate or related to Pixar’s The Incredibles 2? How did this get published without revision in what’s supposed to be one of the most scrupulously fine-combed and finely edited publications around?

I need to go lie down.

I believe we actually have a photo of Anthony Lane watching two women talk in a Pixar movie… pic.twitter.com/Fk9W1hmRpT

(via The New Yorker, image: Pixar)