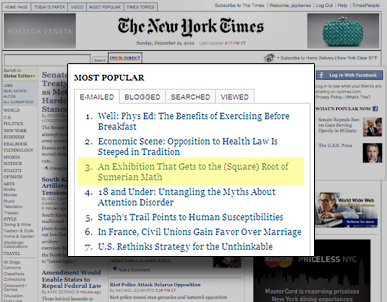 The “most e-mailed list” seems like an increasingly weird metric of popularity in this age of Facebook likes and Tweets and Stumbles and reblogs and what have you, but it’s still a staple on newspaper websites with older readerships.

As an experiment cleverly orchestrated by The Daily Beast illustrates, e-mail is just as subject to gaming as other measurements of popularity: It took writer Thomas E. Weber and a set of compatriots just 1,270 e-mails from different accounts to push a three-week-old story on a museum exhibition featuring Sumerian mathematical tablets to the #3 spot on the New York Times‘ “Most E-Mailed” list.

Clearly, roughly 1,300 email senders is more than a handful. On the other hand, 1,300 people wouldn’t be enough to sell out one performance of “Wicked” on Broadway. More to the point, it represents a tiny fraction of the Times’ overall readership. If our results are accurate—and a Times spokeswoman confirmed that the list is based on individual senders and did not have any disagreement with this story’s methodology—out of the 30-plus million Times website visitors each month, it takes only one out of every 25,000 emailing a particular story to secure it a spot, at least for a day, in the hallowed most-emailed list.

As for why the Times features most-emailed over most-viewed, the spokeswoman responded: “We think of emailing as a more engaged action than viewing or searching, since the user is taking a personal action by proactively sending the article to a specific person or group of people.”

If 4chan read either the Times or the Daily Beast, who knows what mischief this could lead to…