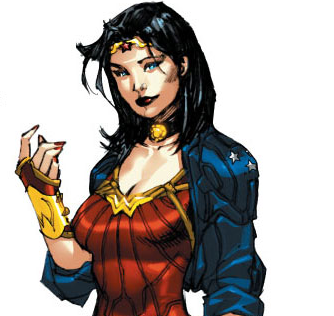 It was revealed yesterday in the New York Times, and now we’ve gotten the official word from The Source: Wonder Woman #600 releases today, with a new costume and a new backstory.

Well, it’s a new backstory in the same sense that Star Trek was a restart.  Literally.

The Gods, for reasons of their own but which may have something to with their survival and perhaps the survival of Earth itself, have changed the timeline. In the new timeline, years ago the Gods removed their protection from Paradise Island, and left it vulnerable to attack. And attacked it was. Led by a dark figure, a veritable army descended upon the Island, equipped with weapons that could kill even the Amazons. Outgunned, doomed, Hippolyta gave over her three-year-old daughter to a handful of guardians who spirited her away as Hippolyta led one last desperate battle against the forces that had come to destroy all she had created. In that final battle, she and most of the Amazons were killed, though some managed to escape.

Because Superman‘s origin was just so awesome we decided to give it to Wonder Woman too.  Also, can we just stop saying “the Gods” or “the Spectre” or “Superboy punching the space time continuum” and say the writers instead?

Here’s the new costume in full:

Wait.  Is that… nail polish?

We asked our sib blog Styleite to lend us their expertise, since this is one of the few areas where we overlap, and it’s so important to keep up those family ties, you know? Ruthie Friedlander, senior editor of Styelite, had this to say:

Well, it’s always really difficult to redesign an iconic outfit — be it Wonder Woman’s costume or a classic Chanel tweed suit.  I’m all for modernizing a classic, but putting a great and powerful woman in American Apparel leggings and a cheap looking bustier seems frankly unoriginal.

I, too, am skeptical of drastic remakes like this, since there is a reason the classic looks stick around so long, but over all… I don’t hate it.  It appears much more armored, although you probably shouldn’t be able to roll up the sleeves of your armored jacket, but how else would we ever see your gauntlets.  It covers a lot more skin, though your presumably bulletproof chestpiece should probably, you know, cover your chest and heart, but I guess the gauntlets may also be the answer to this one.  Speaking of which, you should take note of the W’s on her gauntlets, because, in defiance of all that is Mythbusters, they leave their marks on peoples faces.

The clothes alone should leave their mark — there shouldn’t have to be some sort of branding mechanism.

My tastes run towards a more regal Wonder Woman, but frankly the new origin story bothers me much more.  Setting aside its unoriginality, this movement away from the pacifist ambassador to a war-torn world and towards an urban commando is pretty jarring.  I feel like there are already plenty of urban commandos in the DC universe.  In every comic book universe, actually.  But we don’t have a lot of regal diplomats from a utopian island who live and breath Greek mythology.

I’m not too outraged, because I’m pretty confident that the changes won’t stick around too long.  The story of in the first arc seems to be Wonder Woman trying to figure out why the gods changed her history (that she doesn’t remember) and how to or whether to turn it back.  But I’m disappointed, because it feels a lot like this new, more action-y, Wonder Woman is a move towards a more male oriented Wonder Woman, which is understandable, but too bad.  Jim Lee, DC co-publisher and the designer behind the new costume, told the New York Times:

Wonder Woman is a strong, dynamic, vibrant character who should be selling in the top 20, and I’m going to do all I can to get her there.

As long as Wonder Woman comics are written for women they are not going to make it to the top 20.  There just aren’t enough women reading American super-hero comics to support a book at that level.  So the choices are: make the book historically incredible so that it appeals to all, which is, of course, difficult (for those of us who can’t make a book historic by repeating, against all evidence, that the book is totally historic you guys); or orient it towards the majority of your audience instead.

Will this female reader of American superhero comics pick up a copy of Wonder Woman #600 tonight?  Probably not.  I’m going to wait and see if it reviews well, and then maybe I’ll pick up the trade later. If I remember.  It’s really too bad.