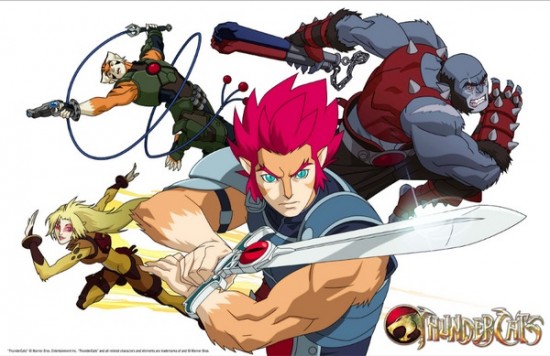 Topless Robot is in possession of this official image from the new ThunderCats cartoon. While some people might not be too keen on remakes, I actually think this one has potential for a pretty wicked reboot. Is it time for a new generation to have the ThunderCats in their lives? I would have to say “HOOOOOOOOOOOOH” to that. (That means “Yes.”) So, right off the bat, what’s different?

For one thing: the clothes. See, back in the ’80s, leotards were all the rage. And despite people trying to bring bodysuits back into the mainstream, Cheetara clearly rejected this terrible trend and freed her midriff. She also put some pants on. Everything else looks like your typical “We should and can do this better” update, and there’s nothing wrong with that.

Also, for those only familiar with the ThunderCats as portrayed on Robot Chicken (and I realize this is my second reference to Robot Chicken today), the main character Lion-o seems to look a bit younger. Well, in the original cartoon, Lion-o actually starts out as a (wimpy) teenager then becomes an adult when his suspension capsule was damaged, causing him to age quickly and become the strapping, bulky hero we know. So this new design seems to be a happy medium between the younger and older Lion-o.

But according to commenter “Dr. Abraxas,” the best update of all: Snarf doesn’t talk. So chances are this will be a pretty well-thought-out reboot. Welcome back, ThunderCats!