Are you Team Cap or Team Iron Man? (Wait, that sounds familiar.) 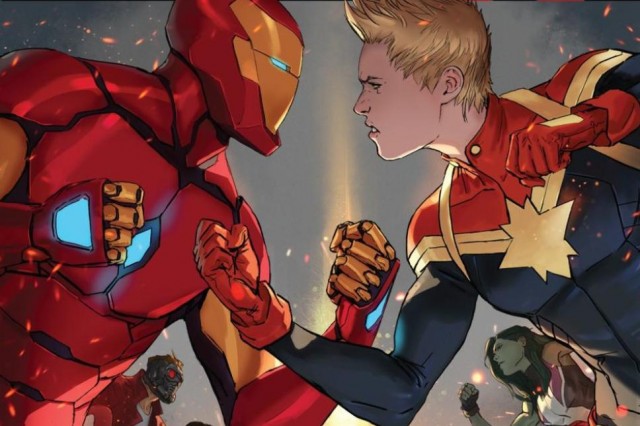 It’s been ten years since the Civil War event pitted two sides of the superhero world against one another–which, in turn, launched a series of films in the Marvel Cinematic Universe all leading up to the day that we’ll finally get to see that comic event happen in Captain America: Civil War. Now, Marvel is gearing up for another conflict that pits superhero against superhero–and this time, the teams are looking a little different.

We’ve already heard the news that Tony Stark would be going up against Carol Danvers, a.k.a. Captain Marvel–and from the looks of this teaser image, Kamala Khan (who took on the title of Ms. Marvel after Carol) may not be entirely supportive of her mentor.

Now we know exactly who’s going up against who in this reveal from Marvel, those who want to use the power of “predictive justice” to stop criminals before they act (Team Captain Marvel) versus those who believe that justice should only be served in the aftermath (Team Iron Man). Check out the match-ups below:

It looks like Iron Man is being backed by Hulk, Daredevil and Star-Lord, not to mention the new Thor–and hey, is that Deadpool hovering in the background? Meanwhile, Captain Marvel looks to have some pretty big back-up on her side, including She-Hulk, Captain America, War Machine and Spider-Man. Interesting, considering that Spider-Man was on the side of Tony Stark during the first Civil War event–at first, anyway. Also, according to Marvel editor Katie Kubert, Jessica Jones will also play a major part in Civil War II.

What do you think of this match-up (as well as who’s supporting who)? Which team would you side on: Team Cap or Team Iron Man? (Hey, doesn’t that sound familiar…)