There Are Going to Be “Multiple” New Oddworld Games 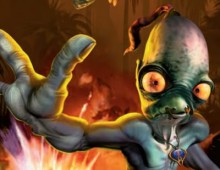 If you like farting, stitch-lipped Mudokons, great news for you: British game developers Just Add Water has announced that they’ll be bringing the Oddworld series back to life, launching “multiple projects, across multiple platforms” and working closely with Oddworld Inhabitants, the original creators of the series. Their blog post on the subject is sketchy on the specifics, but promises more detailed announcements in the coming weeks and months.

“To work with the team at Oddworld has been amazing; being able to tap the minds of Lorne Lanning, Sherry McKenna and others has been fantastic. It’s almost symbiotic in that when something moves forward on any of the projects we just start chatting about new items, or what if we do this. We’re all extremely excited to breathe life into the Oddworld universe and indeed to let it breathe life into us.”

Recently, Abe, the star of the Oddworld series, has joined Twitter; he’s proven that GameSpeak is still alive in this day and age, with tweets like “@zulag he he he <fart> #Oddworld.” If you go to Oddworld.com, to which Abe’s account is linked, you’ll see a message saying “New Site Coming Soon …”

As GamesIndustry.biz‘s Alec Meer points out, Just Add Water doesn’t have a ton of experience as a collective, but counts among its members some seasoned developers: “JAW’s only release to date is PSN and PSP arcade shooter Gravity Crash, but individually its team members have worked on 40 games over the last two decades.”