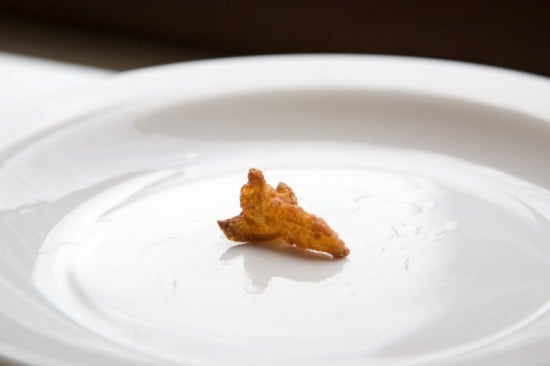 3D printing has exploded recently as the devices become cheaper, smaller, and easier to use. Now they’ve taken a turn for the gastronomic with the French Culinary Institute (located, oddly enough, in Manhattan) using the [email protected] printers to create ingenious new foods.

Like the familiar inkjet printers, 3D printers arrange small, controlled amounts of substances in order to create finished shapes. The food applications are pretty wide ranging, from the gimmicky, which include cheese and scallop space shuttles or a cake with different designs (or letters) on each slice, to the possibility of upgrading the home kitchen to new heights of cullinary achievement. From the Cornell Computational Synthesis Laboratory, which was involved in the food printing project:

Culinary knowledge and artistic skill of world renowned chefs can be abstracted to a 3D fabrication file and then used by laypeople to reproduce famous chefs’ work in the home. Also, expert knowledge of the world’s leading nutritionists can be abstracted and encoded in 3D fabrication files to help laypeople eat more healthily, without necessarily having to learn healthy cooking techniques or even understand nutritional principles such as caloric intake and protein balance.

That’s right, kids: Haute cuisine and custom-made health foods could be spitting out of a 3D printer in your kitchen. But the chefs at the Culinary Institute want to take it further, synthesizing new edible materials with shapes and properties never before possible. CBC news quotes Dave Arnold, the director of culinary technology at the institute positing this delicious prognostication:

I, for one, want that dream as a reality. And if I can print it out at home, then all the better.