I can’t quite put my finger on what’s wrong, but very little about this extensive new trailer makes me want to see the upcoming Bladerunner 2049.

Don’t get me wrong, the trailer looks absolutely exquisite. Director Denis Villeneuve (Arrival) and legendary cinematographer Roger Deakins have nailed the visuals to the wall. (Original Blade Runner director Ridley Scott is producing.) The evocative synth sounds running in the background summon all of my existing Blade Runner emotions and affections into existence. But other than a longing sort of nostalgia for what was, and admiration for the aesthetics on display, I can’t bring myself to be that psyched about this distant future.

As a reminder of how this movie’s positioned, here’s the official description that accompanied the trailer:

Thirty years after the events of the first film, a new blade runner, LAPD Officer K (Ryan Gosling), unearths a long-buried secret that has the potential to plunge what’s left of society into chaos. K’s discovery leads him on a quest to find Rick Deckard (Harrison Ford), a former LAPD blade runner who has been missing for 30 years.

I mean, yes, even just seeing more of Deckard in the flesh (?!?!? HE’S A REPLICANT OK DON’T TAKE THIS FROM ME) is pretty damn cool. Ryan Gosling is fine, Robin Wright is forever my favorite Amazonian general, there are a few attractive brown-haired young women, Jared Leto I can always do without but okay I guess. I can’t wait until Leto’s bad guy dies, hopefully while crying in the rain. Honestly, the opening fight scene with Gosling and Dave Bautista looks more intriguing than any of Leto’s scenery gnawing.

I’m finding it hard to put into words why this trailer doesn’t work for me nor make me feel particularly hopeful about the movie. It’s more of a feeling borne of many years of watching many, many trailers. This one feels like we’re being shown a series of elaborate set pieces and action scenes and recognizable actors snarling heavy-handed one-liners because maybe the movie doesn’t actually work as a whole. I want to be wrong about this. Tell me that I’m wrong about this.

I watched the trailer this morning with a huge Blade Runner fan whose reaction was thrilled excitement and an “OMG I can’t wait, I must see this now” response, so maybe I am just some kind of android who may or may not dream of electric sheep. But the YouTube trailer page is full of mixed reactions—some people quivering with anticipation, others experiencing a more “meh” take on the whole thing like me.

So what’s your view of the trailer? Please make me more hyped about this (or else tell me I’m not completely losing my ability to judge trailers and maybe the right response is caution). I really love Blade Runner and I want to be on board with its sequel, but I’m not convinced yet. 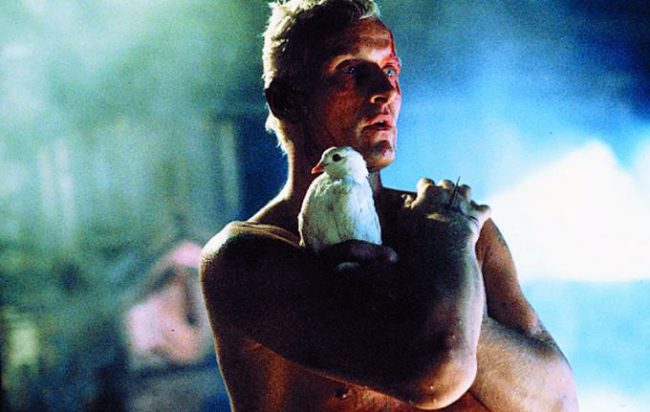 (Pictured: Me holding onto my original Blade Runner emotions)