New App Wants to Be Tinder But For Jobs 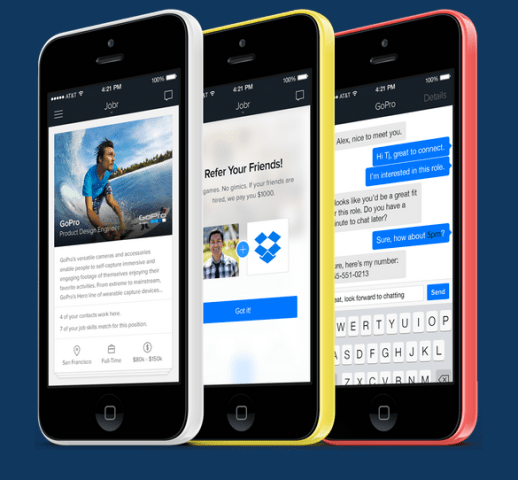 Called Jobr (because I guess Jobly already exists) this newly launched mobile app hopes to speed up and streamline the interactions between jobseekers and possible employers using a similar swiping pattern to Tinder’s. If you’re interested in a position, you swipe one direction; if you’re not, you swipe another. 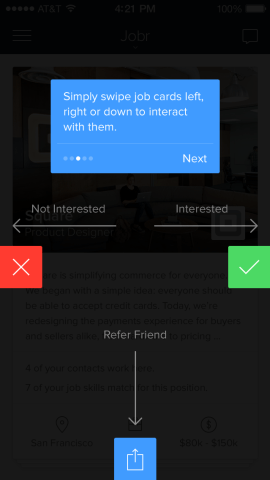 You can also refer friends to different positions by swiping down, and Jobr will supposedly give you $1000 if that friend is actually hired by the company you’ve referred. Gosh, I bet that won’t be really hard to scam by creating a fake company — let’s call it , I don’t know, “Vandelay Industries”) and then hiring your friend to a position over the app. Wonder how long it’ll be before somebody actually tries that?

In all seriousness, the app is fairly straightforward and surprisingly refreshing for a job hunting tool, which bodes well for its potential once it gets off the ground. There are odd drawbacks, of course– you need to connect it to your LinkedIn account, so you’re still stuck dealing with that website’s annoying interface. The preferences section also lets you limit your job search to “cool cities” only, which is just a little bit elitist, and obviously there aren’t exactly a lot of jobs to browse through yet unless you want to work for an app company in California somewhere (Facebook, Yelp, Snapchat, and Jobr itself all have listings).

However, it seems pretty easy to switch into recruiter mode and post a listing to the app if you’re the one who’s looking to hire employees, which makes it all the more likely that companies might actually use it. Hmm, yes. This bodes well for Vandelay Industries. I mean, okay, I’m sure they must have ways of making sure you don’t create fake business to get the $1000 reward, but you have to admit that watching somebody try to do just that would make for a really compelling half hour of television.

Speaking of which, I just looked up Jobly out of curiosity and it does exist, so somebody should probably get me a writing gig on Sillicon Valley already because I appear to have this “making fun of tech companies” thing on lock. If anybody sees Mike Judge’s name on Jobr, be sure to let me know.

(via Jobr, H/T to TechCrunch)