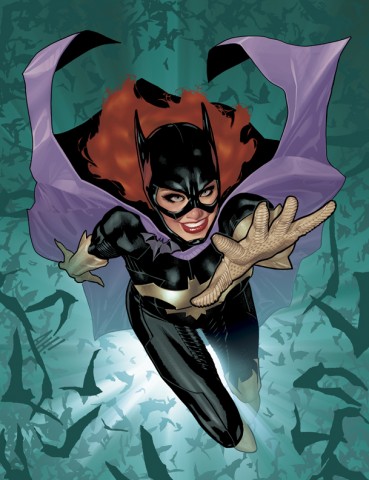 Head back to Part 1 if you’re lost!

Now that it’s just over a year since Batgirl’s shake-up was first announced, how does the work by Gail Simone and artists Ardian Syaf, Daniel Sampere, Fernando Pasarin and Robert Gill (with fill-ins from writers Marguerite Bennett and Ray Fawkes and artists Ed Benes and others) stack up? Reading it for the first time in trade form, I’d say it’s the dark side of the current run but equally as striking and effective.

Volume 3, Death of the Family is enthralling but frustrating for two reasons:

But it’ s still engrossing (albeit most likely triggering for some) because of the sheer horror of Joker, and what he does makes this the most emotionally fraught Barbara gets in the entire run. Several times, it’s repeated that no more will Batgirl suffer, but she winds up having to make some agonizing choices. Daniel Sampere takes over art, and he’s a smooth transition from Syaf with gorgeous work of his own. But again, the layout of collection details momentum, although the death of Damien Wayne (don’t worry, he’s back with superpowers now) is woven in very nicely to Barbara’s final confrontation with her brother as well as reflection on Commissioner Gordon’s part.

Let’s pause here and talk about the big, big reveal that’s also included in Volume 3. In the final issue of the story, after going through hell, Barbara stumbles home, and she and Alysia finally reveal themselves to each other. Babs explains what the Joker did to her and just how dangerous her brother is (who had been courting Alysia as part of his scheme), and Alysia—in the sequence seen around the Internet—reveals that she’s transgender, which she’s tried to tell Barbara before. Simone and Sampere deliver a short but landmark example of how to both introduce a transgender character and have another character properly accept them. If this run is remembered for nothing else, let it be that. And let there be much, much more of it and less transmisogyny in comics (and everywhere else). 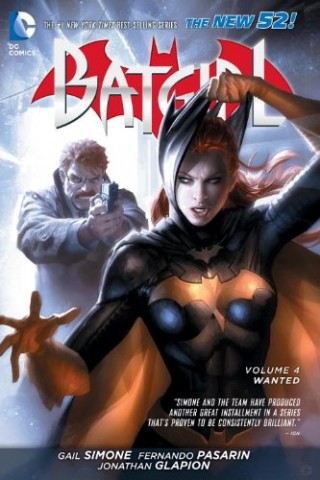 Volume four, Wanted, sees Pasarin come aboard as penciller. He has a slightly simpler style than Sampere or Syaf, but he still provides some very arresting visuals, particularly on close-ups of Barbara. Knightfall takes the stage again at the end, sending her henchmen after Commissioner Gordon, but before that, Babs has to deal with a new incarnation of the Ventriloquist. Far from the more familiar version, this Ventriloquist is a psychotic killer named Shauna Belzer who can control other people and dreams of making herself and her drills-for-hands puppet, Ferdie, famous by any means necessary.

The gore in this storyline amps up considerably. It’s an interesting shift in tone before Knightfall shows up but feels kind of isolated from the rest of the run, especially given how the collection includes a Forever Evil tie-in fleshing out the new Ventriloquist’s origin that doesn’t even have Batgirl in it. However, this tie-in and a Zero Year tie-in by Pasarin and writer Marguerite Bennett about a teenage Barbara leading her brother and others through a superstorm at least don’t feel out of place, unlike the other tie-ins in these volumes do

Simone and Co.’s tenure ends in Volume 5, Deadline, and everything is ramped up. Knightfall puts her big plan to eradicate Cherry Hill crime into action, and it results in a crazy finale that sees Batgirl, Black Canary, the Huntress (who is once again the daughter of Batman & Catwoman and a refugee from Earth-Two), and a who’s who of superheroines rise up to take down Knightfall. The whole arc ends on a hopeful note while stepping up the Birds of Prey stuff that gets first referenced in the last volume in a Batgirl/Poison Ivy story written by Marguerite Bennett.

Black Canary appears throughout this run as a key supportive figure, and she and Babs work and banter great together. Bringing her, Huntress, and all these other heroes in feels like Simone is aiming directly at her fans, who had followed her much-loved Birds of Prey run from the early 2000s. That’s a perfectly fine storytelling decision—DC Universe continuity can illuminate as much as obfuscate—but for a reader like me who hasn’t read that stuff and doesn’t know much about the Birds of Prey to begin with, some stuff can go over your head.

Pasarin and Robert Gill, a longtime comics artist doing his first superhero work here, have styles that work really well together but are still individually awesome. They’re both great at fight scenes, and I want more of their work. The thriller aspect of this book is turned up to eleven. Things escalate really fast, and while that works for immediate page-turning, it also means you might skip over something. 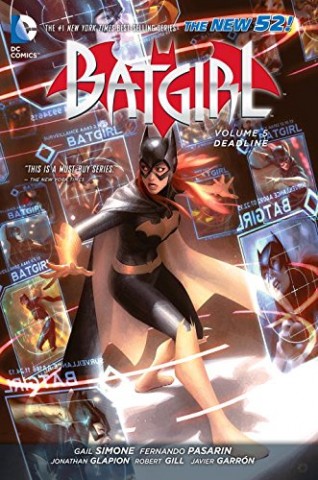 The final chapter in this book and Simone’s last Batgirl script at this time (never say never with comics) is a tie-in to last year’s Future’s End event (short version: 5 years from now, The Terminator happened in the DCU—that’s it) that sees Barbara looking like a distaff Bane confronting the villain (a favorite of Simone’s who she gives way more personality to than most writers) and leading a trio of younger Batgirls consisting of former cowl-wearers Stephanie Brown and Cassandra Cain and new character Tiffany Fox, an instantly winning twelve-year-old. She even has a joke repurposing one of the (many) bad lines from Batman & Robin, and it’s great. With bombastic, exciting artwork from Javier Garron, I put it down thinking it was way more fun and positive than just about anything else in Future’s End ever looked to me.

So. After going through nearly four years’ worth of comics in three weeks, do I think this run is as good as the current one? Yes; it’s a very solid run that just grabs the reader up and takes them along. It’s an excellent primer to Simone’s writing style and a showcase for some great artists who all do astounding work. This being a superhero comic, there’s not a lot of understatement, and the constant escalation can grate (then again this run was mostly read in a binge, which might have skewed my perspective a bit). My big gripe with it is ultimately in how the collected trades—which will beyond a doubt be how most people will read this run—break up the story in favor of advertising related events. If that turns off dyed-in-the-wool nerds like me, imagine what that will do to new readers.

I’m particularly incensed at how the DC PR people decided to mostly have quotes praising Simone instead of the artists, something that’s part of a trend all throughout modern comics culture to praise the writer instead of the artists in a visual medium. But still, this is top-tier superhero comics storytelling, and while Barbara’s PTSD being a huge factor on how she operates may not appeal to you, this is a run full of solid action, a great intro to Batgirl and what she’s about, and a good bridge for DC dorks like me and newcomers alike.

One more thing: I checked this whole run out from my public library (which, full disclosure, I also work at) to read it. Given her storied past as a librarian, I think Babs—and maybe even the late, great Yvonne Craig—would approve.

Tom Speelman is a contributor to The Mary Sue, Strange Horizons, Loser City and Sequart Organization. He’ll have an essay in a 2016 book on Star Wars comicsand yells about comics & music on Twitter @tomtificate.