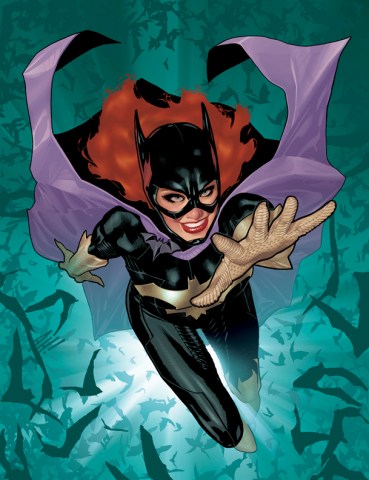 There’s no question that the soft reboot of Batgirl as “the Batgirl of Burnside” last October is one of the most seismic changes in recent DC history. Unfortunate missteps aside, this relaunch by Brenden Fletcher, Cameron Stewart, and comics neophyte-turned-Eisner-nominee Babs Tarr is the current focal point for the conversations about bringing women into comics that Captain Marvel kicked off three years ago and that’s paved the way for similar relaunches.

But there’s an interesting divide to Batgirl the monthly comic book. As much as the title, which kept its original numbering when the creative team switched, underwent a seismic shift between issues 34 and 35, fans of the book seem to vastly prefer either one or the other. For as much fan art populates the Batgirl of Burnside Tumblr (and it’s A LOT), there’s an equal amount of people who former Batgirl writer/living-monument-to-badassery Gail Simone retweets that thank her (and her run’s many artists) for entertaining and inspiring them with her run.

That’s especially interesting, since the common narrative the Internet has adopted is that the New 52 wasn’t so much about bringing in new readers (breakout hits aside) as appealing to existing comics fans (spoiler: I was one of those). The current “DC You” initiative, although it hasn’t been free from criticism, has been praised by some as what the New 52 should have been: bringing in more outside voices to reinvigorate the DC Universe rather than largely having the same group of writers and artists continue with a rejiggered timeline. While that’s a fair argument to make—it is worth noting that DC is seeing more critical praise and sales after broadening and diversifying their creative roster—it seems at odds with all the love folks have for stuff like the pre-Burnside Batgirl.

So now that it’s just over a year since Batgirl’s shake-up was first announced, how does the work by Simone and artists Ardian Syaf, Daniel Sampere, Fernando Pasarin and Robert Gill (with fill-ins from writers Marguerite Bennett and Ray Fawkes and artists Ed Benes and others) stack up? Reading it for the first time in trade form, I’d say it’s the dark side of the current run but equally as striking and effective.

Batgirl Vol. 1 , The Darkest Reflection, is a propulsive beginning. The hook of Barbara being freshly back in action and meeting her new supporting cast like her transgender activist roommate Alysia Yeoh (more on her below) while still dealing with PTSD from the events of The Killing Joke and the surgery that allowed her to walk again is fleshed out by two new villains whose origins make them walking survivor’s guilt.

That’d be Mirror, a lauded FBI agent whose family died in a car accident he survived and now wants all those who should’ve died horribly but didn’t (hint hint) to die for balance’s sake ala Final Destination, and Gretel, a would-be Lois Lane who got deep undercover with the mob, was found out and killed but given mind control powers. These new players feel threatening, and their motif doesn’t feel hamfisted. The ultimate point of these first few issues (and indeed the whole run) is showing that Batgirl can survive and thrive on her own, even while recovering from trauma. Heck, in the third issue, she decks Nightwing! Syaf’s terrific, gripping art enforces this. He’s able to sell the awesome action spectacle—like when Batgirl repeatedly smashes Mirror’s all-reflective armor—along with the few but significant quieter moments.

That’s one thing that surprised me, even knowing Simone’s other work: this run moves at a fast clip and knows just how to keep hooking you in over and over again, even if—because this is superhero storytelling—you know how it will end.

The second volume, Knightfall Descends, keeps that momentum going as Babs meets both Ricky Guiterriez, a would-be carjacker with a wannabe gangster brother who turns his life around after Babs saves him when his leg gets caught in a bear trap (ow); Grotesque, a snobby murderer in a gargoyle mask with lightning powers; and the run’s Big Bad, Knightfall aka Cherise Carnes, a wealthy sociopath acquitted of murdering her family (there’s a more tragic twist to it) who has a “maim/kill all criminals” policy for her and her super-powered henchmen and wants to use fear to control Gotham—specifically the declining Cherry Hill neighborhood she and Barbara both live in.

Just as Burnside is a character in the current run, this run heavily features Cherry Hill and how it factors into what was an ongoing thread of the Snyder/Capullo Batman at the beginning. As that series began, Bruce Wayne unveiled an initiative to repower Gotham through renovating dilapidated neighborhoods, which Batgirl shows is protested by a lot of people and activists like Alysia as gentrification. Babs, however, totally believes in Bruce’s plan and protects him from an assassination attempt by Gretel, but showing both sides of that question gives this series some depth and ties it to the flagship book in the Bat-Family.

Unfortunately, Volume 2 starts showing the problems of this title’s nature as part of the Batman Family and the particular problem with these collections. It’s here that tie-in issues to whatever the current Bat-event was at the time start popping up, and it’s really a mixed bag. While the tie-in stories are interesting and compelling, they detract from the main story thread by sparking your curiosity about the events instead.

Here, there’s the tie-in to Night of the Owls, the 2012 event where the Court of Owls—a secret society with hyper-deadly immortal assassins called Talons if you didn’t know/haven’t read Batman yet—launch an all-out assault on Gotham to rebuild it with themselves in charge. While the Batgirl tie-in has a really compelling hook of Babs confronting a mute Talon named Mary from the 1940s, it ends in a way that is obviously only resolved by the rest of the event. Going back to the main thread after that makes the (again quite good) story, despite an interesting hook, feel inconsequential and rushed in the context of the trade. Conversely, the “0” issue showing Babs’ first outing as Batgirl (part of a September 2012 gimmick where every DC book did a flashback issue) is a great new origin story with kinetic art by Ed Benes.

Still, Knightfall and her crew are really interesting villains, and Clarice’s full backstory is affecting. Syaf’s art still excites and captivates; even when other artists have to assist and fill-in, it all feels united. The humor mixed with the combat and the drama around threads like Barbara’s mother coming back suddenly after taking off when Barbara was 12 really stick.

[Don’t miss the conclusion, where we examine the last three volumes, in Part 2!]

Tom Speelman is a contributor to The Mary Sue, Strange Horizons, Loser City and Sequart Organization. He’ll have an essay in a 2016 book on Star Wars comics and yells about comics & music on Twitter @tomtificate.