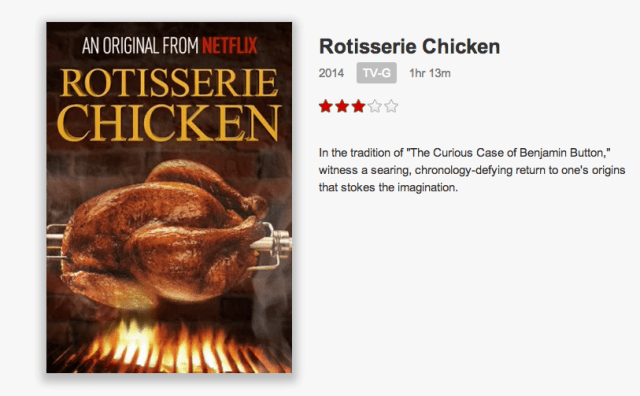 If Netflix and Hulu are competing in the fake original content prank wars, than my vote goes to Netflix and their mouthwatering new programming: 73-minute Original Series Rotisserie Chicken and Memento-like action film Sizzling Bacon.

In the tradition of “The Curious Case of Benjamin Button,” witness a searing, chronology-defying return to one’s origins that stokes the imagination.

I didn’t binge-watch the entire series, because, as one Netflix reviewer says, that would be a “Poor use of thyme,” so I’m not sure if the Benjamin Button reference ever manifests in any relevant way. If there is some sort of trippy chicken reveal at the end, someone feel free to spoil it for me.

The series has been given 3/5 stars–probably because the sound of the spit turning is too grating to spend more than a few minutes mesmerized by the bird’s rotations. Here’s a sample review:

The boundaries of TV and time go up in smoke with this tasteful, “Memento”-style puzzle that takes the viewer out of the fire and into the frying pan.

Personally I found Sizzling Bacon to be far more compelling in both content and execution. It may be critically, um, panned, but at least it’s not too chicken to turn up the heat.

Wow, the internet is silly today.

(via Business Insider and Orlando M. Vazquez, image via Netflix)