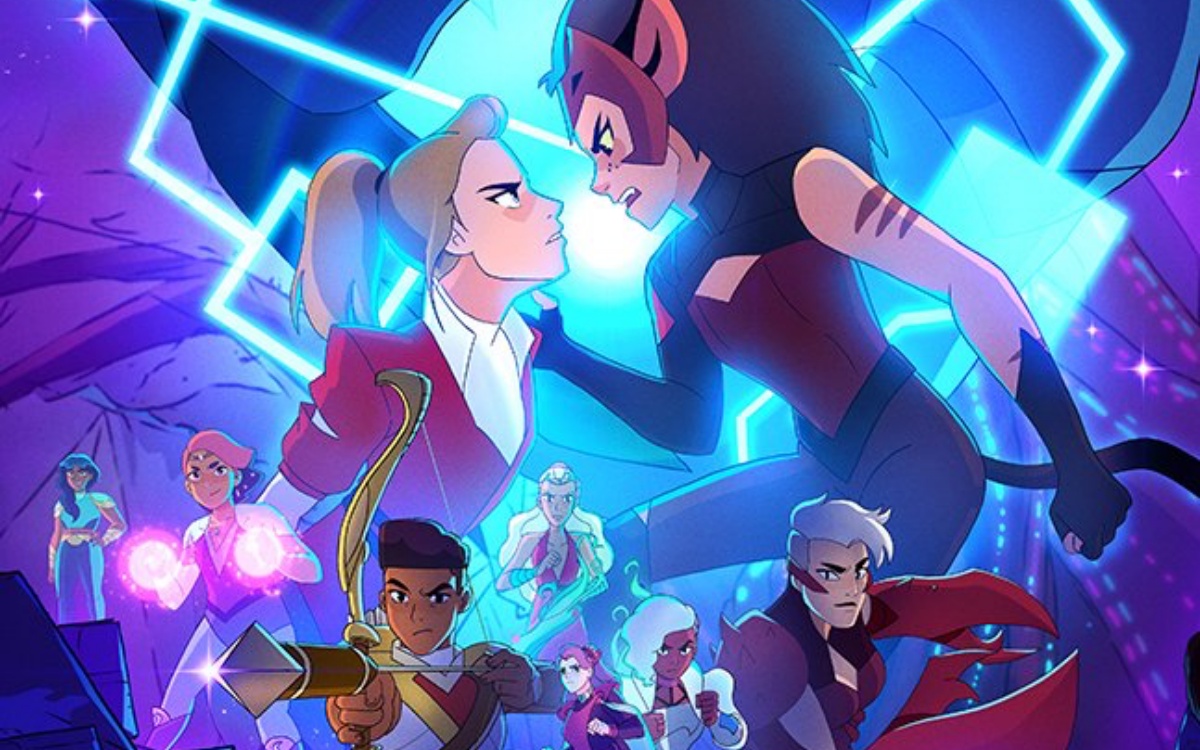 It seems surreal that Netflix’s She-Ra and the Princesses of Power debuts its final season in two days, but thankfully, the show is not only near perfect, but it stays true to its core messages of strength, compassion, and love.

New poster for the final season of #SheRa! pic.twitter.com/x27rc92Hgl

When we last saw the cast, Adora (Aimee Carrero) destroyed the sword, seemingly breaking her connection to She-Ra, in order to stop the First One’s weapon from murking the universe. Glimmer (Karen Fukuhara) and Catra (AJ Michalka) were captured by Horde Prime (Keston John), and the imperialist clone army he possessed was now in perfect range to complete the takeover of the world. Basically, it was bleak.

This is why the amazing light that shone through this entire final season was gratifying, as someone who loves great narratives, but as someone who finds works about optimism, moral greyness, and real redemption compelling.

Adora, as a hero, is plagued by similar insecurities to Catra, but the fact that she has a destiny grounds her and keeps her focus on saving people. It is in the act of heroism that she feels strong, so when Adora loses that connection to She-Ra, it leaves her adrift, chasing that identity. Very often, the plucky protagonist gets the least character development of their cast, but I think this season really shows, more than any other, why Adora is the perfect hero. Usagi would be proud.

Bow (Marcus Scribner) really gets a lot of time to shine this season. He has been the glue that holds everything together emotionally for a long time, but he’s also one of the smartest and most tactical members of the team. He wants to protect everyone and save his best friend, while also making sure as many people survive as possible.

Glimmer and Catra get some opportunities to talk on Horde Prime’s ship, and these two foils in Adora’s friend circle really shine together. There is a lot of baggage between them, but an early episode highlights their big similarity: They are teenagers who were put into this situation by the same malevolent force. They shouldn’t be on opposite sides, but life pushed them in that way.

All the supporting players get to play a big role in the finale. No one is excluded; even Netossa (Krystal Joy Brown) and Spinnerella (Noelle Stevenson) get an important focus.

Our true big bad, Horde Prime, has a desire for a homogeneous world in his own image that’s played with a cool malevolence that perfectly separates him for Hordak, despite them sharing a voice actor. He is chilling and cruel, but narratively, he serves to highlight how an empire such as his spreads: mythology and misinformation. Defeating him isn’t just about destroying an army, but the idea that one person can paint themselves as a perfect being.

Coming into She-Ra, I wasn’t really a fan of the original series, although I was aware of it simply because of the culture. The intense backlash against it from older male fans was so overwhelming that I wanted the new iteration to succeed based on that alone, but I wasn’t yet sure how I felt until I saw the She-Ra transformation sequence. As a magical girl fan, that spoke to my heart, so when I did finally catch up on the series, I found a show that was built upon a foundation of queerness, feminism, and just good storytelling.

From Adora to Catra to Glimmer to even Shadow Weaver, all of these female characters were allowed to be emotionally complex, flawed, and grow. As I mentioned in a previous article about the expectations put on teen characters, I realized that what I love about the show is that it fully understands how complicated it can be to grow up in a time of chaos. It has empathy for the realities that force people into a dark place where they would align themselves with the very figures that have harmed them.

Yet, there are consequences. Much like Steven Universe, there is an emphasis on forgiveness and allowing those who want to be redeemed to change, but there is also no erasing of the pain. You aren’t given a blank slate, but you are allowed the chance of another canvass. What you do with that one is the real test. I think that is a really important message for young people, especially young women who have been told, in many forms of media, that mental illness and emotional abuse just turn you into a villain (cough Dany and Azula cough).

I have no doubt that Catra’s arc will be divisive to many, but as someone who has loved her and has seen her as someone who has struggled to find something genuinely lovable in herself, I was impressed at how they handled her in this final hour.

There have been those who have accused She-Ra of queerbaiting, and I have never found that argument to hold water when we have confirmed queer characters and happy queer couples in the show, but season five will really force those who accused the show of that to ask themselves if they only mean their own ship. The relationship between Spinnerella and Netossa gets to be front and center in the latter half of the season, and there is no ambiguity. They are in a healthy, loving lesbian marriage, and that should matter in our conversation about representation—especially when this couple features a fat woman and a dark-skinned woman of color.

LGBTQ television for children has changed a lot in the past ten years, to the point where going backward seems impossible. More and more, we see not just queer leads, but queer creators being at the forefront of this change. She-Ra has been part of that change. It has had consistently great-to-excellent writing and has used its platform to show one more step forward in what is possible.

Now, no one can say you can’t have nonbinary characters, body diversity, outwardly gay heroes, or morally grey catgirls as leads. It’s already been done. I am happy with the way the show has come together, and I’m so looking forward to seeing what series creator Noelle Stevenson helps to create in the future.

We won in the end.

Get ready to see it all May 15th on Netflix.

DreamWorks AnimationNetflixShe-Ra and the Princesses of Power