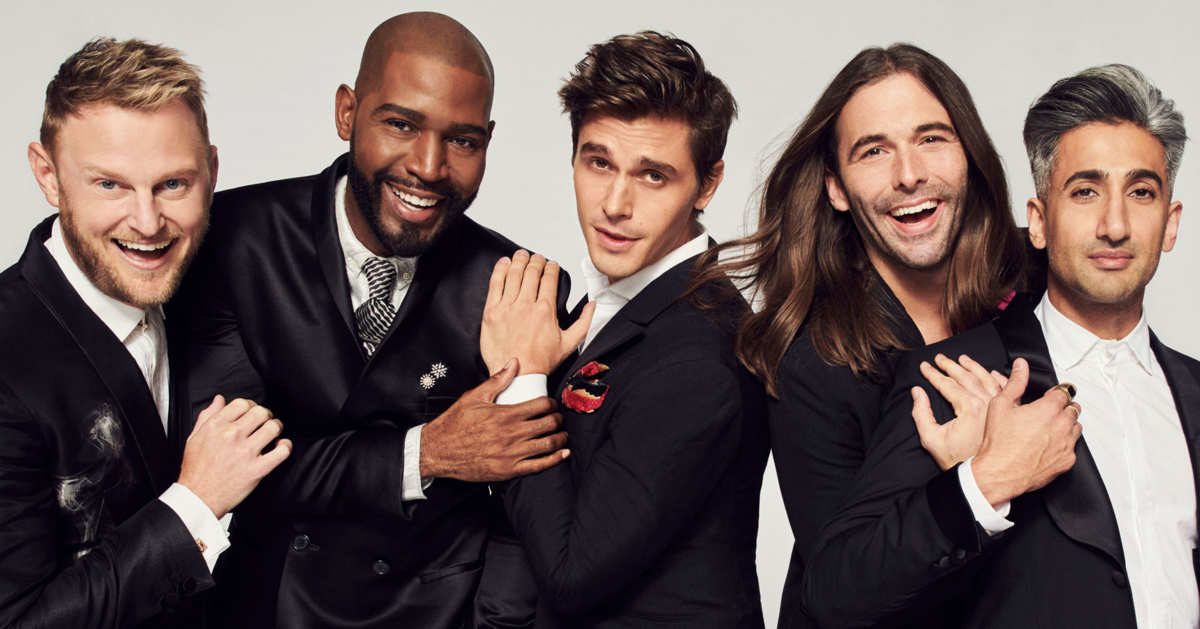 [Mild spoilers for the first three episodes of Queer Eye]

Netflix brought the groundbreaking reality show Queer Eye for the Straight Guy back to life in an America that needs it more than ever.

The fun, and, yes, very campy show Queer Eye For the Straight Guy (later shortened to Queer Eye to not limit the makeovers by gender or sexual orientation) was a sensation when it hit Bravo in 2003. The initial premise was that five gay men, experts in their respective fields of fashion, style, personal grooming, interior design, and culture, would be called in each week to change the life of a hopelessly clueless straight man.

By the time they left, the guy would be dressed well, perfectly coiffed, have his living space remade, and generally taught to be more confident or sensitive or at least ready to cook dinner for his wife for the first time. The show was light-hearted and well-intentioned. While it certainly played on many stereotypes surrounding both queer and straight men, what’s important to remember is that nothing like this had ever been seen on television before: queer men viewed as adored paragons of their field, swooping in to better straight men’s messy lives and make their partners and families happier, too.

The show was not without criticism, some of it harsh but also spot-on, as Wikipedia points out:

The series attracted criticism for making generalizations about sexual identity, namely that homosexual men are inherently more fashionable and stylish than heterosexuals. Among those making this critique were Tom Shales in the Washington Post (“stereotypes on parade”), Richard Goldstein in Village Voice (“Haven’t fags always been consigned to the role of body servant?”) and United States Congressman Barney Frank speaking to the New York Post.

But overall the reception was positive and the ratings impressive, with OUT calling the show one of the year’s “greatest gay success stories,” and its wide dissemination helping to introduce queer men into the households of millions of people who might never have seen them depicted in a positive light before, or knew any out queer people themselves. It put stereotypes on parade, yes, but I believe it was ultimately more important for its ability to break down barriers.

The same basic formula is back with Netflix’s new Queer Eye reboot, but the show is also far more overtly political than I would have imagined. Basing the series in Georgia provides for initial subjects that seem straight out of Trump’s America—the new Fab Five even find a MAGA hat in one man’s possession. But what’s wonderful here is that the stereotypes that are being tackled often seem to be those of masculinity and, well, the types of people who would vote for Donald Trump. America at large knows queer people now; it sees far less of “straight” men getting to display sensitivity and interest in activities too often still branded as feminine or queer.

As Nascar-loving tough guys and career cops and introverted tech guys frolic while bed-shopping with the Fab Five or break down in tears because they’ve made such an emotional connection with the people helping to overhaul their lives, it forces me to recognize that I hold plenty of unexamined stereotypes.

Why should I be surprised that these “straight” Southern men are capable of deep empathy and accepting others just because of their age or profession or where they live? Much of the oft-hidden greatness of America is evident in the new Queer Eye—that despite our divisions, progress and acceptance really can advance with time—as do civil rights, even if we had to fight tooth and nail to gain them.

Several members of the new Fab Five are married to their partners, a legal status that was not possible nationwide in 2003 when the original series came into being. They discuss their boyfriends, their husbands, their children—language that was never included on the show before. And the cast is significantly more diverse, better reflecting the realities of both America and the queer community.

The new Queer Eye hardly glosses over the fraught time we’re occupying in America. In fact, it was important to the creators to ground the narratives “to reflect the current social and political climate.” The episode featuring a police officer is laced through with commentary about the racism that afflicts much of America’s policing: it kicks off with the guys’ car being pulled over, and Culture guru Karamo Brown, who is black and driving the car, is frightened, and then angry, when it’s revealed to be a stunt (the cop pulling them over is the one who sent his friend in to be made over).

But later, Brown and the episode’s cop, Cory, have an honest conversation about race and policing as they drive alone together for a long stretch, and it’s one of the more remarkable scenes of TV that I’ve seen in a long time. It’s a conversation that I wish all of America could watch, and by the end, Cory says that it was the most important part of the experience for him. Brown explained the episode’s significance for him and on a wider social scale:

“That episode was so important for me, because I was closed off to police officers 1000 percent,” Brown said. “Being a father of two black boys, I just was scared for my own life and my children’s lives. And I brought that piece of me into the room, in the conversation.

“Other shows might’ve been, ‘It’s a make-better show, you’re gay, just talk about that,’” he added. “But this show allowed us to have that conversation. Now I’ve made a lifelong friend, and respect police officers in a way I did not before, and also know that not all police officers are bad. I know that sounds really lame, but those moments, that conversation allowed me to be open and allowed him to open up as well… It’s sort of like the seed that was planted in this manure of a situation that grew to this beautiful flower of a friendship.”

The new Queer Eye is certainly not without its share of stereotypes. It doesn’t help anyone in our culture of toxic masculinity to forward the idea that things like fashion, eating well, and openly caring about others are the province of one sexuality above another. But this is a much more self-aware and critically thinking Queer Eye, and it feels primed for our era: it is about forging diverse connections when many in power are seeking to deepen divisions. It is warm-hearted and kind in a time that is not.

The sheer amount of love and affection on display is intoxicating. Executive producer David Collins told IndieWire what’s different this time around:

“They’re getting to come to the table and create a dialogue,” he said. “Before I think it was more of a monologue where ‘I’m gonna tell you and you’re gonna tell me’ as opposed to a true dialogue. That’s what’s happening I think in these shows right now is that the episodic heroes are guys, are having conversations that are a little about politics and religion, are about marriage and divorce and kids, and we get to see this more authentic side of the Fab Five, and it definitely breaks down the walls to allow the dialogue to be more interesting, and quite frankly more heartfelt and powerful.”

Heartfelt is right. To see the friendships made between the people on this show often feels like a revelation in a bleak American moment, and there are scenes that will make you tear up. It’s inspirational on many levels, from changing long-ingrained perspectives to making you want to finish up an unfinished project around the house.

The show is also a lot of fun—and the “transformations” attained in terms of dress, styling and interior decoration are often absolutely stunning—and you’ll learn some excellent new recipes from Food specialist Antoni Porowksi. Now if you’ll pardon me, I have a fancy grilled cheese to go make.

Anyone watch Queer Eye? from r/netflix