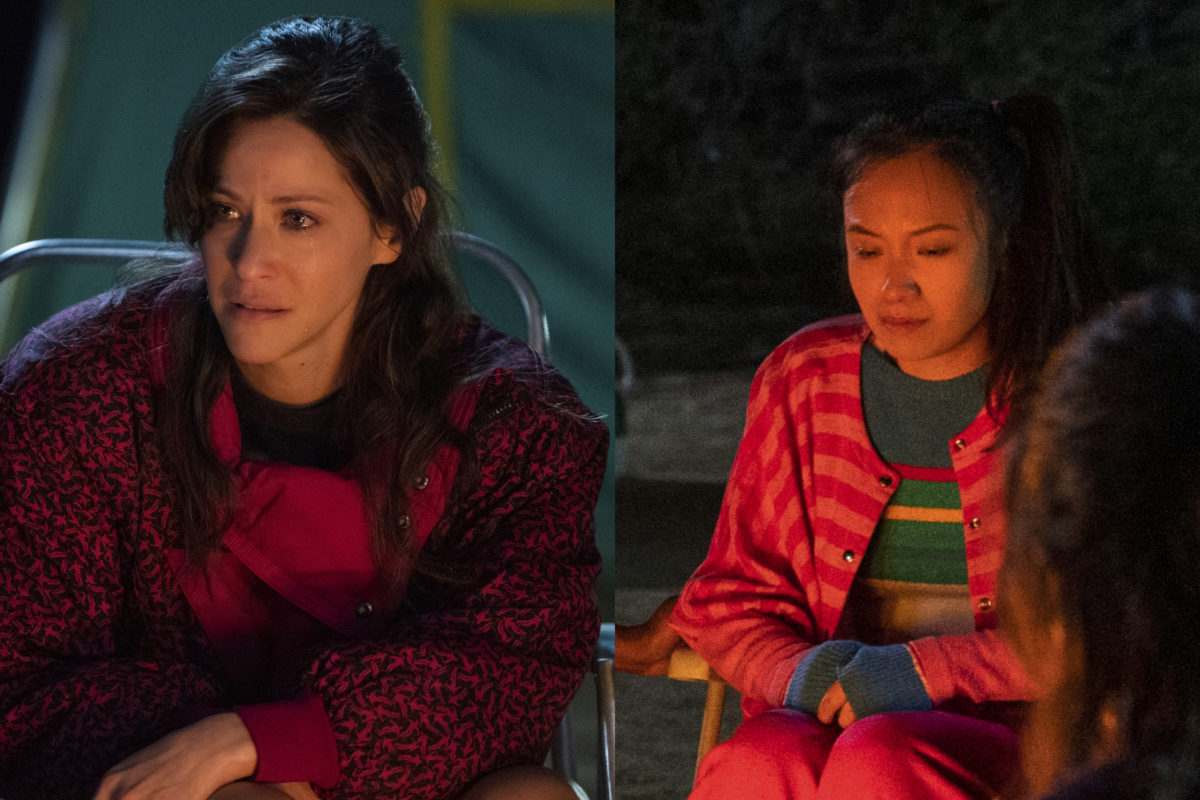 GLOW season three gifted us with one of the most intense, beautiful, and necessary episodes of television this season.

In episode six, “Outward Bound,” the gorgeous ladies of wrestling go on a trip to the desert. What was supposed to be a relaxing break from their stint in Vegas turns into an unlikely yet important discussion about inherited trauma and unconscious bias.

**Warning: spoilers for GLOW season 3 ahead.**

The most crucial exchange involves Melrose (Jackie Tohn) and Jenny (Ellen Wong). These two besties are finally able to put into words the horrific experiences of their families, who fled the Holocaust and the Cambodian genocide, respectively.

“I think it’s so rare to be on a show with more than one woman. There are fourteen women [on GLOW]! And then to be given the opportunity to tell these important, untold, underrepresented stories is just completely next level,” Tohn told us in an interview.

Such a topic might seem too serious for the beautiful “bunch of clowns” that the audience has grown to love, but the other ladies were just amazingly supportive while on set and helped Tohn and Wong deliver a deeply moving ensemble moment. “It was really awesome to be able to do the scene with the whole cast there,” Wong said. “To be sitting around in a circle and to be sharing through our characters was really special because we could really feel the support and energy, the vibe from all of our GLOW sisters.”

“[They were] silent and supportive and crying with us, hugging us, and holding us. That, for me, was a huge part,” Tohn echoed Wong’s feelings. What gave the episode an even bigger significance was that both actors were telling their own families’ stories. “Ellen and I had this incredible, rare honor to memorialize our families on television,” Tohn said.

The other actors “were supportive as our friends in real life to say, ‘We know that this is an important story for you to tell not just as Melrose and Jenny, but as Jackie and Ellen, and if there’s anything you need, we can talk about it,’” Wong recalled. “It was really incredible. I had never experienced that before on any other set.” 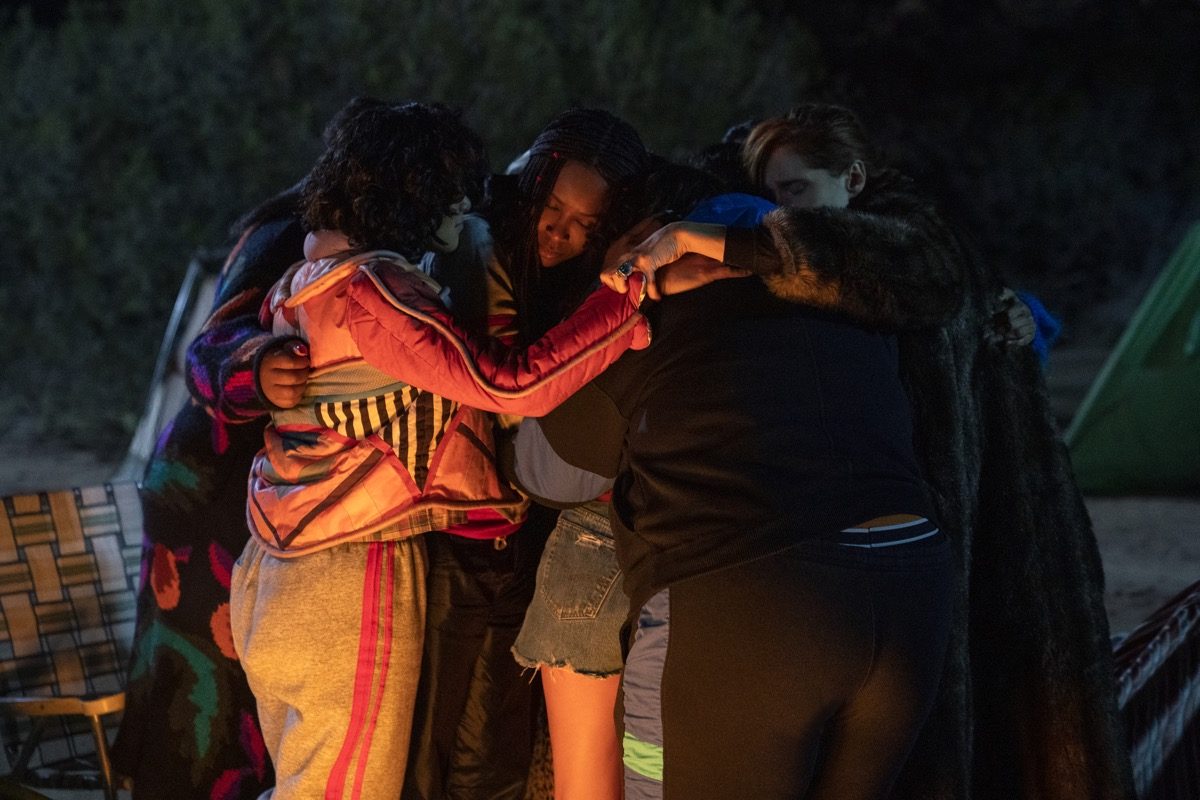 “I used the name of my actual great-aunt Pesel [in that scene]. I asked the writer if I could change the name in the script of the woman that died in the Holocaust to my actual great-aunt’s name,” Tohn said. Tohn’s family escaped from the Nazis during World War Two and finally moved to the U.S. after the war.

“My mom was an immigrant in the ’50s and was very embarrassed about it. She had a name from another country; her parents had accents and barely spoke English,” she continued. “It was still a bit hard, it’s not that anybody was going around with a Jewish shawl around their neck. That was my mom’s childhood, being secretly kosher and things like that. And now here I am, being very publicly Jewish and being on television and telling her story and it’s… it’s hard. It’s hard and frightening.”

Wong’s parents managed to escape from Cambodia during the genocide in the ’70s. “[They] never talk about it. I knew that they were from Cambodia, but I didn’t know what happened there, and I was very confused with my own identity because we were also Chinese,” she explained.

GLOW has been praised for nailing the complexity of Asian identities, as opposed to many other one-dimensional Asian representations in pop culture. “There was no representation at all [growing up]. Chinese-Cambodian is very specific, but even the Asian-American or Canadian identity was not really on TV,” Wong said.

After some interesting one-on-one segments in season two, this episode was the first instance where the show addressed how playing stereotypes in the ring affects the characters as a group. “This is set in the ’80s, so even more so, we’re playing these stereotypes,” Wong said. “As an actor, I read for a lot of very stereotyped characters. It’s very unfulfilling to feel like you’re reading for the same character description that breaks down every time. It’s disheartening.”

She continued, “It was really amazing to reach a level in season three where Liz [Flahive] and Carly [Mensch], our showrunners, said, ‘Well, we really wanna go deeper into this, and it’s time to do that with these characters and to address the stereotypes.’”

And the feedback has been overwhelming.

“What I really loved about this episode is that it’s really for the future,” Wong added. “I can’t think of anything that I’ve ever watched where you see two people sharing something that they’ve inherited but they’ve never been able to put into words. Wouldn’t it be amazing if we could do that more in the world, where we just sit around a fire and share feelings and not be defensive or attack each other?”

Both Wong and Tohn were tightlipped about season four, which Netflix is yet to greenlight. What would they like to see in a new chapter?

“I like the direction we’re going. I like that we’re opening new lines of dialogue and that we’re having conversations. Quite honestly, I’d like to see the conversation continue,” Tohn said. “[I’d like] more and not just going like, ‘Okay, we talked about it. We’re good.’ By the way, a Melrose and Jenny’s parents episode would be great.”

Tohn continued, “It’d be Holocaust and Cambodian genocide survivors sitting around the table having nothing in common but to have been through the same atrocities. And our show would somehow make that funny.”

GLOW season 3 premiered on 9 August and is available to stream on Netflix.