Fear Street: 1666 Highlights the Link Between Witch-Hunts and Persecution of Queerness 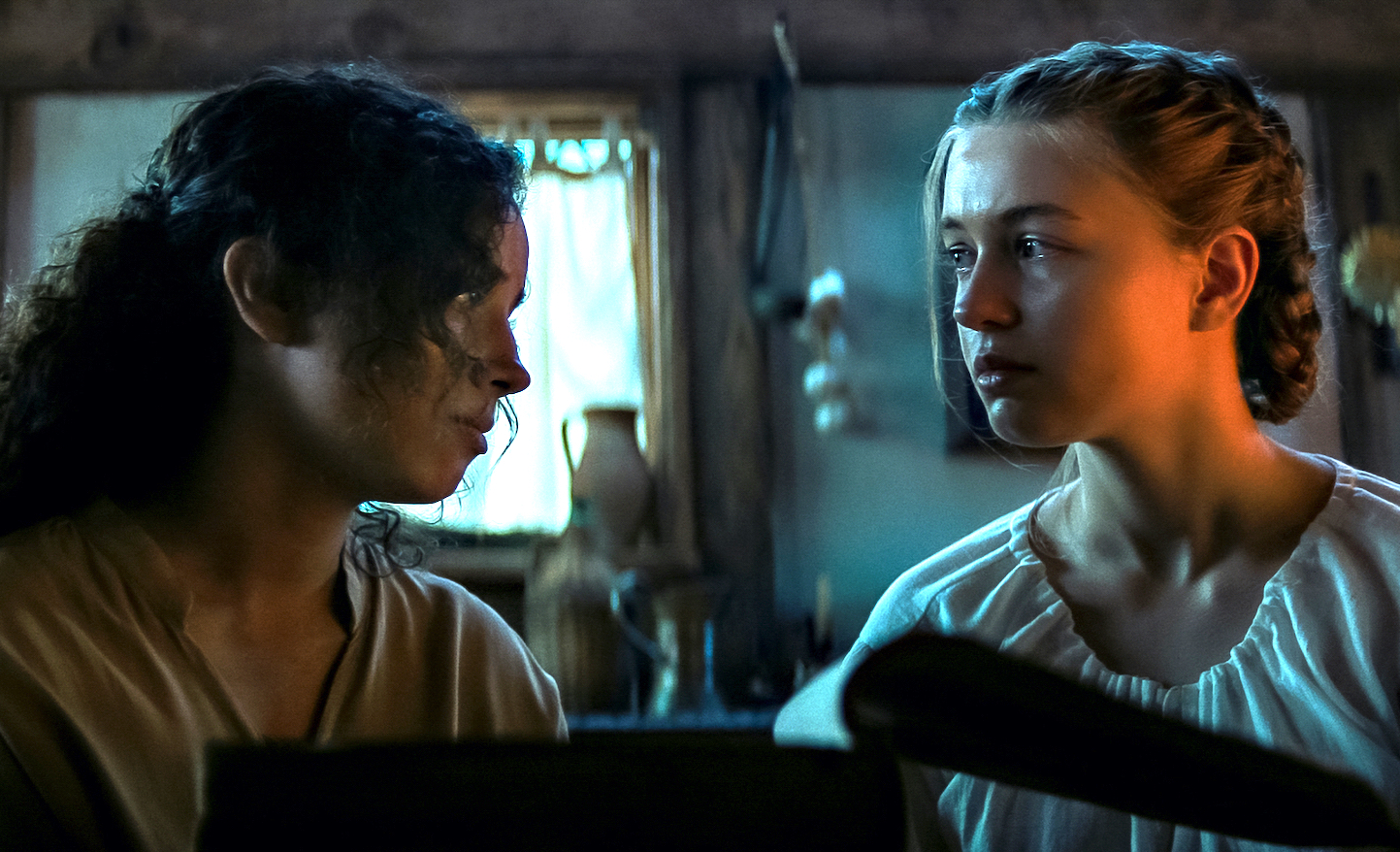 The final installment in Netflix’s film saga inspired by R.L. Stine’s book series, Fear Street Part Three: 1666, takes protagonist Deena (Kiana Madeira) back to where it all began. She inhabits the body of Sarah Fier, the witch who is said to have started the curse plaguing the town of Shadyside, tying together the loose threads left behind by the first two films, set in 1994 and 1978. In a long vision that makes for the film’s strongest act, Deena relives the last days of Sarah’s life and makes valid points about the dynamics at play between powerful, straight men and rebellious, queer women.

“They think we’re guilty, so we are,” Sarah’s lover Hannah tells her. Hannah’s disheartened words sound like a death sentence pending on their heads. In the eyes of those calling the shots—the pious men of colonial settlement Union, later divided into the grim Shadyside and the wealthy Sunnyvale—the two young women are witches. The accusations of them worshipping the devil stem from something as pure as love, but their queer romance becomes a scapegoat for a streak of demonic possessions.

In the first two films of the trilogy, the Shadyside’s witch is presented as a threatening, bloodthirsty creature and the mastermind behind the town’s grisliest murders. 1666 sets the record straight on Sarah, more than just another scorned woman. A popular trope in the supernatural genre, the wronged woman exacts her revenge on an unfaithful lover from beyond the grave. Part Three puts a spin on the trope, having a queer woman like Sarah Fier suffering a betrayal and subsequently haunting not a lover, but a greedy, entitled man who has posed as her friend to hide his true nature.

The saga’s biracial, queer protagonist retraces the steps of Sarah, in love with another woman at a time when people were executed for deviating from what was considered the norm. Deena’s girlfriend Sam (Olivia Scott Welch) doubles up as Hannah Miller, the pastor’s daughter who can no longer hide her attraction to Sarah.

The two young women reveal their feelings for each other, a moment culminating in a beautifully directed, intimate sex scene in the woods. Sarah and Hannah’s romance is rooted in trust and mutual respect but is also a political act, a rejection of heteronormativity—and that’s exactly what prompts a witch-hunt after Sarah goes on the run.

Despite that the expression has been coopted by conservatives to refer to so-called cancel culture, witch-hunts have historically targeted marginalized groups. In the 1600s, women were expected to fulfill to the traditional role of wives and mothers and abide by the patriarchal system, no questions asked. Female pleasure wasn’t acknowledged nor discussed, unless it catered to the male desire. Excluding the male-gaze-y element from the equation in the way Deena/Sarah and Sam/Hannah do poses a threat to male power. This has resulted in women being accused of witchcraft and worshipping the devil for subverting the supposed natural order, enforced by church and crown. 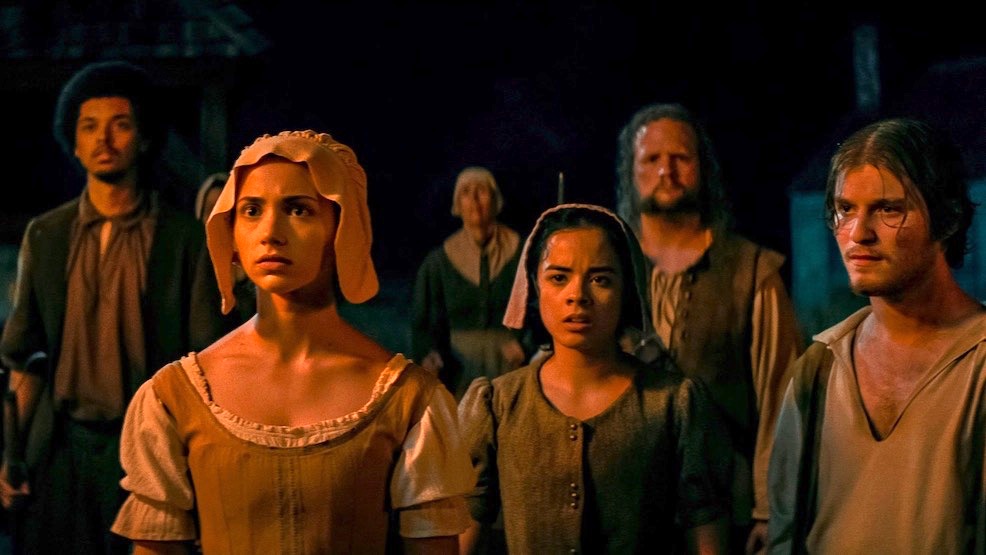 As feminist theorist Andrea Dworkin wrote in Gynocide: The Witches, “witchcraft was a woman’s crime.” And, even more so, a queer woman’s crime.

In Kilbarchan, Scotland in 1649, a woman named Maud Galt was accused of witchcraft after entertaining a (potentially abusive) relationship with one of her two servants, Agnes Mitchell. The servant, who worked in the family home Galt shared with her husband John Dickie, had lodged a complaint against Galt at a Kirk Session, a church court, in September of the same year.

In The European Witch-Hunt, Julian Goodare stated that Galt’s case demonstrated “the shocked authorities found the idea of witchcraft easier to cope with than lesbianism.”

The charges against Galt ran several pages, but her case may have been dropped as there’s no evidence of a commission gathered for her trial. This is unusual for a country like Scotland, where 2,500 people—the vast majority of them women—were burned at the stake between the 1500s and 1600s.

Although not always officially documented, it’s safe to assume that many more women who were accused to be witches in Europe and North America were considered dangerous because of their sexual preferences. But such examples don’t just stay in the past. In present-day Cameroon, for example, belief in witchcraft is widespread, and LGBTQ+ people are sometimes thought to be carrying evil spirits. According to Reuters, family members “regularly take the law into their own hands, torturing, raping and murdering gay and lesbian relatives that they are convinced are witches or have been cursed.”

However, same-gender attraction is still linked to malevolent forces in several religions, even if not specifically connected to witchcraft. Religious leaders across the US and Europe feed the harmful narrative of queerness as against god and/or nature by publicly blaming the LGBTQ+ community for natural and man-made disasters. Even the Covid-19 pandemic was deemed divine retribution for engaging in queer sex. Not to mention that the International Lesbian, Gay, Bisexual, Trans and Intersex Association (ILGA) found that being LGBTQ+ is still criminalized in 69 countries and punishable by death in 11—in many of these, the laws prohibiting same-sex relationships originate from colonial times.

1666 reignites the discussion surrounding witchcraft and queerness. Unlike the protagonist of Robert Eggers’ 2015 tale of witchcraft in the 1600s, The VVitch, Sarah Fier is aware she can’t escape as she’s already guilty in the eyes of the male, white settlers. Fier sacrifices herself to save Hannah and warn Shadyside from the man who betrayed her and the whole community. It is a conclusion far less delicious and bold than the finale of Eggers’ movie, but, sadly, one that mirrors the trials and tribulations of many real-life women accused of worshipping the devil.

The Fear Street trilogy is streaming on Netflix.